Maine's many islands and harbors beckon

Off-season is a time for discounts and locals 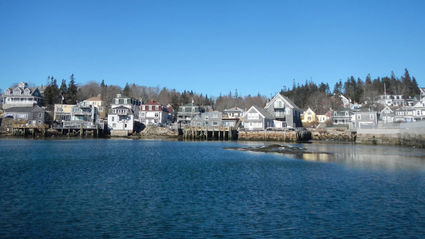 The harbor of Stonington, Maine, is a working fishing harbor with lobster boats coming and going. It's the No. 1 lobstering port in Maine, bringing in the most landings of lobster. The Inn at the Harbor is center in the photo, on the dock with the pilings.

I thought the older couple coming into The Harbor Cafe in Stonington, Maine, on Deer Island, for the Monday night two-for-one $19.99 special was going to bolt and run at the sight of strangers. It's off-season in Maine and locals yearn to see only locals about town, but there we were - enjoying that same special.

"People here really expect a break from the tourists at this time of year," says Dana Durst, who along with Jay Brown owns The Inn On The Harbor in Stonington (www.innontheharbor.com).

Quiet it was, for we had the inn all to ourselves for two nights along with a commanding view of the working harbor for just $100, more than half off the rate of the summer season.

I had to laugh at residents' complaints about the number of tourists because I told them about Skagway, a city of about 890, that receives about 900,000 people off the cruise ships, and every summer that number swells. They were mightily impressed

Intricate shoreline and a multitude of islands

The Maine coastline will seem like home to Alaskans. Its shoreline is almost as tortured as Alaska's, although Alaska has the most miles of coast at 33,904 miles compared to Maine's 3,478, but Maine beats the number of Alaska islands (3,1660) with 4,600 islands.

These dots of land protect ports nestled in tiny coves and inlets from the ravages of the sea, and in Stonington, a boat must travel close to three miles to get to open water.

Thickly forested, the islands can sometimes be reachable at low tide. We did try a hike to Barred Island and made it three-quarters of the way to the beach but the trail was gnarly with roots and large stretches full of ice that we had to walk around or penguin-step across. Plus the sun was going down and although we had flashlights we didn't think it was smart to continue.

The island has many such walks (visit http://www.islandheritagetrust.org/visit.html) and the trails are usually on soft moss and occasionally boardwalk.

For lighthouse lovers there's a trail of eight lighthouses on Deer Island, see https://www.deerisle.com/the-deer-isle-lighthouse-trail or you can take a boat tour with Old Quarry Ocean Adventures.

The U.S. Lighthouse Society offers a blue Lighthouse Passport (available at inn and other tourist locations) that you can have stamped just like a U.S. Passport.

Like the Pacific Northwest, Maine has extreme tides that reveal a multitude of sea creatures. Stonington is just 124 miles south of the Bay of Fundy, home to the most extreme tides in the U.S. that range from 11 to 54 feet.

I always feel the most confident about the seafood I'm eating when I'm looking at the sea and then shift my gaze to the plate and know it hasn't traveled far. I want it fresh and I want to know where it came from - that's how Alaska spoiled me.

Bruce ordered a seafood platter at the café and it came piled with shrimp, clams, scallops and haddock for $29.99. We split it and it was more than enough.

The inn also offered a free breakfast that was very substantial with homemade rye toast that Jay baked, a crust-less quiche, orange juice and coffee. The jams were made with island blueberries and raspberries, and on the French toast we had one morning, local maple syrup.

A history set in stone

Like so many coastal towns in New England, one of Stonington's main economic engines were the granite quarries that attracted foreign workers to come and settle there after the granite boom of 1870. At first it was the Irish who emigrated, then it was the Italians, world-renowned stonecutters and masons (hence the many Mason Lodges along the coast).

The town's impressive Opera House is more than 100 years old and was originally a music and dance hall but now houses programs that offer theater, music, dance, film and community events.

After the bust in granite quarrying due to the rise of steel as the preferred building material, Stonington began to attract more summer cottage people, and eventually, tourists came looking to find the "real" Maine. 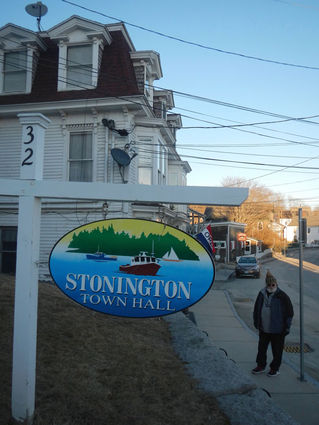 The Town Hall is located right downtown. In fact, just about everything is downtown in this small town.

And Stonington is unique as one of the few places that has no cell phone service and there's no computers for use at the town's bright and neat public library.

In the summer, tourist's vehicles clog the small interstate highway No. 1 that travels along the coast and through small towns and villages so quaint they make your teeth ache.

Retirees are also attracted to this location with housing prices quite low. I was ogling a house with two apartments for $86,000 and dreaming of sitting on the front porch and watching the sun go down over the inlet, while the upstairs as an Airbnb would pay the mortgage. Not gonna happen.

I have a soft spot for Maine after spending many childhood summers hiking Mount Katahdin, the highest in the state at a mere 5,267 feet. Its name comes from the Penobscot Indians who called it "The Greatest Mountain." Yes, like "The Great One" - Denali.