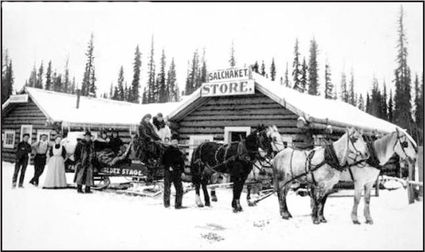 Marshals and volunteer deputies accompanied those convicted of insanity from Fairbanks to Valdez in horse-drawn stagecoaches during winter.

Imagine being deemed insane through a jury trial, and then sent to the Lower 48 for treatment in the dead of winter before planes and automobiles were available to transport you south. That's what happened to some Alaskans at the turn of the last century.

The opening of the Alaska Psychiatric Institute in Anchorage in 1962 marked a dramatic change in the way Alaska handled those who suffered from mental illness. Construction of the facility meant Alaskans might find treatment for their mental illnesses without traveling outside the state. Prior to that, however, those with mental illness were shipped off to Morningside Hospital in Portland, Oregon – and most families never heard from their loved ones again. They became known as "The Lost Alaskans."

Morningside, founded in 1899 by Dr. Henry Waldo Coe, was awarded a contract from the U.S. Department of Interior to care for mentally ill and mentally handicapped patients from Alaska. At the time, mental illness was considered a crime and Alaskan adults and children were arrested, convicted of insanity and sent by the federal government via dog teams, stagecoaches, ships and trains to live at Morningside. Between 1905 and 1962, the hospital admitted about 3,500 Alaskans.

Records show that some sent to Morningside did not suffer from mental illness at all. Some orphaned children and a few people who had contracted tuberculosis were sent there, as well. And missionaries arranged to have one 17-year-old boy shipped out of Anvik due to epilepsy. His family never knew what happened to him after he left his village.

The procedure for determining mental illness was rather simple back in the day. A person said to be mentally ill was brought before a jury of six people who would rule him sane or insane. If he was found insane, he then was sent to jail until his release or transfer to Morningside. Nowhere in this process was a medical or psychiatric examination required.

Oftentimes jails housed both criminals and the insane until their court hearings were held, which could take up to a year at times due to the early practice of traveling courts. Once convicted, marshals would advertise for honest civilians looking for a paid trip to Seattle who then would be hired as temporary deputies to help take the "prisoners" south.

A Fairbanks Daily News article titled "Insane Patients Soon to Go Outside," published on Dec. 17, 1908, was typical of the announcements placed in the newspaper when the marshals needed to find volunteers to help escort the insane out of the territory.

"Marshal Love stated today that he was now perfecting plans for sending the patients outside and that they will go over the trail shortly after the first of year, if no hitch occurs in court proceedings."

Once arrangements were made, the marshal would deputize guards who wanted to go "Outside" and were willing to undertake the delicate task of handling the patients.

"These men, will, of course, be paid their expenses and a per diem for the trip, and it affords an opportunity for those who are desirous of getting out, if they are of sufficient responsibility to meet the marshal's requirements," the article stated.

The deputies often transported actual criminals and the insane together. They traveled by horse-drawn stagecoach or dog team from Fairbanks, where winter temperatures routinely dipped to 50-below, along a 400-mile-long trail to Valdez. There they boarded ships to Seattle, and then continued on by train to Oregon. Sometimes the volunteers kept all the "prisoners" in restraints – and once in a while one had to be strapped to a cot for the entire trip due to his insanity and violence.

Some sent to the hospital responded to treatment and returned home. But many died without ever seeing their loved ones again.