One woman's junk is another woman's dream project 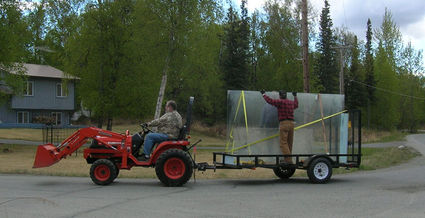 The long-awaited transfer of a five-by-seven foot glass panel gets underway.

Since our move back to Palmer from Slana in 2011, I try to ride my bike around our subdivision on a daily basis unless the roads have ice and snow or if it's very windy. One day while riding in early spring of 2013, reflecting sunlight in one of my neighbor's back yard caught my eye. The next day, I slowed down to discover the source - a very large pane of glass leaning against a shed.

My bike rides serve several purposes. They are great exercise and I thoroughly enjoy being outdoors while watching the seasons change, but many days I also catch myself daydreaming or processing difficulties. I found myself thinking about that pane of glass and decided that the owners must not value it or they wouldn't leave it unprotected. Summer arrived and the tree leaves blocked any reflecting light. That fall after the leaves fell, I noticed it was still there and soon found myself thinking about how it might look as part of a glass greenhouse.

My husband Gary and I have lived in many locations in Alaska and over the years he has built a total of four greenhouses, each one different from the others. One house we moved into had a wonderful greenhouse already attached to the main house. We've learned much about design through our experiences. Now we are living in what we call our "forever" house. As in, we hope not to have to move again unless it's to the Pioneer Home.

Daydreaming during my bike rides, I soon had a wonderful greenhouse designed, with that large pane as the focal point. The next spring, I noticed a woman in the driveway of the house that had the glass panel. I rode my bike up to

her, introduced myself and asked, "Would you consider selling your glass pane out back?"

We walked back to take a look. I learned it was single paned, bigger than I'd imagined at 5' x 11', and apparently new underneath years of dirt. A still readable shipping label on one corner provided all the pertinent information. The woman said the glass was sitting there when she bought the house years prior and would give some thought to my question. Once home, I called a local glass company, gave the particulars and learned it would cost over $1,000 plus shipping to order at current prices.

A few weeks later, we again talked in the woman's driveway and she said she wanted $125. This time I got her name and phone number and told her I was definitely interested, but had to wait until our Slana house sold. I went home and presented the idea to Gary for the first time, who promptly told me he was finished building greenhouses, especially anything with that big of piece of glass. So, I put my dream on hold.

During the fall and the next spring while riding my bike, I checked to see if the glass panel was still there. Finally, during the summer of 2015 our Slana house sold and by spring of 2016 I had created a plan on draft paper, got Gary's okay to work with a builder who attends our church, and called the woman with the glass pane. The new greenhouse/shed would be attached to the south side of our detached garage.

My design called for four additional tall, narrow windows and fortunately just before the builder "broke ground" I found what I needed at a garage sale for $5 each. By early May, I was excited to see the exterior of the project complete-fruition of a three-year dream. We would do the flooring and interior finishing ourselves later.

One of the very last parts of the construction was to place the large glass pane into the prepared frame. Gary agreed to use his trusty Kubota tractor to help the builder transport it from the neighbor's place, one street over from ours. The biggest challenge came as the builder and his helper carried it over uneven ground, from the shed to the trailer hooked to the tractor. Once tied down, the slow ride home was uneventful and everyone breathed a sigh of relief when it was secured in place without mishap.

For two seasons I've grown delicious tomatoes and cucumbers with enough to share, especially with the woman who sold me the glass. As I gear up for another growing season in my beautiful new "forever" greenhouse, I am thankful that one woman's junk is another woman's treasure.