My heart is in the Highlands

Walking and drinking your way through Scotland 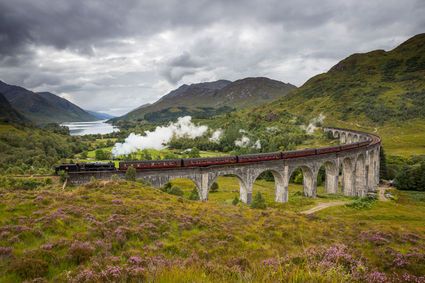 The Jacobite steam train passes over the Glenfinnan Viaduct at the head of Loch Shiel, Lochaber, in the Highlands of Scotland.

Scotland is a natural for Alaskans-mountainous, cold, windy, vast stretches of color in the fall, and Robbie Burns celebrations on his birthday in January complete with haggis (see description below).

Pretty safe too, with no reports of terrorists attacks.

And there's lots here to do from quirky winter traditions, to even quirkier foodstuff (like haggis) and long stretches of shoreline to hike. And of course double malt Scotch whiskey. Take a tour of a distillery and get a dram for free!

I once had a blood sausage at a Glencoe hostel and it stayed with me for many days, but that's the fare of the British Idles - something fatty and dense to get you through the bone-chilling weather. Back to haggis, which is a savory pudding containing sheep's heart, liver and lungs minced with onion, oatmeal, suet, spices and salt, mixed with stock. It used to be encased in a sheep's stomach, but now it's usually an artificial casing.

Why then go to Scotland? Because the people are great and very welcoming and there's centuries of history to relish in its castles, churches and battlefields. The clash of the clans marked a bloody period of its history.

And if you've always known you're Scottish or recently found out through one of the DNA firms you mailed your sputum sample to, then you can come away wearing your family's tartan colors and sport a kilt whilst cross-country skiing on your return. See http://www.visitscotland.com/see-do/research-your-ancestry/#research.

Winter is a cheap time to travel to Scotland and Edinburgh offers a wicked end-of-year party called Hogmanay. Specials are offered through the city's travel center at edinburghshogmanaytraveloffice.com for two- and three-night packages from £199 ($284US) per person, which include city center accommodation, street party tickets and breakfast.

Hogmanay is the word for the last day of the year and is synonymous with the celebration of the New Year. Its origin is not sure, but it's thought it's probably Norse, hence the popularity of Viking headgear and clothing. The party starts on December 30, when up to 40,000 people walk through the city during the celebration.

Edinburgh's Hogmanay fireworks sees in the New Year with fireworks at midnight from Edinburgh Castle on December 31, followed by a plunge into the River Forth in fancy dress on New Year's Day - perhaps a hangover cure.

The Fife Coastal Path stretches for 117 miles from the Firth of Forth in the south, to the Firth of Tay in the north, a walking adventure that winds through quaint seaside fishing towns. The path offers different levels of exertion from easy to difficult. Visit http://www.fifecoastalpath.co.uk for more information.

In Elie Bay, stay at the Ship Inn (www.shipinn.scot) for $130 US a night with several rooms overlooking the town harbor. Elie Bay is in the Kingdom of Fife, facing Edinburgh across the Firth of Forth, which sounds like a Marx Brothers routine.

Its celebrated pub, of course, serves a fine plate of fish and chips of local catch. There are also plenty of dishes for meat lovers, touts the Inn: pork belly, lamb rump and Scottish-sourced meat, which is dry-aged on the bone for a minimum of 32 days - certainly something to taste.

There's a cricket pitch on the beach from April to September. Witness this quintessential English sport. Maybe someone can give you an explanation.

Yes, there's a steam train for all you "foamers" (steam train enthusiasts) to ride through the heather and across a lovely trestle.

The Jacobite train's name refers to the Jacobite Movement that saw Great Britain and Ireland attempt to restore the Roman Catholic Stuart King James II of England and Ireland (as James VII in Scotland) and his heirs to the thrones of England, Scotland, France and Ireland in the 1600s.

The steam train runs a distance of 41 miles between Fort William and Mallaig, passing through an area of great scenic beauty, including alongside Loch Eil, Glenfinnan Viaduct and Arisaig.

This route is also the same shown in the Harry Potter films with the company that runs the service having provided Warner Brothers with the train used as the Hogwarts Express and using the Jacobite's route for filming. The locomotive used to pull the Hogwarts Express in the films, the GWR 4900 Class 5972 Olton Hall, is presently located at Warner Bros. Studio Tour London, where you can watch "The Making of Harry Potter" when taking the studio tour. Sounds like something your grandchildren might enjoy too.

From Maillaig you can hop a ferry to the Isle of Skye and the Small Isles. See http://www.calmac.co.uk/article/2121/Skye for ferry times and tickets.

Go have a dram

Scotland produces the best single malt Scotch whiskeys in the world. There are many distilleries to visit where you can have sample of a "wee dram" - a shot, but a "wee dram" sounds much more genteel.

A friend in Skagway once bicycled a route in Scotland with stops at many distilleries and outdoor "naps" along the way.

As luck would have, there is a distillery right at the start of the train route. 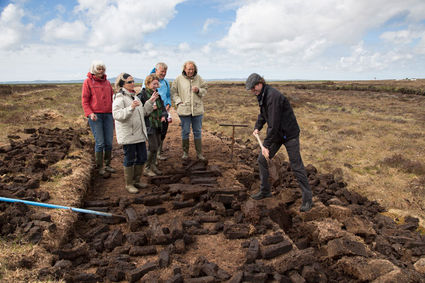 Cutting peat is very labor intensive, but oh what warmth comes from the fire it fuels.

Fort William is home to the Ben Nevis Distillery ( http://www.bennevisdistillery.com ), one of the oldest licensed distilleries in Scotland, established in 1825. The distillery is nestled at the foot of Britain's highest mountain, Ben Nevis (ben literally means mountain peak) with a summit elevation of 4,406 feet.

Single Highland Malt Scotch Whiskey is built on pure water, barley and yeast, with a measure of peat smoke or reek from the fire smoke that is absorbed by the whiskey.

And should you hop over to Isle of Skye, there is a distillery that is revered among single malt whiskey connoisseurs-Talisker ( http://www.isleofskye.com/attractions/visitor-centre/talisker-distillery ) in the village of Carbost. A tour costs $14 and lasts 45 minutes, although they offer an extended Talisker tasting for $35 and lasts for an hour-and-a-half.

Perhaps it includes a recovery period.