Ruby was once the Gem of the Yukon 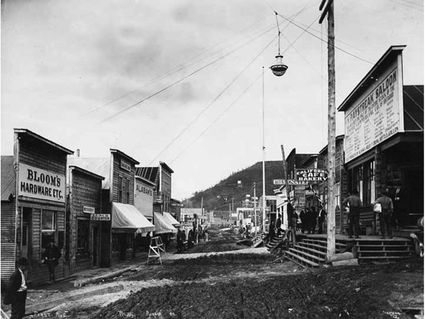 First Avenue in Ruby during 1912 was a hub of activity, complete with electric streetlights.

One northern town became an integral part of Alaska's gold rush history after prospectors sifting through red rocks along a creek south of the Yukon River thought they had found rubies mixed with gold nuggets. They named the new prospect Ruby Creek, although the red rocks turned out to be garnets.

The discovery of large quantities of gold in the creek in 1906 brought even more stampeders into Alaska's Interior. And when word leaked out in 1910 that more gold had been found on Long Creek, about 30 miles south of Ruby, a new gold rush ensued.

By summer 1911 a tent city, nicknamed "The Gem of the Yukon," with a few framed buildings was rising in the wilderness. Other people called it "The Hub of Alaska," as it sat close to the geographical center of Alaska.

At its peak, sources say Ruby's population ranged between 1,000 and 3,000 people after it incorporated in January 1913. The town, located about 50 air miles east of Galena and 230 air miles west of Fairbanks, sported electric lights, telephones, hotels, two newspapers, a post office, two lumber mills, saloons, a movie house and a show hall. There also was scheduled barge and riverboat service on the Yukon River. Ruby rivaled Fairbanks as the center of civilization in the Last Frontier for a few years.

The Ruby Record, a weekly newspaper that merged with the Citizen Newspaper, soon began reporting on a steady stream of gold discoveries in the area.

Prospectors discovered gold on Greenstone and Poorman creeks in 1912, on Swift Creek in 1914 and Moose Creek in 1920. Other boom settlements included Placerville, Sulatna Crossing and Kokrines. Ruby soon became the supply center for the mines that sprang up in the area.

Its heyday was short lived, however. Many men left in 1918 to fight in World War I, then in the fall of that year the Princess Sophia sank near Sitka and many of Ruby's businessmen perished. A fire in 1929 destroyed much of the business district, and then a flood in 1931 destroyed most of the buildings along the waterfront area that had survived the fire. By 1939, only about 139 people remained in Ruby.

Mining still continued in the area after Ruby waned in importance (total gold production for the Ruby area was around 390,000 ounces through 1960). But during World War II, mining operations shut down and most of the miners left. After the war ended, residents of Kokrines relocated to Ruby and its population began to increase to the point that the town incorporated as a second-class city in 1973.

Today Ruby is one of the checkpoints along the northern route of the Iditarod Trail Sled Dog Race and its almost 170 citizens are mostly Koyukon Athabascans of the Nowitna-Koyukuk band, a nomadic group that followed game as the seasons changed.

A huge discovery in 1998 again put a spotlight on the area for a while. That's when Barry Clay, working the same Swift Creek Mine that his grandfather had mined in 1915, discovered the largest gold nugget ever found in Alaska. Clay was operating a bulldozer at the time and noticed a giant nugget rolling off a pile of dirt just ahead of the bulldozer blade.

The nugget weighed in at 294.1 troy ounces. Before its discovery, a 182-ounce nugget found at Anvil Creek near Nome in 1903 had claimed the top spot for nearly 100 years. The largest nugget ever found in the Yukon weighed a little more than 126 ounces.