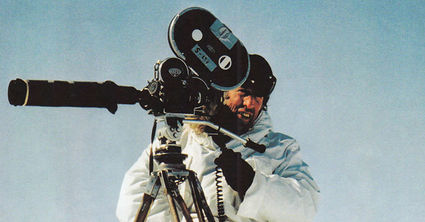 Emmy award-winning Alaskan filmmaker William (Bill) Bacon III, headed North to the Last Frontier in 1946, making a living as a cinematographer and photographer for over 50 years. An animal trainer and cinematographer for Walt Disney Productions until the mid-1960s (Charlie the Lonesome Cougar; Nikki, Wild Dog of the North; King of the Grizzlies and more), he began making his own documentaries in the late-1990s, including Tibet: A Moment in Time and Tibet Hope, films that focused on the exile of the Dalai Lama in 1959 and included unique footage of the people and their challenges in Tibet. Forever grateful for his experiences as a lifelong storyteller and international traveler, Bill has stated, "I've been so fortunate. My camera's taken me all over the world."

Bill passed peacefully in Anchorage in November 2017. Bill's daughter, Karin Trovato, invites all those who loved Bill and appreciated his contributions to cinema in the North to attend a free memorial event in his honor at the Anchorage Museum on May 20, from 6 to 9 p.m. in the Museum Atrium. Food and drink will be served. Along with sharing stories about Bill and gathering great Alaskan friends together, a tribute film, created by devoted friend Reed Bovee, will be shown in the auditorium illustrating Bill's phenomenal life.

"To truly know Bill was to love him - his free spirit, his laughter and his great quests in life," said Bill's friend, Carole Anderson. "I valued him as a mentor and will forever be inspired by his deep humanitarian spirit, focusing his talent and energy in the final decades of his career on projects he considered to be of the utmost importance, including Tibet: A Moment in Time."