Painter makes points with Alaskans, and beyond 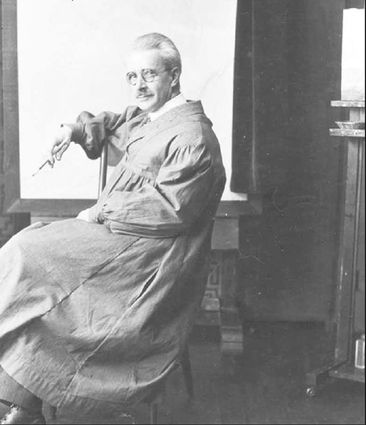 Sydney Mortimer Laurence, who lived and painted in the Anchorage Hotel for many years, became one of Alaska's most respected artists.

Among the memorials in the Anchorage Municipal Park Cemetery stands a small, pink marker adorned with a palette. It is the final resting place of Sydney Mortimer Laurence, one of Alaska's greatest artists, who died in 1940.

Known for his dramatic landscape paintings, Laurence was one of the first professionally trained artists to live in Alaska. His works, which often featured Denali, hang in the Musee du Louvre in Paris, the National Art Gallery in Washington, D.C., and many other locations around the world.

Laurence, born in Brooklyn, N.Y., on Oct. 14, 1865, headed north in search of gold in 1903. He first found temporary work as a photographer in Juneau, but after hearing of gold discoveries in Cook Inlet, he decided to try prospecting there. Christmas postcards from his first wife, fellow artist Alexandrina Fredericka Dupre, and two young sons, Leslie and Eugene, indicate he was somewhere around Tyonek on the northwest shore of Cook Inlet, according to the Sydney Laurence Website.

The then-38-year-old didn't paint much in those first years. Sources indicate he tried his hand at prospecting during summers in various areas of Alaska, including beach mining near Ninilchik on the Kenai Peninsula and at his claim on Poorman Creek near Talkeetna, where he often viewed Denali.

He spent his winters earning money as a photographer. Early Anchorage resident Nellie Brown, a close friend of Laurence, once stated that Laurence had worked with photographer E.A. Hegg in Cordova in 1907 or 1908. He also spent time in Seldovia, Seward and Valdez.

Early in 1913, a group in Valdez "grubstaked" him with $400 (about $10,000 in 2018 dollars) and a letter of credit to paint Denali for an exhibit at the Panama Pacific Exposition in San Francisco. He finished the 6-foot by 12-foot painting of the mountain, titled "Top of the Continent," in 1914 and it remained in the Smithsonian Institution's collection for more than 50 years. It now is in private hands.

The following year, Laurence moved to the new townsite of Anchorage, where he worked as a laborer on the Alaska Railroad, a gold miner and a photographer, taking portraits in the old Carrol Building on Fourth Avenue and E Street. In 1916, he moved his studio to the Harmony Theatre and lived in the new Anchorage Hotel, operated by Frank Reed and his wife.

Belle Simpson, owner of the Nugget Shop at the Baranof Hotel in Juneau, gave a boost to Laurence's career as an artist after she bought a small painting of Denali from a man who said he had bought it at a camera store in Anchorage. Simpson thought the painting was amazing and wrote to Laurence, telling him to send her as many paintings as he could provide.

Laurence opened a studio in the Anchorage Hotel in 1920, where he continued his portrait work. But by 1922, his paintings had become so popular that he closed his photography studio and started painting full time. He soon became recognized as Alaska's most prominent artist.

He opened a second studio in Los Angeles in 1924, where he met and married Jeanne Kunath Holeman, a young French painter, in 1928. The couple spent the rest of their marriage living in California during the winters and in the Anchorage Hotel during most summers.

"This is my last day on earth," he told his wife. When she protested that he was just tired, he replied that he felt life was slowing oozing out of his body.

According to an article in the Anchorage Daily Times, Laurence went to the barbershop that afternoon and told his friends that he was "getting prettied up to die." He had a haircut and a shave, then turned to the mirror, saluted his image and said, "Goodbye, old boy."

He then asked for a private room at the hospital, because "the hotel doesn't like stiffs hanging around."

Sources say he ate a "hearty dinner" and was in good spirits when friends visited him that evening. When his wife bid him goodnight, he said, "It's goodbye this time. I won't be here tomorrow."

His premonition was correct. Laurence died that night. His nurse said she had never seen anyone leave this earth with such grace and dignity.

This column features stories from late Alaska historian Phyllis Downing Carlson and her niece, Laurel Downing Bill. Many of these stories fill the pages of "Aunt Phil's Trunk," a five-book Alaska history series. Books are available at bookstores and gift shops throughout Alaska, as well as online at http://www.auntphilstrunk.com and Amazon.com in both print and eBooks.