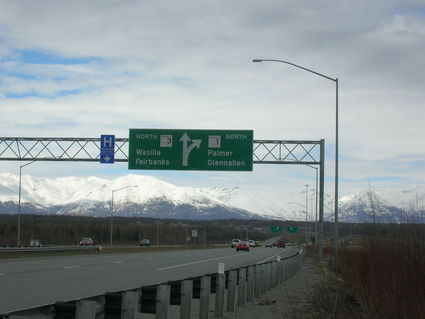 How many of us know the highway numbers of the Alaska roads we travel and rely on?

My husband, Gary, and I sat visiting with two couples after dinner one June evening several years ago. At the time, we were operating Nabesna House B & B out of our home in Slana. One gentleman asked, "Is there more road construction on Highway number 1?" He was greeted with a couple of blank looks and then we had to ask, "Which road is number 1?"

This was our fifth summer to accommodate bed and breakfast guests and the questions were usually in regard to traveling north or south on the Tok Cut-Off or driving out to the end of our graveled Nabesna Road. Road numbers versus road names were not an issue, until that June night.

One of the couples had lived in Alaska for 20 years. They were out from Anchorage to use their four-wheelers on trails in the Wrangell St. Elias Park. The nearly two inches of rain received that day had not dampened their spirits. The other couple, on their first Alaskan adventure from Seattle, was planning to see and photograph the sights along the highways. Lousy weather had ruined their hopes of a flightseeing trip out of Gulkana and they thought it was a miracle their rented car made it through the Chistochina road construction.

After some discussion, the man from Washington, who had asked about Highway number 1, heated things up a bit when he said that the highways had been given numbers to make it easy, that the numbers were posted all along the roadways, that there weren't that many of them, and frankly it shouldn't be that hard to learn them.

Our Alaskan guests and Gary, argued that the roads had names, that everyone knew them, and there was no point in learning the numbers. As the debate proceeded, I thought about how Gary and I followed highway numbers during our recent travels in Louisiana and Colorado.

Eventually the whole thing seemed important enough for me to produce my trusty, laminated Alaska map from the 2001 Milepost. As we got our bearings with the map, I traced my finger along what I thought I knew: "Highway 1 must start in Anchorage and continue..."

"No," our Washington guest responded, "It starts way down here in Homer." It was then that we Alaskans discovered that the numbers do not necessarily correspond with the names we know, and in some instances overlap more than one named highway. Highway 1, it turns out, could be restated as the Sterling, Seward, Glenn, a few-miles-of-the-Richardson, and the Tok Cut-Off Highway.

The gentleman from Washington had won possession of the map by now. We asked him, "Does the Denali Highway have a number?" "How many highway numbers are there?" The highest number we found was number 11, but both the Seward and Steese Highways were labeled number 6. There wasn't a number 9, though, so maybe one of those sixes was upside down. This was all quite confusing. "How about that highway over by Nome?" "Are the ferry routes numbered?"

Our number-loving guest, a computer programmer, tried his best to answer our questions, and then came up with one of his own. "Hey, this number 10 Highway near Cordova begins and ends in the middle of nowhere, and then here's another separate section of number 10 by Chitina. What's up with that?"

One of the Alaskans asserted that Cordova was a great place, certainly not the middle of nowhere, but as it grew late, we also gave in a little and acknowledged that we should learn the highway numbers. We even jokingly agreed to be ready for a test in the morning, which luckily didn't materialize, and all our guests parted friendly and set out on their separate adventures.

That very afternoon a woman called to make reservations and I asked her which direction she was traveling. She said, "We're in Denali Park and we'll be taking Highway number 8, then 4, and then 1. Does that sound correct?"

"I'm sorry," I replied, "but I haven't learned the numbers yet. I think you might be taking the Denali Highway, turning right onto the Richardson Highway, and then taking a left onto the Tok Cut-Off."

Our previous guests would probably have been disappointed in me – I hadn't studied the numbers enough to pass my first pop quiz from a tourist.