Lovers of lighthouses, light up

Stay or volunteer at historic lighthouses 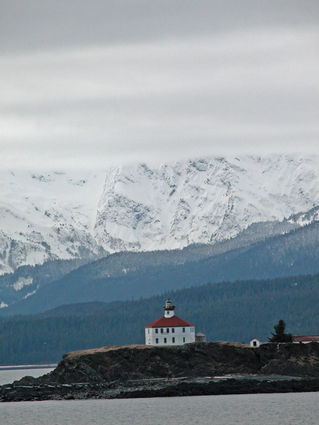 If you watch public television's Rick Steve and his travel show, he always points out how travel helps him to understand people all over the world and that it broadens his mind.

Good thoughts for sure, but I like to think of travel as I age as an adventure challenging me to actually get up and go somewhere else before I just fall apart or lose my reasoning. Oh, and to activate new brain cells, too.

We've chosen to a trip that is more engaging than sitting in the car for hours like we did on the trip to Alaska last summer.

This summer we're volunteer lighthouse keepers on Thacher Island off Rockport, Massachusetts, doing whatever needs to be done like painting, collecting dead seagulls, weed-whacking, selling day-trippers trinkets, and helping them on and off the island.

We'll have an apartment in the assistant keeper's house, complete with a kitchen and private bathroom. There'll be the usual challenges with island living-bringing enough fresh water to drink, getting on and off the island if the weather is so snotty the boat can't land at the floating dock, and wearing a wide-brimmed hat to catch seagull guano. Thacher has a major breeding colony.

These twin lighthouses were the ones I would stare at as a kid on the beach and wonder what it was like and soon I'll be sleeping there for a week.

You too can enjoy a lighthouse stay or connect with lighthouse organizations in Alaska.

Alaska's lighthouses and their keepers

Many of the state's lighthouses have been given or purchased by local lighthouse associations.

My favorite, Eldred Rock Lighthouse, is just down the way from Skagway and Haines on Lynn Canal and is most unusual. An octagonal building with a bright red roof, it is spectacularly scenic with its backdrop of the Chilkat Mountains.

I once did a boat ride behind the island and there's a seal haul-out and lots of marine activity to watch, but a ferry ride to or from Juneau to Skagway or Haines will give you a good view.

It had a fourth-order Fresnel lens at the top of its 56-foot tower with two bulls-eye panels that was replaced by an automated light by the Coast Guard in 1973. Fresnel lenses are amazing things, all lights and reflections and, when viewed in a museum, they look like some spectacular spaceship.

The lightkeeper's house was part of the tower, which was the first lighthouse in Alaska to be built of concrete.

In 2018, it was declared by the Alaska Association for Historic Preservation as one of the state's 10 most endangered properties, which qualifies it for a matching grant to help preserve it.

The Eldred Rock Lighthouse Preservation Association of Haines was organized to restore, maintain and preserve the historic lighthouse with hopes of obtaining conveyance of the property from the federal government and begin rehabilitation and restoration. For the future there's plans for a visitor's center and maritime museum.

For more information about the lighthouse association go to http://www.eldredrocklighthouse.org.

As more commercial airlines flew to Alaska, the companies asked for aeronautical beacons along the Alaska coast. A cost-effective way was to add them to existing lighhouses. Rather than build a second beacon on Admiralty Island, in the 1950s the lantern room in its Point Retreat Lighthouse was removed and replaced by an eight-foot-tall concrete block supporting a double-ended airways beacon that produced alternate red and white flashes that served both boats and planes.

In 1973, the station was downgraded to a minor light and the personnel removed. Four years later, a 30-year lease on the property was granted to the Alaska Lighthouse Association, and in 2002, the association received ownership of the buildings and its 1,505-acres. A maritime museum and a bed-and-breakfast are envisioned.

Stay in a lighthouse B&B

The quaint town of Cordova offers a unique opportunity in Alaska for visitors to stay in a real lighthouse bed and breakfast at Cordova Rose Lodge.

The lighthouse is named after Cordova's Odiak slough and, in a classical twist, named "Pharos" after the ancient Hellenistic lighthouse built on an island off Alexandria in Egypt in about 280 BC. Destroyed by an earthquake in the 14th century, it was among the Seven Wonders of the World. 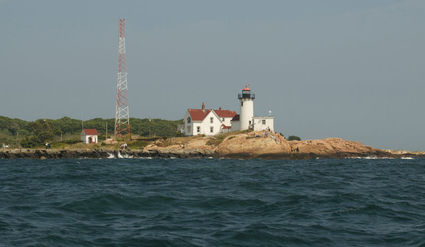 Attention lighthouse fans, name this lighthouse and get a nod in the next column. Email your answers to dimitralavrakas@hotmail.com

The barge Berry No. 1 was built in 1924 and towed to its present location in 1964. Bob and Rose Arvidson, who owned the barge, added a lighthouse in the late 1970s as a navigational aid for Bob as he traveled up the slough, and he got the Coast Guard to make it official.

In 1992, Eldon and Jan Glein purchased the property and started the B&B. Current owners, Gaye and Gary McDowell, took over the lodge in 1998.

Rates, according to its website, are $165 per night, which includes up to two people in a room with an additional person at $45 per night. A complete, full, hot breakfast is an additional $25 per person. The Net Loft Cabin rents for $175 per night and the Admiral's Quarters for $185 per night, plus Cordova's 12 percent tax.

Love lighthouses? There might be a club nearby for you to join. Go to http://www.aklighthouse.org or just get on an Alaska Marine Highway System ferry and sail by some of Alaska's really neat lighthouses.