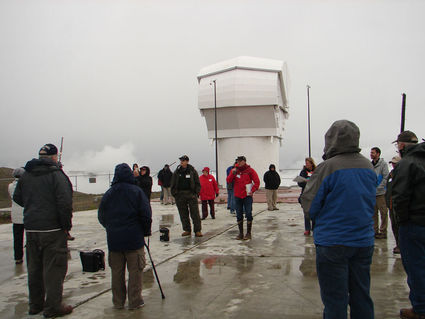 Jim Renkert, former director (in red with microphone), and Greg Durocher, a Site Summit veteran and current FONSS director, explain the mission of a Nike Hercules battery. The unit was active there from 1959 to 1979 and where they are standing on Upper Site Summit was the Integrated Fire Control center and barracks building. The concrete portion of the IFC was retained, but the two-story barracks/office building was decayed to the point they had to be demolished. This photo is from the Aug. 20. 2017 tour. Note the Alaska-unique radar clam shell in the background.

Between 1946 and 1989, the United States and Russia were locked in a confrontation of ideology. Posturing took the form of an unprecedented nuclear arms race during which then-Soviet Premier Nikita Khrushchev declared, "We will bury you!"

Military planners in the U.S. worried that Soviet bombers would strategically position themselves over Alaska in an attempt to attack the rest of the country, and thus, defense from the Last Frontier became a critical element.

Three sites were constructed around Anchorage: Site Point near Anchorage International Airport; Site Bay across Knik Arm at Goose Bay; and Site Summit atop Mount Gordon Lyon in the Chugach Range. It is the latter site, located at what most Anchorage residents know as Arctic Valley, that has undergone an effort to preserve the past, lest we forget.

Friends of Nike Site Summit (FONSS) was formed by local volunteers in 2007 to advocate for the preservation of the area. In 2009, the organization partnered with the U.S. Army, the National Park Service, and State Historic Preservation Officer to preserve the historic mountaintop fortress overlooking Arctic Valley.

Site Summit is culturally significant as the only one of eight Cold War-era Nike-Hercules missile sites in Alaska still standing, says Doris Thomas, public relations committee chair for the organization.

"Tour participants will talk to veterans who were stationed at Site Summit, find out how the missiles were launched, and learn about Alaska's role in the Cold War," she said in an email.

Operating with a mission to preserve and interpret the site for the education of current and future generations about the Cold War, and memorialize the scores of veterans who served during the Cold War, FONSS is a committee of the Alaska Association for Historic Preservation, and works in cooperation with Joint Base Elmendorf-Richardson (JBER).

Friends of Nike Site Summit (FONSS) invites the public to tour historic Site Summit in Arctic Valley this summer. Tour dates range from a dinner/tour fundraiser the evening of Wednesday, June 20; a hiking tour limited to 20 people on Saturday, July 21; and morning and afternoon tours on Sunday, August 5, and Saturday August 18. Bus seats on the latter two afternoon tours are extremely limited due to advance registrations, Thomas pointed out, but the other tours still may have room.

The registration link is:  https://www.nikesitesummit.net/nike-site-summit-tours.html. Those interested in tours can also register via phone at (907) 929-9870.

The tour price includes round trip bus transportation to Site Summit from the Arctic Valley lower parking lot, and ranges from $30 to $125/pp depending on the event and student/veteran/senior citizen status of the participant. Children ages 12 and older are welcome.

To comply with Joint Base Elmendorf-Richardson security requirements, reservations are required no less than 10 days in advance, and participants must provide birth dates, country of residence and driver's license numbers for anyone 16 or older.

Thomas outlined the tour for me. 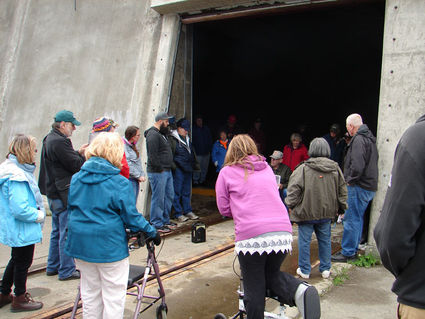 A tour group in August, 2016 look into a launch bunker at Site Summit, outside of Anchorage.

"Our tour guides seek to meaningfully connect visitors to the lives and experiences of those who were stationed here, and ideally, we have one Nike veteran and one tour guide on each bus," she said. "The tour guide provides historical background and context, while the veteran shares their personal experiences of life on a Nike site."

It is important to note that participants should be in good physical condition prior to the tour, finished Thomas. There is standing, walking up inclines on uneven ground, but the group will work with those wishing to visit. She encourages potential visitors to call before reserving a spot.

It is recommended that participants wear sturdy shoes with good ankle support and bring appropriate clothing for ever-changing weather at Arctic Valley.

Erin Kirkland is an Anchorage-based author and travel writer.