Russian shipbuilding rises with the Phoenix 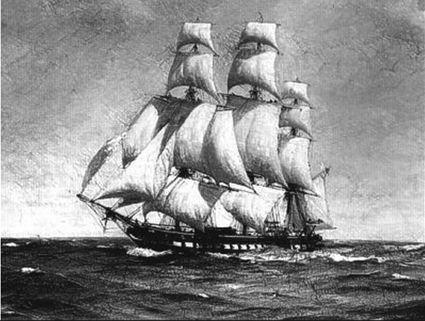 The three-mast Russian ship Phoenix, similar to this vessel, was built in Resurrection Bay. When finished in 1794, it became the first ship launched on the northwestern Pacific Coast.

During July 1791, Alexander Baranof arrived at Kodiak Island to manage the fur exporting operation of Grigorri Ivanovich Shelikhov, who formed the North American Company. When he received orders to build a sea-going vessel, Baranof remembered a sheltered bay he had seen that was a welcome refuge from Pacific storms.

Baranof had named it Resurrection Bay, where Seward now exists, as he had found it during the Easter season. Baranof knew he would have access to timber suitable for shipbuilding, and the rise and fall of the tides would make ship launching possible.

Baranof received a vessel filled with shipbuilding material, including iron, rigging and sails, for one ship, from Shelikhov. The ship's commander, Second Lieutenant Shields, was an American shipbuilder who worked for Shelikhov.

Shelikhov wrote a message to Baranof:

"Herewith we send you iron, rigging and sails for one ship, which you will build with Shields' help. Using him to advantage, you should also begin two or three other ships of various sizes, bringing them to the point where you can finish them yourselves, without a shipbuilder's aid. Everything you need for this will be sent later. Teach the natives to be sail-makers, riggers and blacksmiths."

Baranof's early life in the village of Kargopol, Russia, may have served him well in this new challenge. That region was sparsely settled and quite backward, so one had to learn to improvise to survive.

Baranof, who later would become the first governor of the Russian colonies in Alaska, arrived in Resurrection Bay on board the Severnyi Orel with 23 men, four women and supplies on Sept. 19, 1791. The group immediately went to work constructing dwellings and work buildings, which were finished by the end of that month.

Two summers and two winters went by while Baranof and Shields improvised and invented ways to build the 180-ton, 73-foot-long vessel. The three-mast ship, which was christened the Phoenix (Feniks), had two decks and was completed, except for some deck work and cabins left unfinished, by September 1794. It became the first ship launched on the northwestern Pacific Coast.

The name Phoenix was very appropriate. Like the legendary bird after which it was named, the boat literally rose from ashes, for tons of wood was burned to make charcoal to forge bolts and nails.

His shipbuilders had axes, but no other tools necessary for the task at hand. Not even a handsaw. They used forest moss mixed with hot pitch for caulking, mountain ash for hardwood and whale oil, thickened with red ocher from iron deposits, for paint. It adhered to the wood well and proved to be waterproof.

After the launch of the Phoenix, Baranof built two more ships that were completed in 1795. The Dolphin and the Olga both were 40 feet long, 17.5 feet wide and 9.5 feet deep. They were single masted, single deck ships. The Olga became Baranov's private vessel after Shields taught him navigation.

The Phoenix sailed six times between Kodiak and Okhotsk with loads of fur during the next four years. Then on Dec. 1, 1799, it left Okhotsk bound for Kodiak. This would be her final voyage. Weeks passed beyond her expected arrival date in the Alaska port. Then on Dec. 29, pieces of the ship washed ashore on the eastern shore of Kodiak Island.

Shipbuilding was carried on at Fort Resurrection until 1867, when Alaska was transferred to the United States.