Gulls and guillemots and what not 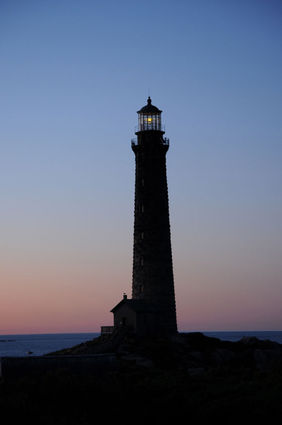 The North Tower lighthouse on Thacher Island, Cape Ann, Massachusetts, was the view from author Dimitra Lavrakas' room while volunteering as a resident keeper at the lighthouse installation.

Last month, Senior Voice travel correspondent Dimitra Lavrakas wrote about various ways to appreciate historic lighthouses in Alaska and beyond. This month, she shares about her recent experience as a volunteer lighthouse caretaker in Massachusetts.

It's sunset on a small, stony 52-acre island, 1.5 miles off the coast of Cape Ann, Massachusetts, and hundreds of seagulls take to trees and roofs to gaze at the setting sun.

The birds do the same at sunrise, which comes at 4 a.m., and the gulls' cries wake us.

Like a religious rite, they seem to wonder at the sun's going down and its return.

The birds own this island, and are nesting with a usual three eggs on their nest or young fledglings staggering about in alarm as I pass by.

Most visitors here are given sticks to ward off the angry birds, but I have a striped umbrella that strikes fear in them and pass unharmed.

The sooty and black backed gulls are just a few of the birds here - there's oyster catchers, black guillemots, swifts, common eiders, Canada goose, and others I can't quite identify, especially the ducks.

Learning to keep a lighthouse

We're intern lighthouse keepers for the Thacher Island Association for a week, learning the ropes, helping to land the work crew and tourist boats.

There's repairs to the aged buildings, and of course making coffee for the work crews. I cleaned the three-room museum and sat as a docent up the 150 stairs on the South Tower, making sure that visitors do not fall down them or climb out on the parapet.

It was hard to get used to being 125 feet up in the air and I had a little thrill of adrenaline when I had to go out and pull the iron door shut.

What do you need to qualify to become an intern? Both Bruce Ware and I have medical training, I have construction skills and Bruce is the former harbormaster of Tenakee Springs and knows the ropes and the ways of the sea. I spent my summers across from the Thacher Island and learned to swim in the Atlantic at an early age. I know that shoreline well.

But I have to say, I felt I didn't do as much as I could, being pretty besotted with the island, its inhabitants and exploring the trails with my trusty umbrella. I think I basically kept Bruce fed so he could accomplish a couple of Herculean feats. I did love that kitchen and the view.

Should you want to volunteer to keep up a lighthouse, remember that it is a volunteer position and you will be thrown in with other volunteers of all personalities. Take a moment when you are frustrated or become angered and walk away to look at the beauty around you.

Thacher Island was named for Anthony Thacher, an Englishman, who with his wife Elizabeth, watched as his four children from a previous marriage drowned as did his cousin Rev. Joseph Avery, his wife and six children, as well as crew members for a total dead of 21. The court gave the island to Thacher, calling it Thacher's Woe, and it stayed in the family for 80 years.

Owning ships off Cape Ann, John Hancock petitioned the General Court and dues were collected from local shipping that paid for towers to be built.

The twin towers were at first but 45-feet high in 1771. In 1790, President George Washington decided that all lighthouses would become federal property. In 1861, the two 125-foot towers were built. The twin lighthouses were fitted with enormous first-order Fresnel lenses, which cost $10,000 each - a large sum at that time. They replaced the system of Argand oil lamps that used parabolic reflectors. The new towers were illuminated on October 1, 1861.

Erected on a perfect north/south axis, they allowed mariners to line up both lights to determine true north.

In 1919, while returning to the United States after the Versailles Peace Conference officially ended World War I, President Woodrow Wilson was on board the passenger liner America with Teddy Roosevelt, and on a collision course with Thacher when its fog horn warned them away.

The Whistle House, now a museum, is essentially a covered cistern used to store water for the steam whistle, and the tracks leading up to it once carried carts of coal to power the steam engine that blew the foghorn. Now they provide shade for nesting gulls.

In 1980, the South Light was automated, the North Light having been shut off in 1932, although there is a light in it now. Unlike the old lights, the current lights do not sweep the water.

Also in 2002 the southern 28 acres of the island and its structures were deeded over to the Town of Rockport by the U.S. Coast Guard. The north end and tower is owned by the U.S. Fish & Wildlife Service and managed by the town on their behalf as a wildlife refuge for, what else, birds. 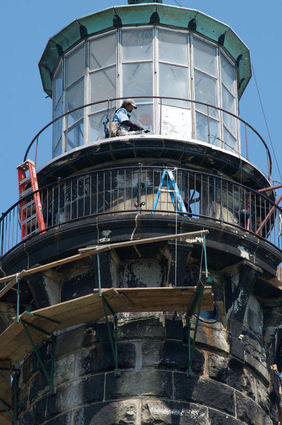 A worker from the International Chimney Corporation of Williamsville, New York, prepares a hoist to bring up supplies for repairs on the tower.

It is also a National Historical Landmark. The Thacher Island Association was established in 1981 by the Thacher Island Town Committee in Rockport, Massachusetts, as a non-profit group dedicated to raising funds for the restoration and on-going maintenance of the island.

The cry of gulls stays with me

Coming back to our inland home after our stay, I swear I can still hear the seagulls and the gentle clucking of the marauding chickens. I miss it.

I think the gulls were onto something in their saluting the sun, and I am reminded of an Inuit saying: "I think over again my small adventures, my fears, those small ones that seem so big, those vital things I had to get and reach, yet there is only one great thing: to live and see the great day that dawns, and the light that fills the world."