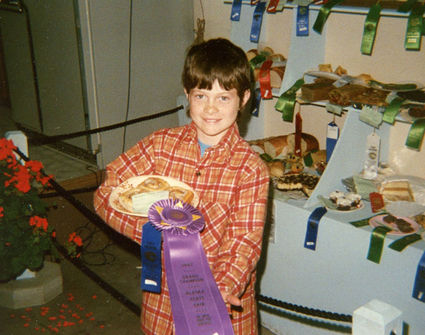 My first experience at the Alaska State Fair in Palmer was back in the mid-1960s as part of a group of young 4-H girls from Glennallen. A couple mothers drove us in to Palmer to see our projects on display and pick them up the next day when the fair was over. I was too young to know how sleeping arrangements were made for the group, but I do remember we all spent the night at Janet Kincaid's home. Current owner of the Valley Hotel and Café and the Colony House Inn, Janet was in the hospitality business way back then.

A few years later, my dad dropped off some of his cucumbers on a trip to Anchorage at fair time. The whole family was happily surprised to find a purple division champion ribbon attached to them when we checked on the return home.

When my husband, kids and I moved to the Palmer area the fall of 1984 and attended the fair for the first time as a family, I didn't realize it would be the beginning of a family tradition. The next year I entered some jams and jellies and a dress I'd made. The kids entered some of their artwork from school and they each made and entered pumpkin pie. This became standard practice each August with some items earning ribbons. In 1987 when Erin entered brownies and Patrick cinnamon rolls, we were excited to find a purple ribbon on Patrick's cinnamon rolls.

I was a stickler for the kids doing everything by themselves, but of course I supervised. When the dough got stiff and hard to mix, Patrick asked me to help. When I told him that if I helped, the cinnamon rolls wouldn't be entered under his name, he decided to keep going on his own. Boy was he proud of that purple ribbon.

Our family's tradition of entering continued and over the next many years several ribbons were earned for Erin's telephone shaped pillow, Patrick's pencil drawing of a tree, Gary's Rhode Island rooster and hen, and my vegetables.

Each year we gave the kids a few dollars to spend on the carnival rides. That would only buy a couple of rides apiece. When they were 8 and 10, a friend enlightened them to the pay-one-price, ride all day bracelets. So for the next few years it was my duty to stand around by the carnival rides and keep an eye on everyone one day each fair. We quickly learned to arrive when the gates opened, because as the day wore on, the lines got horrendously long. According to them, it was still well worth it.

As proud parents, Gary and I watched when Erin's ballet class performed a dance to the song "New York, New York" on the Blue Bonnet stage. Her first "date" was to go with a boy to the "bracelet" carnival rides. When she was older, she and her friends earned money at the Pizza Hut Booth.

We were in the crowd when Patrick won a trophy for one of his remote control car races at the fair. In 1989 when they were 13, he and his friend, George, needed money for their car racing hobby. George got them both jobs at the Chinese food booth. Peeling onions was their first job duty, but gradually they worked their way up to other responsibilities. Of course, we moms provided transportation to and from the fair at all different hours of the day. Patrick went from the Chinese booth to the Coffee Brothers booth, which eventually landed him a position at a restaurant in San Francisco.

After our kids left home, Gary and I only attended once or twice during the 10 days, but we always ran into friends we hadn't seen for a while. We saw one particular couple from the Kenny Lake area three different years in a row -- always unplanned and always on different days of the week. Sometimes friends from out of town would come and stay at our home and we would attend special music events together.

Of course the Palmer fair is not the only one in the state. We have attended the Kenai Peninsula Fair in Ninilchik, the Tanana Valley State Fair in Fairbanks, and the Kenny Lake Fair, but the Palmer fair holds our special memories. Standing at the fair on a clear, crisp early September evening, looking up to see fresh snow on Pioneer Peak was always my sign that fall was nearly over and winter just around the corner.

After our move to Slana in 1999, we were too busy with bed and breakfast guests during August to make the trip to Palmer for the fair, but when our guests inquired, we always recommended they attend. With such a wide variety of events, activities and exhibits, there was sure to be something to satisfy all interests. We also warned them about the traffic congestion, the long lines, and the high likeliness of rain.

With our return to Palmer in 2011, Gary and I found ourselves drawn once again to the fair each fall. I even began volunteering with the floral exhibit entries in 2014 and was inspired to enter some of my own flowers. The next year I was thrilled when my linear design floral arrangement won a division champion purple ribbon! After all these years of competition, I was finally in the same class as my dad and my son.