When Mom doesn't recognize me, I tie a knot and hold on 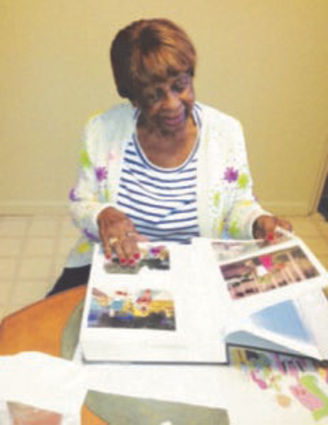 Editor's note: This article is part of an ongoing series provided by the Diverse Elders Coalition, focusing on different senior populations.

I would have never believed there would ever come a time when my Mom – whom I've always described, whenever asked, as my best friend, No. 1 fan, personal "shero" and one who's loved me unconditionally without hesitation or regret for my entire life – would look upon my face and require a few minutes before recognizing who I am.

But as her 90th birthday approaches, I must face the inevitable truth that Alzheimer's is slowly, but surely, reshaping our world, her reality. The disease is eating away pieces of my mother's mind, leaving a mere shell of the woman she once was. And, it both frightens me and causes great pain.

I miss those wonderful Sunday meals Mom would whip up almost effortlessly. I long for those phone calls and letters that came when I needed them most - when I needed encouragement or a silly message that would make me laugh and keep me going when it seemed like the weight of the world was resting on my shoulders.

Still, there are those times when glimpses of the woman who was returns. I can't predict when it will happen or for how long, but I long for those brief interludes and celebrate them whenever they occur - thanking God for being blessed if for only a minute or two when my mother is more like her old self again.

As I care for her, preparing her meals, helping her get dressed, bathing her, assisting her as she carefully walks with limbs that no longer respond as precisely as they did long ago – and even weathering those storms when she fights that losing battle to control her bodily functions or to remember what she'd been doing just moments earlier – I have a greater appreciation for those who are the caregivers in their families.

I also have come to understand that sometimes even caregivers need someone to care for them too.

Think about the load that so many mothers have carried, often alone, rarely without their efforts being truly appreciated. And they keep going - even when few words of thanks are uttered.

This almost 90-year-old former ball of energy is one of the last elders remaining from the once-sizable tribe of warriors within my family. She has helped her mother, father, sister, brother, two husbands, and two infants who died in childbirth all make their transition back into the hands of the Creator. Who wouldn't be just a little exhausted. Yet, she refuses to lie down softly. She's not ready for that - at least not just yet.

Looking back, I recall those times when I'd go to my mother, overcome by anger, derailed by injustice, racism and prejudice, or just "stuck" because of the consequences I had to endure because of poorly-made decisions.

I wanted to throw my hands up in the air. I wanted to blame everyone but me. I wanted to find a magic wand, a crystal ball or a genie that could perform a miracle. But Mom would simply look me in my eyes, pull me close to her chest and say, "Baby, just tie a knot and hang on."

And so, when Mom doesn't recognize me, that's exactly what I do, I tie a knot and hang on for dear life.

D. Kevin McNeir wrote this article as part of the Journalists in Aging Fellows program organized by The Gerontological Society of America, New America Media and AARP. He is the editor of the Washington Informer newspaper in the nation's capital.