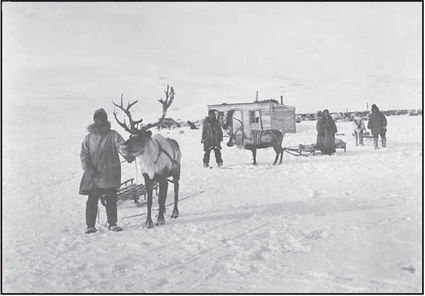 Along with learning to herd reindeer, the Inupiat people also attempted to harness-train the animals.

U.S. Revenue Cutter Service captains saw a need for supplemental food for Alaska's Native people in the Last Frontier during the late 1880s, as whale and seal populations had diminished. And since marine mammals were among the Natives' primary food sources, the captains became concerned for the well being of Natives living in Bering Sea villages.

Capt. Michael A. Healy remembered seeing something in 1881 that might answer the problem of sustaining Alaska's Native people. While serving as second-in-command of the Thomas Corwin as it searched for the lost exploration ship Jeanette along the Siberian Coast, Healy noticed that the Chukchi people were able to sustain themselves by raising reindeer.

As captain of the Revenue Cutter Bear, Healy worked with the Rev. Sheldon Jackson and famous naturalist John Muir to import reindeer to Alaska. At his own expense, Healy brought 16 reindeer from Siberia to the Seward Peninsula in 1891, according to records at the University of Alaska Fairbanks. Then during 1892, he made five more trips to bring a total of 171 reindeer, along with five Siberian herders to train the Alaska Natives to raise and herd the animals.

The humanitarians established the Teller Reindeer station at Port Clarence. But the Siberians and the Alaska Natives clashed over cultural differences, so the herders returned to Russia. Scandinavian herders then came and taught the Alaskans how to herd reindeer.

The U.S. Government became involved in 1896 and appropriated funds to purchase more reindeer from Russia. Small herds then were distributed to mission schools on the Seward Peninsula and around western Alaska.

One of Capt. Healy's interpreters in the Arctic was a young Inupiat woman, Mary Antisarlook, who was fluent in English, Russian and Inupiaq. She later became the first Native woman to own her own herd and became the richest Native woman in the north.

She and her husband, Charlie, lived in a settlement outside of Nome called Sinrock, and they helped the U.S. Government with its reindeer herds for several years. Then the government gave the couple 500 animals – they were the first Natives to be given their own herd.

When Charlie died in 1900 during a measles epidemic, Mary had to fight hard to keep the reindeer. Being woman, her brothers-in-law said she couldn't own property. But after a lengthy legal battle, Mary won her right to keep half the herd.

She sold reindeer meat to all those gold miners who came to Nome in the early 1900s. Mary made a tidy sum selling meat to the miners, army personnel and stores. But her success made her a target. Mary had to fight off many prospectors who wanted a piece of the action. Many offered her money, liquor and marriage to get control of her reindeer business.

Mary successfully dodged these unwanted advances from the male gold-diggers and finally tired of them bugging her all the time. She moved her animals near Unalakleet in 1901 and grew her herd to more than 1,500 animals.

By the late 1930s, there were more than 640,000 reindeer in Alaska. In 1937, the Reindeer Act was passed that restricted ownership to Native Alaskans. Today there are about 20,000 reindeer and 20 herders in Western Alaska and another 10,000 in the Aleutian and Pribilof island areas.

Healy ended his career in Alaska waters in 1904, serving on the famous cutter Thetis. He retired at the mandatory age of 64 and died one year later. For his service to his country, the Alaska Native people and to their way of life, Healy was honored by Congress, the whaling industry, missionary groups and civic organizations on both the Atlantic and Pacific coasts.

The 420-foot U.S. Coast Guard Cutter Healy, the largest cutter and polar icebreaker in the Coast Guard fleet at the time, was named in his honor and put into service in November 1999.