Back to your roots: Travel to reconnect 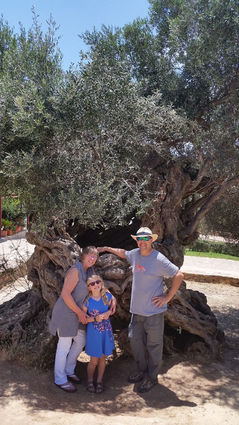 Cindi Lagoudakis, her granddaughter Olivia Heffner and her husband Bill Tremblay at the oldest olive tree in Vouves on the island of Crete. Thought to be over 2,000 years old, it still bears olives.

Note: With national attention on immigration now, this column is focusing on Alaskans visiting the homes of their ancestors. If you have an account of your trip, please contact dimitralavrakas@hotmail.com.

Cindi Lagoudakis, who recently returned from a visit to Greece, is a former acting mayor of Petersburg, Alaska, and a fine artist.

SV: Why and when did your father immigrate to America and where was he and your mother from?

My father came to the United States in 1947 on scholarship to Baldwin Wallace College in Berea, Ohio. He started graduate school in New York where he met and married my mother. I have a photo of him signing the scholarship acceptance papers, with other Greek officials in attendance.

He was from the mountain village of Karines, Rethymno region of Crete. My mother's family is Scots-Irish, with some Welsh, Dutch and Prussian thrown in. The most recent emigrants came in the 1850s and settled in New York.

SV: When you visited his village how were you received?

I first visited Karines with my parents in December 1972, when I was 18. Our reception in the village was very welcoming. It was the first time my grandparents had ever met me, or my mother, and I remember my grandmother making a special chicken dish for us. We stayed at my uncle's home, right above the stable for the donkeys and sheep! They would wake us early every morning, kicking the door in anticipation of being let out to pasture – an effective alarm clock.

There was no running water in the village and families still cooked over a hearth in the corner of the living area. Houses were mostly unheated – even though there was snow on the ground – and we slept under stiff goat hair and sheep's wool blankets. In the mornings, we had a glass of warm milk fresh from the goats and sheep, sweetened with Cretan honey.

Almost no one spoke any English, so we relied on my father to interpret. My parents were invited to several homes for dinner each night, and visited a couple each evening – a challenge because Greek hospitality demands feeding guests 'til they are stuffed.

There was a snowstorm that prevented the taxi from taking us to the airport, so we hiked down the mountain in street shoes to the village below in a foot or two of snow. To help out, my Thea (Aunt) Eleni piled our luggage on a donkey and rode it down the mountain.

I have since been back a number of times: once on my own, once with my daughter just after she had finished working at the 2004 Olympics in Athens, with my fiancé in 2005 for a family wedding, and last year. On this trip, my husband Bill and I brought my 8-year-old old granddaughter Olivia.

We came for a wedding of one of my cousin's daughters, but also visited family in Athens and do a little sightseeing.

SV: You brought your granddaughter Olivia Heffner. What was her reaction to the trip?

Olivia was excited to meet young relatives, and overall very eager about the entire trip. She has read a lot of Greek mythology, and as we toured antiquities and museums, she often reminded me of stories I had long forgotten. Despite her young age, she asked lots of questions, read interpretive signs, and was interested in the places we visited, the sights we saw and the people we met. She even told her grandfather that she wanted to stay.

SV: You attended a family wedding? What was that like? How many guests?

Two nights before the wedding, we had attended the pre-wedding party and dinner in the bride's village. Tables lined the streets of town, and live music could probably have been heard in every house. The wedding meal included lamb prepared several ways, tiropites (triangular phyllo pasteries with either cheese or spinach and cheese), a traditional Greek salad as well as a green salad, rice pilafi, hearty wheat bread, cheese and honey, Greek wine and raki (made by distilling the remains of grapes pressed during winemaking). Dessert was panna cotta (custard).

The party lasted long into the night, with dancing and piles of food, and as is common in the villages, celebratory gunshots in the air – not really legal now, but still happens in rural communities.

The wedding celebration was a pretty amazing event, with at least 1,700 guests. People came and went all evening, with dinner still being served well after midnight, and dessert not until 2 a.m.

In the early evening, the musicians played on stage. Everything was open air, as it usually doesn't rain in Crete during the summer. I asked a family friend about the astronomical cost of hosting that many guests and was assured that families donate lambs for the meal, helping to offset some of the cost of a celebration.

Though some relatives told us they stayed until 7 a.m., we left at the slightly more civilized hour of 2:30 a.m.

SV: Where else did you visit in Greece?

In Crete, we visited Chania, Rethymno, Karines, Spili, Preveli and the ancient Minoan site of Knossos. Balos Beach on the west side of the island had water of beautiful shades of crystal blue and a surprise visit by a goat looking for lunch handouts.

One day we took several families to Lake Kournas to rent paddle boats and discovered large turtles live in the lake and would swim up to our boats.

We went on a wine-tasting tour and visit to an olive oil farm in the Chania area. We started at the Cave of St. John the Hermit, where legend has it he hit a rock with his stick while praying and water sprung up. To this day, no matter how much water is taken, the source doesn't dry up. Many people swear the water has cured various ailments, so we made sure we tasted a little to insure a healthy trip.

While in Chania, Bill and Olivia walked out to the old Venetian lighthouse and an ancient mosque, now a contemporary art space.

Our lodging in Chania was in the Elia Betolo Hotel – a small but comfortable newer hotel in the old town, where cars are not allowed. The staff was very friendly and accommodating, too.

In Rethymno we stayed at the Menta Boutique Hotel, which has a spectacular city view from the rooftop restaurant where breakfast is served each morning. Only a few blocks from Old Town and the park, as well as a local restaurant with pretty tasty fare, we would definitely stay there again.

We also went to Knossos, where parking was free if you promised to eat at the adjoining taverna afterward. We did and weren't disappointed.

Knossos is always impressive, but if you don't get there early the lines can be quite long. 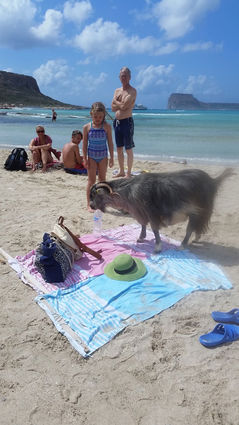 Olivia finds a goat on her towel looking for a meal on Balos Beach on Crete.

We spent four days in Athens visiting family and checking out the Acropolis, the new Acropolis museum, the Evzones (guards) at the tomb of the unknown soldier in Syntagma Square by the Greek Parliament, and wandering through the National Garden. The shady coolness and relative quiet was a nice break from the city bustle just a few steps away.

Our last stop was Mykonos, where we spent four nights at Flora's Houses –with a separate bedroom, laundry facilities, a private balcony and the sweetest hostess ever. Every morning she would bring us Greek coffee, orange juice, and a plate of fresh-baked koulourakia (braided butter cookies).

Each day we chose a different beach to explore. The old city of Gizi at the top of a nearby hill provided a commanding view of the island, and the 1860 lighthouse was worth a visit.

On our last night we enjoyed a meal at Nikolas Fish Taverna on the beach, while wiggling our toes in the sand – a lovely way to celebrate Bill's birthday.