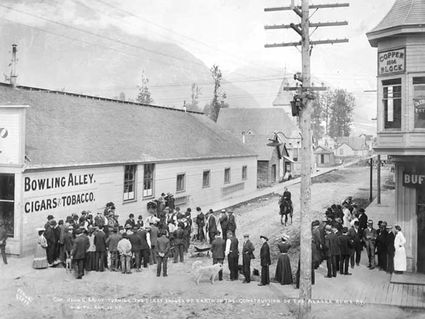 Residents in the new town of Valdez watch as Gov. John G. Brady turns over the first shovel of dirt for the construction of the Alaska Home Railway on Aug. 13, 1907.

After news of gold found in the Klondike spread during the summer of 1897, many people in the Lower 48 left their jobs and families to head north to search for their fortunes. And soon a hoax, perpetuated by promoters looking to profit off of the stampede, would eventually birth one of Alaska's most picturesque little towns.

1897-1898 headlines rang out with "Gold in Alaska. Valdez Trail – Best Trail!" But the reported pre-existing trail turned out to be a glacier that was twice as long and steep as advertised. The intrepid souls that followed the route had to hand-sled more than 1,000 pounds of supplies over the glacier and then build boats to raft the Klutina River Hell's Gate rapids. They also encountered snow slides, snow blindness, glacial crevasses and extreme physical challenges as they hauled their year's worth of supplies.

Those who successfully reached the confluence of the Klutina and Copper rivers in early summer 1898 found a busy little city of rough log cabins and tents. The settlement, called Copper Center, boasted a post office, hotel, store, blacksmith shop and smokehouses. Copper Center became a base from which prospectors ventured out to explore the surrounding country in search of their fortunes.

Some of the stampeders stayed in Port Valdez, named in 1790 by Don Salvador Fidalgo for the celebrated Spanish Admiral Antonio Valdes y Basan who was head of the Spanish Marines and Minister of the Indies at the time. Salvador also named Cordova, Port Gravina and other spots while on his voyage to Alaska to investigate the extent of Russian involvement and to reestablish Spanish claim to the area.

Historically, the territory south of Valdez belongs to the Chugach Eskimo, a maritime hunting people, and to the north the land is of the Ahtna, an Athabascan people of the Copper River Basin. Both the Chugach and Ahtna used the area for fishing and trading copper, jade, hides and furs.

A tent city sprang up at Port Valdez, and as some stampeders stayed on shore to set up shops and businesses, Valdez grew into a supply center. In late summer and fall 1898, U.S. Army Lieutenant W.R. Abercrombie's men then started cutting a rough trail through Keystone Canyon and over Thompson Pass. The following spring, the U.S. Army approved that route as the new military trail to Eagle and built a fort to support the efforts to upgrade the road, as well as establish a telegraph line to the Alaska Interior.

Named for Colonel Emerson H. Liscum, who was killed while leading his regiment at the battle of Tien Tsing in China on July 13, 1900, Fort Liscum was located three miles from the head of Valdez Bay on the south shore. The fort also served to maintain law and order in the growing gold-rush community.

Due to flooding summer streams, the fort was relocated to Ludington's Landing several miles south, on the shores of Port Valdez, one year later. The new site offered a safe anchorage and an abundant supply of water and wood for the 172 men stationed there. The fort closed in 1923.

The Keystone Canyon Trail became the Richardson Highway in 1919 and served as the only viable inland route to Fairbanks until the 1920s. Valdez became the coastal port for the majority of traffic going into and out of the Interior.

Today Valdez, which was relocated four miles away from its original townsite after the 1964 earthquake, is known as the marine terminus for the trans-Alaska oil pipeline – and for being one of the snowiest places in the world with an average snowfall of about 330 inches a year.