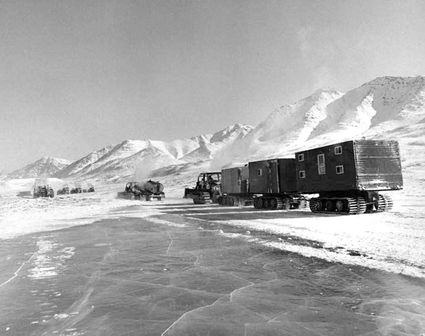 John C. "Tennessee" Miller took a caterpillar caravan from Fairbanks to the North Slope in 1964, which proved the feasibility of ground transportation to the oil industry.

President Richard Nixon signed the Trans-Alaska Pipeline Authorization Act on Nov. 16, 1973, but many people had been working for years to lay the foundation for building that line long before it was approved. Throughout the 1960s, experts believed that the North Slope held commercially viable amounts of oil. And when found, they also knew that getting it to market would be a challenge as there was no road to Alaska's north country.

The only way into the North Slope was by air or sea. The oil industry carved out airstrips and relied on planes like the Lockheed Hercules C-130 to carry people and supplies north. The sea option, however, was only available for a few weeks a year due to sea ice.

But one fellow thought it would be feasible to drive Caterpillar tractors to the North Slope from Fairbanks and thus open up ground transportation. John C. "Tennessee" Miller convinced Richfield Oil Co. to let him try during the winter of 1964.

Miller, founder of Frontier Companies of Alaska Inc., planned to take a caravan of Caterpillar tractors loaded with seismic exploration equipment from Fairbanks north through Anaktuvuk Pass, a low altitude pass that cuts through the Brooks Range from Bettles in the Yukon drainage to the Arctic Slope. He spent two weeks staging supplies needed to establish a second Richfield Oil geophysical crew on the North Slope and then set out on his quest, facing frigid temperatures, frequent equipment breakdowns and dangerous river crossings. It took 40 days to reach his destination – only 18 days were actual travel days, however. The rest were spent repairing equipment, waiting out bad weather and dealing with other hazards.

The Cat trip proved that the pass could be used to link to the Alaska Railroad, which increased the timeframe for shipping items to the North Slope to about seven months per year instead of a few weeks by sea. It also proved the versatility of the D7 Cat. The weight of the D8 was found to be dangerous on river crossings and the D6 too small for pulling sleds, according to Rose Ragsdale, editor of Petroleum News, in a special publication titled "Harnessing a giant: 40 years at Prudhoe Bay."

In anticipation that Congress would authorize the pipeline, and rights of way would be granted, Alyeska Pipeline Service Co. began building a road along Miller's route in 1969-1970.

The primitive road started at the Yukon River – at the end of the 53-mile Elliott Highway from Fairbanks to Livengood – and went about 360 miles north to Prudhoe Bay. Ice roads were built across the Yukon River each winter to keep supplies moving.

After the pipeline act was signed, hundreds of workers moved 34,000 tons of material and machinery into northern Alaska via airplanes and trucks between late-January to mid-April 1974. Five new camps were constructed and seven closed camps were opened. Workers built temporary airstrips on snow and ice, which would be replaced by permanent gravel strips in the spring.

They started officially building the haul road that April. With more than 3,400 workers battling temperatures that dipped to minus-68 degrees Fahrenheit, crews built north and south simultaneously from eight sections until they all connected. Completed on Sept. 29, 1974, it took 154 days to build that road through the wilderness – although the $30 million permanent 2,295-foot bridge across the Yukon River wasn't finished until 1975 – and cost $185 million.

The state renamed the North Slope Haul Road in 1981 for James B. Dalton, a native-born Alaskan and engineer who supervised construction of the Distant Early Warning Line in Alaska during the 1950s. The system of radar stations, which stretched from the Arctic regions of Alaska and Canada to the Faroe Islands, Greenland and Iceland, was set up to detect incoming Soviet bombers during the Cold War era.

Dalton's father, Jack, was an early Alaska pioneer, explorer and adventurer, and established a successful toll road through Southeast Alaska to the gold fields during the Klondike gold rush days.

This column features stories from late Alaska historians Phyllis Downing Carlson and her niece, Laurel Downing Bill. Many of these stories fill the pages of "Aunt Phil's Trunk," a five-book Alaska history series available at bookstores and gift shops throughout Alaska, as well as online at http://www.auntphilstrunk.com.