In the beginning: A visit to Plymouth 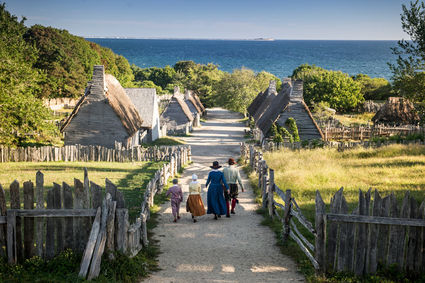 Actors dressed in simple Pilgrim garb stroll down the main street of Plimouth Plantation on Cape Cod in Massachusetts.

Thanksgiving is more than a family feast, it is the story of how we came to be here in this country and how we were helped by the indigenous population.

Plimouth Plantation in Plymouth, Massachusetts, is a time warp kind of place. As you stroll down the main streets lined with thatched homes and crude wood corrals of farm animals, performers in period dress will not break character. You ask about President Trump and they will say, "I know not of this Trump."

This is where the Pilgrims spent their first winter, welcomed by the Wampanoag Tribe of Massachusetts.

On Dec. 16, 1620, 102 Pilgrim souls disembarked off the ship Mayflower after a tortuous 66-day journey from the town of Leiden in The Netherlands.

The Pilgrims were an independent bunch who left England for The Netherlands in search of religious freedom.

Church members included William Bradford and William Brewster. The Pilgrims refused to follow the Church of England's teachings, which they believed was still too tied to the Catholic Church, and wished to worship in a simpler and less ritualistic manner. With that came harassment, fines and jail time.

While the Dutch tolerated their faith and they did find some work, they still found it was hard to make a living and felt their English culture was not sustainable. They also thought the Dutch were perhaps too permissive (a Dutch friend once said they were glad to see them go because they were party-poopers).

In America, they thought they could keep to themselves, embrace religious freedom and make a "better and easier" living.

So they left to sail across the wide, unknown sea to a land where there would be no support and no back up. After several weeks reconnoitering the area, the advance party found what looked to be an abandoned Native village and decided to build there because of the abundant water, a safe harbor, already cleared fields and located on a hill where they had the advantage of seeing anyone who might approach.

That first year, 52 people out of the original 106 survived – many weakened by the trip, cold and lack of shelter, and the settlers stayed on the ship while houses were being built.

In March 1621, after meeting several members of the Pokanoket Wampanoag tribe, they struck a treaty that guaranteed that neither the Pilgrims nor the Natives would harm one another, that if anything was stolen it would be returned and the culprit punished by their own group, no weapons at meetings, and that they would ally in times of war.

Squanto, who had lived in England for a time, came to live with the Pilgrims. That fall, with Squanto's help, they brought in their first corn harvest.

The three-day harvest celebration saw the settlers and 90 Natives feast and play games together. It served as the first Thanksgiving, which in the 1800s started as a traditional commemoration of that first joint celebration.

The Mayflower Compact, the first governing document of Plymouth Colony, was signed onboard by the Mayflower's 41 male passengers on Nov. 11, 1620, while the ship was anchored in Provincetown Harbor within the hook at the northern tip of Cape Cod.

Originally bound for the Colony of Virginia, having been financed by the Company of Merchant Adventurers of London, storms forced them to anchor at the hook of Cape Cod in Massachusetts, and it was considered unwise to continue as provisions were running low.

This inspired some of the non-Puritan passengers (or "Strangers" as the Puritans called them) to proclaim they "would use their own liberty; for none

had power to command them" since they would not be settling in the Virginia territory as originally proposed.

In order to maintain control, the Pilgrims decided to establish their own government, as well as staying allied with the Crown of England. Right from the start it would seem the Mayflower Compact was based on a majority model and the settlers' allegiance to the king. It was a social contract to obey the community's rules and regulations in order to survive and maintain order.

But peace with the local tribes would not last long. In 1637, English settlers (a group of Puritans, not Pilgrims) raided the village of the Pequot tribe, burning alive 700 men, women and children. John Winthrop, governor of the Puritans' Massachusetts Bay Colony, proclaimed a day of thanksgiving to celebrate the colonists who had carried out the massacre.

(While the Pilgrims were Separatists, the Puritans were non-separating Congregationalists who believed the Church of England was the one true church and were loyal to England.) 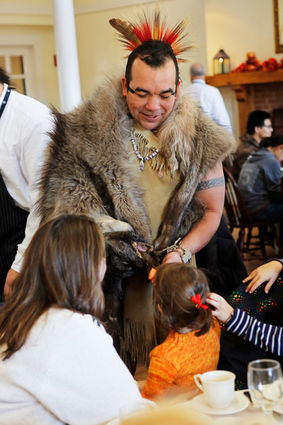 A member of the Wampanoag Tribe in traditional regalia greets young visitors to Plimouth Plantation.

In 1789, George Washington proclaimed a "day of Thanksgiving" to express gratitude for American independence and the successful ratification of the U.S. Constitution.

In 1863, President Abraham Lincoln proclaimed Thanksgiving a national holiday to heal a nation ravaged by the Civil War.

But not everyone celebrates Thanksgiving. In the 1980s, I was the editor of the Boston Indian Council's newspaper "The Circle," and that same Thursday in November is called "The National Day of Mourning" in light of what has happened to American Native peoples since first contact.

Protesters gather at Cole's Hill, overlooking Plymouth Rock, to honor the indigenous people who were massacred by the Puritans and the effect of subsequent waves of European colonists.

We were also given the day off on the anniversary of the Battle of Little Big Horn.