Generators as an Alaskan way of life 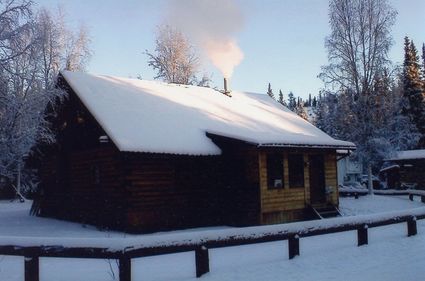 Off the power grid: The McMichaels house in Slana.

In October 1999 my husband Gary and I moved from Palmer to Slana, which was at that time one of the few places left on Alaska's road system still without commercial power. Residents ran their own generator, or did without electricity.

This was not a completely new situation for us. Twenty-five years prior, while living on Chena Hot Springs Road out of Fairbanks, we learned it would take $10,000 to bring power to our property. After living there for a year and half, we moved to California. For eight months of our two and a half years in California, we lived in a "homestead" type situation with no electricity and a newborn. Because of some of those past experiences, I insisted we have basic conveniences before agreeing to move to Slana. Generator power made all the difference.

My biggest concern was living without a freezer. I didn't see how I could cook a decent meal without one, living that far away from grocery stores. At first we didn't realize we'd have enough power to run the freezer, but soon learned otherwise. Since the freezer was located in an outdoor storehouse, it didn't need much help from the generator in the winter and it held its temperature just fine in the summer even with the generator shut off at night. Although, if we were gone more than three days in the summer, we had to ask a neighbor to come start the generator and let it run for a few hours. Also, summer or winter, when we were gone more than one day, we emptied the refrigerator and put the contents down in the cellar.

More than once when we accidently plugged in too many things, the generator couldn't pull the load and immediately shut down. Usually, we succeeded at this delicate balancing act.

We knew from experience to balance the load ― we kept some lights on at all times as well as a few other basics. But in winter, using my hair dryer or the microwave while the truck engine block heater was plugged would cause a shut down. In the summer, when we had both the coffee maker and the pancake griddle turned on for our bed and breakfast guests, adding the unexpected use of a hair dryer would also trigger a shutdown.

When we first moved there, I quickly learned that turning the refrigerator off would give me that little extra power I needed for a few moments, rather than going around the house turning off all the lights. After a few times of forgetting to turn it back on for hours, I developed a signal system. When I turned the fridge off, I put a red scarf through the door handle. That way, if Gary passed through, and saw the scarf, he knew I'd forgotten to turn it back on. That system was not fool proof, but it certainly helped.

I knew the first week we lived there that the noisy hum of the generator was not going to be a problem for me as others said it was for them. In fact, we could hardly hear it inside our log home unless the windows were open. The hum was reassuring to me, because it meant that all was well and that life could continue as usual. We grew so accustomed to the sound that whenever there was a fluctuation for whatever reason, we were both ready to drop what we were doing and investigate.

Our first two years, we used the existing 3 kilowatt Lister diesel with a 3.5 KW Honda gasoline as a backup. Then we bought a 5.5 KW Northern Lights Lugger diesel and used the Lister for back up. I could start either the Lister or the Lugger in the morning and shut them down for the night, check the oil, add oil, and change oil. But I must admit Gary did most all of that work. Since he's the morning person, he usually walked out and started the generator each morning while I did the night time shut-off duty.

I only had to deal with problems twice in all the six years we ran generators. These incidents happened while Gary was gone, of course, and each time a different neighbor came to the rescue.

One problem was of my own making. While Gary was out-of-state taking care of family business, I had to change the oil. I succeeded in following the numerous steps required to complete the process, but forgot only one ― to replace the cap on the oil filler.

By the time it automatically shut down because of low oil, all the fresh oil I had just put in was dripping off the walls and ceiling of the generator shed. After spending hours cleaning up the mess, I called a neighbor (who also happened to be the local generator expert) to check things out before I restarted it. Gary was none the wiser, until I eventually told him.

Besides the basic daily maintenance of running a generator, every once in a while we had to scramble to get a custom part out of Anchorage. Our generator was connected to a 500-gallon fuel tank just outside the generator shed and we had a standing "keep full" order with the fuel oil service company out of Glennallen.

In the spring of 2000 there was a big community meeting with Alaska Power & Telephone out of Tok. If all went well, the Slana area was supposed to have commercial power by the fall of 2002. I couldn't understand why the long-time residents didn't get more excited at the prospect of commercial power. It turned out they had heard that song and dance before and weren't going to hold their breath. Also, there were those who didn't want to see commercial power come to the area, just as there were those who didn't vote for Alaska statehood. It would bring unwanted changes to a way of life. 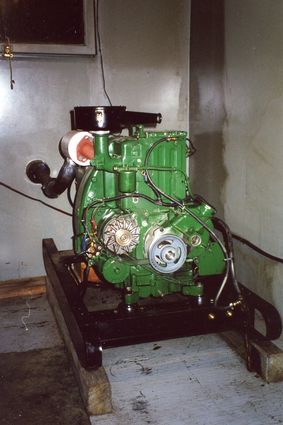 As for me, I adjusted well to life with generator power and as long as that generator kept humming, I was perfectly content. But, a big change finally came in the spring of 2005 when AP&T brought in a large generator and installed it on the local school grounds. View-detracting power poles were placed and lines strung on a portion of both the Nabesna Road and the Tok Cut-Off. In the beginning, only people within a one mile radius were hooked up, but gradually more customers were brought on-line.

New adjustments took place. Our Lugger became the backup and there were no more twice daily trips to the generator shed with flashlight in hand. We became accustomed to the sound of silence and the arrival of the monthly power bill in the mail.