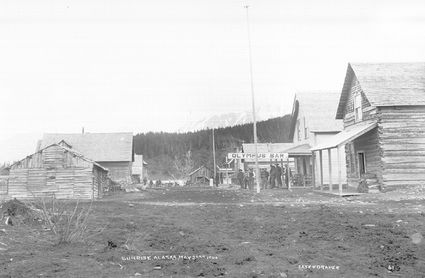 The little town of Sunrise, seen here in 1906, was about six miles south of present-day Hope and sported a couple thousand residents during the Cook Inlet gold rush era in the mid- to late-1890s.

Russians knew there were gold deposits in Alaska, as they had sent a mining engineer to search the land after the gold discovery in the late 1840s in California. The engineer found colors all around the mouth of the Kenai River, but his discoveries must not have meant much to his superiors, because they pulled him off gold duty in 1852 and told him to look for coal instead.

And the Russians didn't broadcast the fact that they had found gold, either, because they feared a rush of gold-seeking Americans, Brits and others into its colony. That fear became reality about a decade after Alaska became part of the United States.

A prospector named Alexander King arrived at Kenai and convinced a trading post owner to grubstake him for two summers and a winter around 1888. A grubstake usually consisted of enough food and supplies to keep a man for one season and was valued at around $500 (more than $13,500 in 2018 dollars).

After loading his supplies into his old dory, King jumped in his boat and rowed up Turnagain Arm. No prospector had rowed up that way previously, because it appeared near impossible to navigate the waters due to the fast tides, according to noted Cook Inlet historian Mary Barry. And gas engines weren't around at that time.

Late into the second summer, King showed up in Kenai with four pokes of gold. He paid off the trading post owner for his grubstake and resumed his search of the mother lode.

Word of King's discovery, as well as gold found on Mills Creek and Sixmile Creek near Girdwood, got out and soon a few thousand prospectors made their way north. By 1896, the gold rush to Cook Inlet was in full swing.

Mining was simple. The liberal use of a pick and shovel, as well as a strong back, was all that most men needed. Miners shoveled gravel from gold-bearing streams into long, narrow, wooden boxes called sluices. They then ran water over the gravel and slats, which were laid crosswise in the bottom of the boxes, caught the gold and the gravel waste – called tailings – washed through.

It didn't take long for settlements like Girdwood, Hope and Sunrise to blossom in the wilderness. These little towns sported several stores, a brewery, saloons and restaurants and served as supply and entertainment centers for miners along Resurrection Creek and Turnagain Arm.

Girdwood, named for Col. James Girdwood, who staked the first four gold claims along Crow Creek in 1896, originally was called Glacier City. Of course, it now is known for its laid-back lifestyle and terrific winter activities at Alyeska.

Austin E. Lathrop, better known as "Cap" Lathrop, had a hand in getting the miners to leave Cook Inlet. As he piloted his schooner, the L.J. Perry, around the area he spread the word that great quantities of gold had been found in the Klondike. Many miners quit working their claims and headed farther north.

What happened to King, the man who started the Cook Inlet Rush? He left Kenai Peninsula and headed to the Yukon River in the summer of 1900. While working on a river freighter for a man named Herbert Davenport, King got upset after the scow kept getting grounded on sandbars. In a rage after one more grounding, King shot Davenport in the heart. Shipmates – fearing for their own lives – agreed to tell authorities that the shooting was an accident and convinced King to keep the body on board the boat so the death would not look suspicious. But when they pulled into Dawson, the crew told the truth about the event and King was hung by the Royal Canadian Mounted Police on Oct. 2, 1900.