Look up in the air – what bird is that? 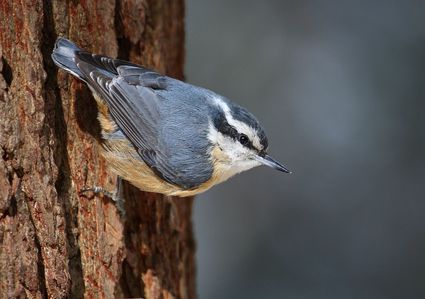 The red-breasted nuthatch. Perhaps you can spot one this winter?

Do you know what the second-fasted growing hobby in the USA is? Bird watching. Even if you aren't a bird watcher, it's hard to ignore the impact these sometimes tiny creatures have on our earth. Her in Alaska, bird watching is reaching every part of our society, from the very young (my grandson loves to go bird watching with me), to the older folks, from those who are new to this fun hobby, to those that have been bird watchers their whole lives, and from those than can recognize a chickadee call (they actually call sound similar to their name). Some birders are also photographers, but many birders just enjoy watching and identifying them and a photo is not necessary. I love to do both.

The bird I'm going to write about in this article is one of our year-round residents here in Alaska, and one you have probably seen over and over again. Although the red-breasted nuthatch is small in size, it has a huge voice that carries throughout the woods, loudly announcing its presence. These sassy little birds flit from tree to tree, grabbing food such as insects and seeds and hiding it in a secret location to return to later to eat. Their song is a monotonous series of clear, nasal, rising calls.

The red-breasted nuthatch is a small songbird. The adult has blue-grey upper parts with cinnamon underparts, a white throat and face with a black stripe through the eyes, a straight gray bill and a black crown. The cap on the male is black, females gray, and a slightly lighter rufous color on the undersides. The white markings on either side of the short tail can be seen in flight on both sexes.

Like other nuthatches, the red-breasted nuthatches use their strong legs and claws to walk up, down and sideways on tree trunks, probing in the bark crevices for food. Insects and spiders are their main foods in the summer. During winter, they eat many insects that they pry from food caches in bark crevices but they also eat many seeds. In developed areas, they have learned to eat suet and peanut butter mixes as well. My neighborhood nuthatches love to fly to my balcony rail to grab the peanuts I leave for them. And if the nuts are all gone, they will sit on the rail and cry out for more.

These little birds form monogamous pairs. They usually excavate their own cavities in a rotten snag, often aspen, and require fairly soft wood to excavate. They will occasionally use a natural cavity, an old woodpecker hole or artificial nest. Both members of the pair create the nest hole and the female builds the nest inside.

The nest is a soft cup of grass, needles, bark fibers, moss, feathers and hair. Both sexes coat the inside and outside of the nest hole entrance with pitch that may help keep predators and competitors away. They sometimes use a piece of bark to transport the pitch to the nest and then smear it on the entrance hole.

The female incubates five to eight eggs for twelve to thirteen days. Both parents feed the young for 18 to 21 days on the nest and for about two more weeks after they fledge.

Next time you are out for a walk, listen and watch for our year-round little bird, the red-breasted nuthatch. They will surely put a smile on your face with their antics and chatty call.