Hunting with Dad: Moose and memories 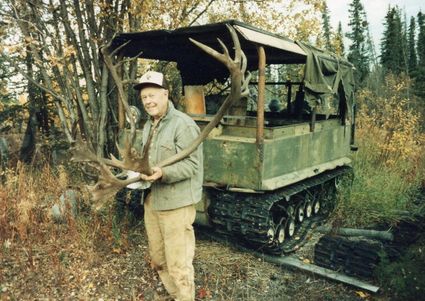 Al Clayton, Sr., with caribou antlers and the weasel vehicle, many years after the 1968 hunt.

My daughter and I were visiting Dad and Mom in Homer one weekend in early January 20 years ago when I was startled awake by the phone. The clock showed it was almost midnight when I picked up the line. It was the Alaska State Troopers.

"Is this the home of Al Clayton, and is he interested in a moose roadkill?" the voice on the other end asked.

After Dad got on the phone, I listened to see how he would respond. With the accident site only a quarter-mile from his house, how could he say no. I was not enthusiastic, but if Dad, age 83, said yes, I was right behind him. Asked if she wanted to go, my 19-year-old daughter groggily replied, "no way."

It took a while to gather what we thought necessary. When we arrived, the trooper said the moose stumbled off with a broken leg.

"I shot her. Just follow the tracks," he said, pointing over the bank and into the woods.

We followed the trail through two-foot deep soft snow for about 75 yards until we found the yearling dead under a tree. We went back home for snowshoes and then prepared to work. It was around zero, cold for Homer. I held the flashlight as Dad gutted the moose, but found my mind wandering back to our first hunting trip together.

Dad had been a big game guide for as long as I could remember and was always gone from home at least a month every fall. But in 1968, he took the whole family hunting. I was the oldest of four children, almost 13, and that hunt was to be my special time with him.

Dad drove the old International flatbed truck loaded with the "weasel", while Mom drove the family Checker station wagon. From Glennallen, we traveled to a pull-off near Mile 14 of the Nabesna Road where Dad off-loaded the weasel, a large track vehicle he purchased as Army surplus in the mid-1950s.

These amphibious vehicles were widely used during the early 1940s to travel over soft ground. The Studebaker engine that came with the weasel was ruined when he acquired it, so Dad replaced it with a 1928 four-cylinder Chevrolet engine.

He welded a metal bedpost frame to the front, middle and back, which supported a 4 x 8 foot sheet of plywood. A tarp was tied over the top for rain protection. The side of the weasel stood about 3.5 feet off the ground. To get in, we stepped up onto the top of the track, then put another foot onto the foot hold higher up, and then swung up and over the side, holding on all the while.

We all helped load it with everything our family of six would need for a week. After the food, cooking equipment, berry buckets, sleeping bags, tent, the family beagle and other gear was finally stashed, we all piled in and there was still room left over. We set off, eventually making camp 12 miles out toward the Mentasta mountains in the Suslota area.

Each day Dad and I would take off walking to look for moose. We didn't see much. A couple of days when it rained real hard, we stayed in camp. Some nights we could hear little streams of water running under the tent. Once we moved the tent to a drier location.

One day we spotted a moose, but before we could get close enough, it spooked and ran off. That afternoon we came across a large caribou. Since it didn't look like we were going to get a moose, Dad decided to take the caribou.

After he gutted it, we started the long walk back to camp. I hadn't kept any landmarks in mind and as we walked back all the country looked similar to me. First it was twilight, and then moonlight and I wondered if we were lost, but of course not, with Dad as guide.

Back in camp there was excitement when we returned. During the day, a moose had walked right through camp, causing great commotion. My little six-year-old brother was so disgusted that Mom didn't shoot it. She said she couldn't get it lined up in the rifle sights because of her glasses and because the moose was so close.

The day after we got the caribou, we broke camp, retrieved the meat, and headed home. The heavy rains during the week made the last creek we had to cross impassable. By the time we arrived, it was dark and still pouring rain. The station wagon was just on the other side of the creek and Dad didn't want to set up the tent. Instead he felled a cottonwood tree 14 inches in diameter and tied a rope from one side to the other for a handrail. Then he helped everyone cross one at a time, taking the most care with my youngest sister, who was wide eyed and petrified of falling into the rushing water, which was running swift and probably four feet deep.

We drove home to Glennallen and the next day returned to retrieve the weasel, gallons of blueberries and the caribou meat. Dad ferried the meat across the creek with a small skiff. Then he drove the weasel way down and around to an easier place to cross.

"I'm done here for tonight," Dad said, snapping me back to the present. "Let's gather up the tools and go home. We'll get a few hours of sleep and then in the morning, finish cutting it up and pack it out in the daylight." 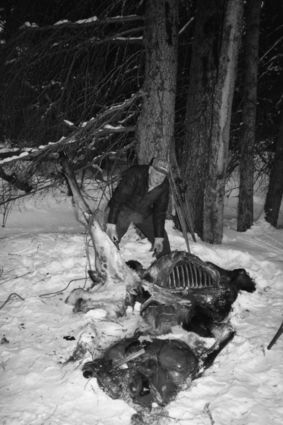 The next morning, I drove into town to see Mom at the care home where she lived and tell her why Dad was late for his usual visit.

In the meantime, my fully rested daughter proved to be a good helper to her Grandpa. He cut up quarters and tied on rope. Then, on snowshoes, she dragged them out over the hardened trail to the ravine directly below where the truck was parked. By the time she came back, he had another load ready. To get the chunks of meat up the last four-foot bank, Dad tied them onto the front bumper and backed the truck up.

A day later when Dad was asked at the senior center dining room what he had been up to, he smiled and described his recent adventure.

"It was the most fun I've had in quite a while," he said.