Willoughby and the Silent City hoax 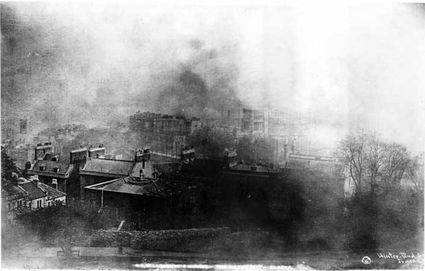 Alaska prospector Richard "Dick" Willoughby claimed he snapped this photo while looking out over Muir Glacier in Southeast Alaska on June 21, 1888.

One man who arrived in Southeast Alaska's new gold-rush settlement of Harrisburg, later named Juneau, in 1880 created a sensation by claiming he had seen a city appear above a glacier. But people who knew him said, "He was the kind of person to gaze into a raincloud and see the sun."

Richard "Dick" Willoughby landed in Harrisburg from Missouri shortly after Auk chief Kowee led Joe Juneau and Richard Harris to Silver Bow Basin, which started Alaska's first big gold rush. Many historians claim the middle-age man was prone to telling tall tales and reveled in sharing his stories with anyone who would listen.

An article written by David Starr Jordan that appeared in the June 1897 issue of Popular Science recounted one of his biggest whoppers. The "Professor," as some people called him, shared a story with some friends in midsummer 1888 that was so incredible they thought it just had to be true.

Willoughby told them that he was enjoying summer solstice on Muir Glacier in Southeast Alaska's Glacier Bay when all of a sudden he saw a hazy image of a city floating above the ice. The man for whom Willoughby Avenue in Juneau is named claimed he saw elm trees, brick houses, a tower with scaffolding around it and a river flowing in the image he called the Silent City. Willoughby told his friends that he had seen this city before, always in late June, but this time he had proof – he showed them the negative of a photograph he claimed he had taken of the amazing city.

Soon people far and wide were buying copies of his photo for 75 cents each, about $21 in today's money. Jordan, who had purchased one of these photographs in Sitka in 1896, reported that Willoughby had written on the back of the photo that he was the first American to find gold in Alaska's icy peaks and "tearing from the glacier's chilly bosom the 'mirages' of cities from distant climes."

As the summer of 1889 approached, Willoughby enlisted friend Minor W. Bruce, Alaska correspondent for the Omaha Bee, to help enhance the story of the Silent City by setting out on an expedition to Muir Glacier to capture another photograph.

Several weeks passed with no word from the men until one of their party showed up on the steamer George W Elder with a haunting story.

He said Bruce had disappeared after walking into a fog that hung over the glacier. They only found his camera near a large crevasse.

A month later Bruce, Willoughby and the rest of the expedition arrived back in Juneau safe and sound, with Bruce claiming he had been lost on the glacier for three days and had seen the Silent City. Of course, he had no proof as his camera had been left by that crevasse when he got lost.

While Bruce, who had a reputation for stretching the truth in his reporting, could not prove that he saw the Silent City, sales of Willoughby's year-old photograph soared.

It later was learned that while on Vancouver Island in 1887, Willoughby had purchased a box of negatives from a tourist from Bristol, England, according to Thomas Arthur Rickard's 1909 book, Through the Yukon and Alaska. Among the photos was an over-exposed shot of Bristol.

Rickard wrote that a Stanford University professor who had lived in Bristol is credited with revealing the truth of Willoughby's Silent City hoax. Professor William H. Hudson recognized the picture, which he thought to be about 20 years old, right down to the scaffolding around the tower.

Willoughby continued to share tall tales with friends and tourists alike until his death in Seattle in May 1902.