Finding a home for all of those cookbooks 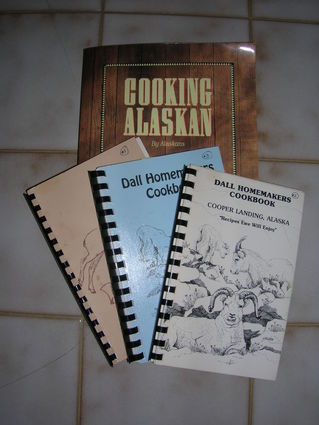 Four of the Alaska cookbooks in the author's collection.

"Did all these cookbooks come from one collection?" I inquired of the lady behind the desk. Several rolling carts filled with books spilled out of the small room labeled "Friends of the Library Used Book Sale". I was visiting the community college library in Fort Collins, Colorado, where my daughter lives.

"Yes," the clerk replied. She explained that a woman had died and her husband had donated her cookbook collection to the library...twenty-three boxes worth. I had already browsed enough to learn the owner's name and see personal handwritten notes and recipes tucked in the pages. Although several cookbooks were "calling" to me and priced at only $1, $2, and $3, I purchased not one. The thought of packing my suitcases to fly home to Alaska was the deterring factor.

Growing up in Glennallen, the one cookbook in my mother's kitchen was her red and white checked 1953 "Better Homes and Gardens New Cookbook". I rarely saw her consult it. Mom had grown up in a Methodist Children's Home and had not learned how to cook until she married Dad several years later. Moose roast or steaks, boiled potatoes and canned vegetables was the usual supper. I was introduced to other more "exotic" fare such as pizza, lasagna, spaghetti, sloppy joes, etc., through the hot lunch program at Glennallen School.

When I married my husband, Gary, he already had a collection of six or eight cookbooks and we received more as wedding gifts. At one of my wedding showers, the community ladies each presented me with a 3x5 card of their favorite recipe. The first few months of marriage, I enthusiastically tried numerous recipes with a different menu every night.

Six years later while living in Cooper Landing, I was invited to participate in the Dall Homemakers Club community cookbook, which sparked my interest in small regional cookbooks. A few years later in Palmer, several of my recipes were included in the Lazy Mountain Bible Church cookbook.

On a family trip to visit relatives in Texas, I was introduced to the cookbook collections resulting from the Southern Living Magazine. Mail order offers opened my eyes to a variety of other cookbooks. At this point, money was not as tight, and I succumbed to purchasing a new cookbook once in a while.

After a couple of years, though, I realized I had more than needed and said, "Enough!" But, by this time, family members had started contributing to my collection. Knowing that we eat a lot of Mexican food, my dad even personally picked out a Mexican cookbook for me.

Recipes were also collected through newspapers, magazines and friends. Early on, I followed my mother-in-law's example and organized a shoebox with divider cards for the various categories. Now with two shoeboxes, several three-ring binders and four shelves of cookbooks, it is sometimes hard to locate a particular recipe.

Having been taught at an early age not to write in, or otherwise deface books, it was a major milestone when in 1998 I decided to start making notes in my cookbooks each time a new recipe was tried. The usual notes include the date and whether we thought it was delicious, okay, or don't try again.

Five years after our son left home, I received a call from him requesting a few specific recipes, which he remembered from his growing up years. It pleased me to compile and make copies for a personal cookbook for his use. Since our daughter became a vegetarian, I received no such request from her. Now both of them cook a much more creative and wider variety of foods than I ever did or hope to. Sitting down to a meal at either of their tables is a delightful, although rare, treat.

My collection still occasionally grows when I just can't pass up a special volume at a yard sale. Most recently, a good friend here in Palmer downsized her collection and I became the happy recipient of her copy of "Cooking Alaskan".

After my experience at the community college library in Fort Collins, I called my daughter and said, "Erin, I would like you to give my cookbooks to any interested family members after I no longer need them. The rest can be donated to a library, but first please flip through the book pages and remove any loose note papers."