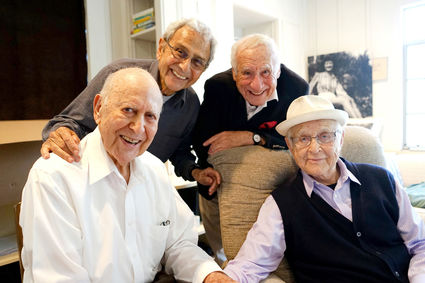 Carl Reiner, front left, with George Shapiro, Mel Brooks, and Norman Lear who appear in "If You're Not in the Obit, Eat Breakfast."

Turning 97 in March, Carl Reiner shows no sign of slowing down. "I wake up with ideas!" the veteran actor, writer, director and producer said from Los Angeles.

One of those ideas was to colorize episodes of his crown television jewel, "The Dick Van Dyke Show." Two color episodes were produced in 2017 and last year Reiner selected a couple more favorites, with plots loosely based on his family's experience, which aired on CBS over the holiday season.

"I've done a lot in my life but have to say that show is what I'm most proud of," said Reiner. "We couldn't afford to shoot it originally in color and make a profit, but I'm so pleased with the colorized episodes – they look fantastic."

In "Where Did I Come From?" young Richie (Larry Matthews) questions his parents about his birth, much like Reiner's own children did, while in "Never Bathe on Saturday" Laura (Mary Tyler Moore) gets stuck in a hotel bathtub, ruining a vacation for hubby Rob (Dick Van Dyke).

"I wrote that based on the time my wife and I were away, and she noticed the faucet dripping while taking a bath and wanted to get a plumber," Reiner recalled.

Reiner says it was important to produce colorized versions close to the originals.

"Luckily some enterprising photographers were on hand during the original filming and took color photos of the set and actors," he noted. "So some colors are very accurate, like the rooms. Colorization has come a long way and I wish we could do all 158 episodes, but it's very expensive."

Reiner's 2017 HBO documentary, "If You're Not in the Obit, Eat Breakfast," was also recently released on DVD in which he narrates a series of interviews with active nonagenarians.

"In my opening section, I'm reading the newspaper obituary section and remark if I'm not in it, I'll have breakfast," he said. "They thought that would make a good title."

But of all the people Reiner has known, he has the highest praise for his late wife Estelle, to whom he was married for 65 years. 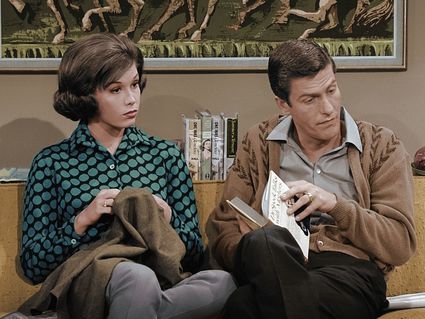 Colorized scene from The Dick Van Dyke Show episode "Where Did I Come From."

"While you do live in your memories as you get older and especially after losing a spouse, if you've had a good marriage it sustains you," he said. "She was perhaps the most extraordinary woman I ever met and could do everything better than anyone else. I think about her every night I go to bed, so she's still alive in me, no question."

A prominent comedy writer throughout his career, Reiner also continues to work on new book projects this year.

"If you have something to do every day, you'll hang around," he said.