Memories of the 1964 Earthquake 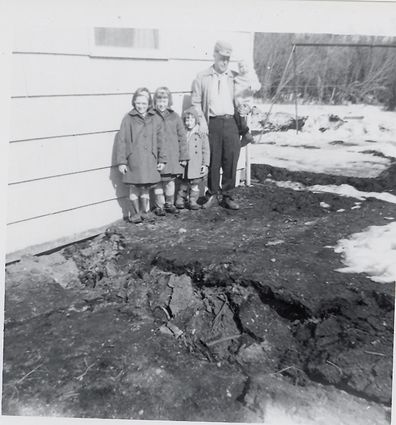 Maraley, Jeanette, Shirley and Alfred with their father Al Clayton near the crack that ran lengthwise under Copper Valley Electric housing after the 1964 earthquake.

While reading in my bedroom late in the afternoon of March 27, 1964, I suddenly felt the room swirl. I had enjoyed the day off from third-grade school work since it was Good Friday. Our family lived in company housing next to the Copper Valley Electric power plant in Glennallen. As the movement got stronger after a few seconds, I started to go look for my mother.

By this time, the very loud firehouse-type bell alarm that signaled Dad when something was wrong at the power plant came to life, broadcasted its noise from the wall next to the phone in the hallway. Mom had gathered my two younger sisters and two-year-old brother and they were all sitting in the hallway on the floor. She hollered for me to join them, but every time I tried to move toward my bedroom doorway, the piano rolled toward me as if it was going to run me over. After a couple of attempts, I finally made it out to them.

The alarm clanged so loudly that Mom had to yell to be heard. First she prayed at the top of her voice and then she had us recite Psalm 23 with her. Thick dust clouded the air. The noise of things falling and glass breaking mixed together with Mom's prayers and the alarm. At eight years old I was terrified, but didn't realize we were experiencing an earthquake. There seemed to be no end - almost five long minutes of swirling, jolting, noise and confusion.

Finally, the movement stopped, but it took a while for someone from the power plant to disconnect the alarm. Although noisy, the hallway had certainly been a safe choice for protection from flying debris. Of course there was no electricity and daylight soon disappeared.

Mom had us all sit on the couch while she checked things out and started the process of cleaning up. She began with the kitchen first because it was almost dinnertime. Heaped on the floor was a big pile of broken dishes from the cupboards, broken bottles of food from the refrigerator, and various other things that came off the walls and out of the cupboards and refrigerator.

Only three plates of Mom's good wedding dishes survived, and that was because they landed in soft places like a drawer filled with towels, which had slid open. The bathroom door was blocked and couldn't be opened because all the medicines and linens were heaped in a big pile on the floor. Everything had fallen from the open shelves, which were just inside the doorway.

I don't remember the cleanup part. I'm sure we kids just stayed on the couch out of the way while Mom did that. At one point, when the men at the power plant tried to get the electricity back on line, the alarm sounded again. Immediately, we kids ran to the hallway thinking the earthquake had returned.

Investigation turned up a crack under the house which ran lengthwise directly under the hallway where we'd been sitting. This crack most likely opened and closed more than once during the quake and probably contributed to the dust. Workmen came within the week and repaired the house foundation, fixed all the cracks, and repainted the walls.

It took months for Mom's nerves to recuperate. As for myself, having now experienced the 1964 quake, the 2002 Denali Fault 7.9 quake, and most recently the Nov. 30 quake, I can't help but go on the defensive every time I feel just the slight stirrings of earth movement.

But, back to 1964. Dad experienced his own adventure. Immediately after getting off work at the power plant at 3 p.m. March 27, he had left for a weekend ice fishing trip to Crosswind Lake with Markle Ewan, Jr. They had taken Dad's snowplane (a homemade, land going machine with three skis and an airplane engine) out on to the lake and Dad had almost finished chopping out a hole with his ice chisel when the earthquake began. He was already down four to five feet, just ready to reach water when it seemed that he struck the back of a giant fish monster. The whole lake started heaving, buckling and cracking.

When the movement first started, Markle ran for shore, but Dad thought he would just ride it out on the skis of the snowplane. He had been in other earthquakes before, but as it turned out, none like this. From where he stood, it looked like the trees on the shore were bending down to one side and trying to touch the ground only to spring back up and then bend over and try to touch the ground on the opposite side. 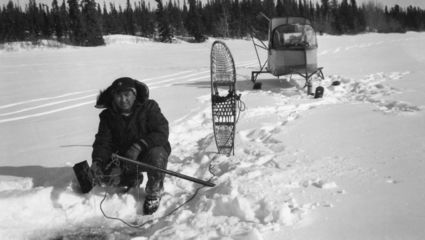 A coyote decided it would be better off on the lake rather than on shore. Dad watched it run out of the woods and then try to maneuver its way in bewilderment over the cracking ice. Water sprayed up through the cracks and then came down like rain.

When the quake was finally over, the two men settled down for an evening of fishing for lake trout. They spent the night at an old Indian cabin at the north end of the lake. Dad didn't realize how bad things were back at the power plant and at home. Copper Valley Electric hired bush pilot Jack Wilson to fly out the next morning and get a message to him. Jack was good at that sort of thing. A wet glove landed on the trail by the cabin. Inside the glove on a piece of paper was the message: Come Home!