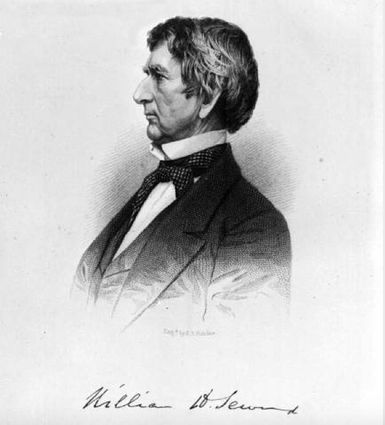 After U.S. Secretary of State William H. Seward left office he traveled to Alaska in 1869 to see for himself what the Great Land had to offer.

In July 1869, the steamer Active arrived in Sitka with former Secretary of State William H. Seward and his entourage on board. He had negotiated the purchase of Alaska from the Russians for a mere $7.2 million in March 1867 and now wanted to see the magnificent land for himself.

U.S. Gen. Davis held events in his honor, and then Seward traveled to Lynn Canal where villagers at Klukwan gave him the honor of calling him "The Great Tyee" (chief). Seward was impressed with the ceremonial art he saw and presented Chief Klokutch a blanket woven in special emblems of the United States. Historians say it remained one of the chief's most prized possessions until his death.

Seward still was looking into the future when in a speech at Sitka he said: "The political society to be constituted here, first as a territory, and ultimately as a state or many states, will prove a worth constituency of the Republic."

He had had a tough time convincing the "powers that be" several years earlier, however, that Alaska should become part of the United States. When Seward tried to educate his countrymen to the value of Alaska, he reminded them of the unfavorable comments that had been heaped upon President Jefferson at the time of the purchase of the "desert waste of Louisiana" and "snake-infested Florida."

Seward never faltered in his faith in the value of Alaska, however. It's even reported that when he'd retired to the quiet of his home in Auburn, New York, a fellow townsman asked him what he considered his greatest achievement as Secretary of State.

"The purchase of Alaska," Seward is alleged to have replied. "But it will take the country a generation to appreciate it."

By purchasing Alaska, Seward enabled America to become a Pacific as well as an Atlantic power. But one episode in his life may have altered the path of the Last Frontier. He was almost assassinated the same night John Wilkes Booth murdered President Abraham Lincoln.

Booth was part of a Confederate plan to murder not only Lincoln, but also Vice President Andrew Johnson and Seward. They thought the process of electing a new president would throw the Union into a state of "electoral chaos" if Seward were dead, too, since only the Secretary of State could set in motion the means for an election.

Booth assigned a young Confederate "spy," who went by the name of Lewis Paine, to carry out the deed. Paine made it into Seward's home the evening of April 14, 1865. He raced up to the third floor and burst into Seward's bedroom, where the 63-year-old was laying in bed recovering from a carriage accident that had happened the day before.

Paine pulled out his Bowie knife, after his revolver jammed, and stabbed Seward multiple times in the head. Although seriously injured in the attack, Seward's life may have been saved by the leather-covered iron brace around his neck and jaw. He was maimed in the assault, though, which is why he often sat in profile for pictures taken of him after that time.

Thank goodness Seward survived the vicious attack. If he had died, it is possible that Russians would have continued to call Alaska their own since Seward was about the only person who thought Alaska was valuable.