"As seen on the silver screen" tours 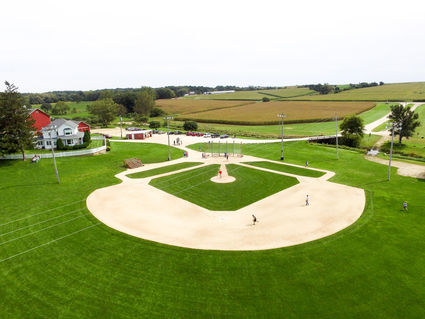 Fans of the movie "Field of Dreams" continue to show up to tour the farm house and regulation sized baseball diamond in a middle of a cornfield in Dyersville, Iowa.

Bob Burrus is channeling John Travolta. He enters Lenny's Pizza in Brooklyn and orders a slice. After devouring the snack, he emerges onto 86th Street and struts down several blocks as the song "Staying Alive" plays in his head.

Bob is reliving the opening scene of the 1977 motion picture Saturday Night Fever. And he's not alone. As he mimics one of his favorite movie sequences, others around the country are fantasizing theirs.

From Maine to Hawaii, locations where movie scenes were filmed attract visitors seeking to hold onto memories of beloved motion pictures. At places ranging from a delicatessen in New York to a beach in Hawaii, from a state reformatory in Ohio to an island off the coast of South Carolina, people recapture treasured moments.

Folks in the know stop by Katz's Delicatessen in New York City and plop down at a table marked by a sign which identifies it as a prop from the movie When Harry Met Sally. That's where Meg Ryan acted out the famous fake orgasm scene which prompted an elderly woman seated nearby, played by Director Rob Reiner's mother, to tell the waitperson, "I'll have what she's having."

Some visitors to Maine are on a quest to relive scenes from movies based on books by Stephen King. That master of horror has lived in the state for much of his life and places in Bangor and elsewhere play roles in his novels.

The Thomas Hill Standpipe, a water tower built in Bangor in 1897, shows up in IT when the bodies of drowning victims are found inside. The Mount Hope Cemetery is the setting for scenes from Pet Sematary.

worth a look-see. It dates back to 1858 and is surrounded by a fence decorated with bats and gargoyles. A good way to take in these and other places associated with the author and his books is to join a tour group led by Stuart Tinker, a recognized expert in all things Stephen King. (sk-tours.com, 207-947-7193).

As long as you're in Maine, you might wish to check out other film locations. Sand Beach on Mt. Desert Island was the site of a picnic in The Cider House Rules. The Marshall Point Lighthouse near Point Clyde is where Forrest Gump ended his run across the country from California's Pacific coastline to "another ocean." More about him later.

Not surprisingly Hawaii also has a number of motion picture claims to fame. In what may be the most legendary beach scene of all time, Burt Lancaster and Deborah Kerr engaged in a passionate kiss on the shore of Halona Cave in From Here to Eternity.

A very different scene occurs in the original version of Planet of the Apes (1968) which starred a craggy looking Charlton Heston. The movie comes to an end on a magnificent strip of sand located between Zuma Beach and Point Dune in Malibu.

Most of The Shawshank Redemption was shot in and around Mansfield, Ohio, and an immersive experience awaits those who seek out the locations. The brooding Ohio State Reformatory played the role of the fictional Shawshank State Prison in New England. Warden Norton's office, the parole board meeting room and the tunnel through which Andy Dufresne escaped are among sites waiting exploration.

A self-guided Shawshank Trail Driving Tour leads devotees to 15 filming sites including the courtroom where Andy was wrongly sentenced for killing his wife and her lover, and the bus station where Red purchased a ticket to join Andy in Mexico. For more information log onto shawshanktrail.com.

Another locale provided the backdrop for one of a number of iconic characters played by Tom Hanks. Most locations portrayed in Forrest Gump, for which Hanks won an Academy Award, were grouped around Beaufort, South Carolina. 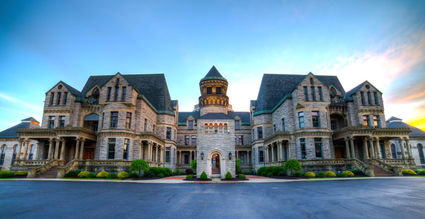 The Ohio State Reformatory, in Mansfield, Ohio, played the role of the fictional Shawshank State Prison in "The Shawshank Redemption."

The fictitious town of Greenbow, Alabama, where Gump lived as a boy, is played by Varnville. The tiny bridge with a 'Mississippi Welcomes You' sign which Forrest crosses is east of Beaufort. Even the realistic Vietnam War scenes, when Gump first meets Bubba and Lieutenant Dan, were filmed on barrier islands off the Beaufort coastline. The list of settings, imaginary and real, includes places at or close to where they're depicted in films. The dreamlike baseball diamond in the middle of a corn field in Field of Dreams (1989) is at a farm in Dyersville, Iowa, a town of about 4,000 people near the state's eastern border. Fans of that movie continue to show up to tour the farm house and regulation sized field. For more information log onto fieldofdreamsmoviesite.com.

Alfred Hitchcock's frightening film The Birds (1963), in which flocks of murderous sea gulls and crows attack humans, was filmed in and around Bodega Bay and the nearby town of Bodega, a former fishing village on California's coast. In fact the inlet is located along a major migration route and is a popular bird-watching site.

Among places associated with the motion picture are the Potter School building (now a private home), from which terrified children ran screaming while being attacked by birds, and the Tides Wharf and Restaurant.

Countless other places throughout the country also have played roles in numerous motion pictures. They wait discovery and delight by fans seeking to keep alive memories of favorite movies.