Klondike Mike and the piano 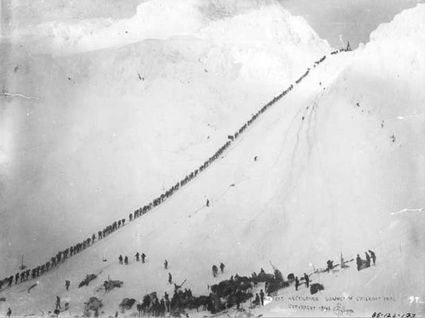 Klondike Mike Mahoney climbed the famed 1,500-step Golden Staircase to the summit of Chilkoot Pass with a piano on his back in 1898.

Klondike Mike Mahoney's return trip to Dawson in 1898 included a hike up the Chilkoot Trail with an unusual item strapped to his back: a piano.

It all started when Mahoney hopped aboard the City of Seattle and found it stuffed to the bulwark with passengers, freight and a variety of animals, including more than 100 dogs headed to Skagway on consignment and horses crowed into stalls in the dining room.

Henry told Mahoney that he was sure the miners would pay to see and hear the lovely creatures, according to This was Klondike Fever by Harold Merritt Stumer.

"Luxury goods, that's what brings in the money, and that's what my girls are," Henry said. "They're beautiful, they're talented, and they're personable, and those woman-hungry miners will pay anything to see them perform."

Mahoney agreed that the girls would be popular, but he questioned whether they knew the hazards that lay ahead on their 650-mile journey between Skagway and Dawson.

Henry said his girls had traveled all over the world under all sorts of conditions, and he was sure they could make it to Dawson. But he wasn't so sure about the piano.

"They say Skookum Jim toted a 200-pound load of bacon up the Chilkoot, and if he did, I'll get your piano over somehow," Mahoney said.

Once the City of Seattle docked in Skagway, Mahoney secured drivers and teams to carry the party's outfit. But no one would touch the unwieldy piano. So Mahoney decided to carry it himself.

The drivers hoisted the piano onto Mahoney's back. The prospector then adjusted the weight and walked around a bit.

"Hell," he said, "any husky kid could pack that thing. With the right pack harness and a shoulder pad it ought to be a lead pipe cinch."

Mahoney and his drivers ferried over to Dyea, where they lashed the piano to a sled and fell in with a long line of gold seekers using dogs, horses, mules, oxen, burrows and reindeer to pull sleds loaded with supplies up the trail. They traveled from the head of Lynn Canal up the Dyea River, over piles of glacial moraine to Sheep Camp, where the 1,500-step Golden Staircase to summit Chilkoot Pass began.

For more than 30 minutes Mahoney waited for his chance to step into line with his oversized load on his back. Once he landed on the first ice step, he coordinated his pace with the swing of the piano and didn't break the rhythm except to rest a few times.

At the top of the summit, he eased the piano down and then tied it to the sled that one of the drivers had carried up.

A corporal with the Canadian Mounted Police asked Mahoney what he had in the sled.

"A piano," Mahoney replied and then explained all about the theatrical group and its plan to entertain miners in Dawson.

The policeman told him no one would be permitted to take six women across the border.

Mahoney argued in vain and finally returned to Skagway, where Henry had already received the news. Both men were somewhat relieved that they wouldn't be dragging six females hundreds of miles to Dawson.

The piano remained at the top of the Chilkoot Pass for quite some time. It eventually ended up in a saloon in a town that sprang up between the passes and Lake Bennett.