The terrain will be familiar to Alaskans 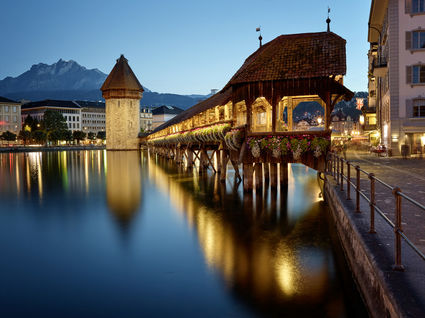 Stroll across the 14th-century Kapellbrücke that spans the Reuss River in Switzerland's Old Town of Lucerne. It is more than a bridge, but a 17th century wall of murals by Heinrich Wägmann that chronicles events from Swiss history and myth.

The first time I traveled to Switzerland I felt like I was in a postcard and any moment I'd step through it. I felt the same about Alaska. Places so mind-bogglingly beautiful cause one to go around with your mouth open - it's just "wow, wow, wow" all the time.

And the Swiss are very nice, very polite and very, very clean.

From the quaint villages and farms pitched on a 45-degree mountainous angle to cosmopolitan towns like Geneva, Lucerne and Zurich, your experience in this tiny country is sure to be stress-free. And while violent acts against tourists have happened in other European countries, Switzerland has the fewest. Since 2013, the Swiss Federal Intelligence Service has warned of a heightened threat emanating from jihadi terrorism in Switzerland. But so far so good.

Neutral in war but everyone is armed

Switzerland has a long history of neutrality, and its armed forces do not take part in conflicts in other countries, but it does participate in international peacekeeping missions as part of the NATO Partnership for Peace program.

The Swiss militia system stipulates that soldiers keep their own personal equipment, including all personally assigned weapons, at home. Compulsory military service applies to all male Swiss citizens at age 18, with women serving voluntarily.

Why is my favorite war memorial in Lucerne? In a tranquil setting, the resting lion with an expression of grief on its face carved from a solid wall of granite, the Lowendenkmal, memorializes the loss of six hundred Swiss Guards that defended King Louis XVI and his family in August 1792. The Swiss mercenaries were overtaken by the revolutionaries after their ammunition ran low.

"Denkmal" in German translates as "think" and "once," and I've always felt it means to stop and really dwell for a time on what happened.

On my initial trip, we took the train from Zurich, which at that time was mostly wood and filled with Swiss in traditional garb who were very welcoming by offering us fruit and cheese.

It was a magical train ride and I highly recommend crossing Switzerland this way.

But first take the two-hour, $25 Zurich Old Town Walking Tour that offers fascinating insights into the city´s colorful history - down alleyways and through bustling downtown squares. Go to https://www.zuerich.com/en/visit/tours-excursions/zurich-old-town-on-foot for more information.

Interlaken with BLS boat services. If you have a first class pass, you get free access to the SBB lounge in the Zürich train station.

For $236 for one adult, the Swiss Pass allows you three continuous days in second class.

For other itineraries and prices visit https://www.swissrailways.com.

Remember, Europe is small so if you want to visit other countries, too, a Eurail Pass might be the ticket.

We overindulged in this cheesy Swiss treat (pack a laxative), but it was worth it. Made of a melted mix of Gruyere and Emmentaler cheeses with white wine and Kirsch, a dark cherry brandy, it is a cherished memory. At Hotel Lucerne, we dipped our bread cubes in time after time, while sipping white wine, and I tend to go for a Riesling with fondue because its fruity undertones compliment the Kirsch.

We stayed at the Hotel Des Alpes overlooking the Reuss River and the Kapellbrücke bridge. Only a five minute-walk from the Lucerne train station, it is a casual hotel in one of the stately row buildings that line the waterfront that also features outdoor cafes. Clean and comfortable, it offers rooms with a city view starting at $166 and a river view at $198.

The Swiss Franc equaled $1.01 US this winter and went as low as 99 cents in mid-March. The Franc is the only currency accepted in Switzerland as the Euro is considered a foreign currency in this country. If you pay with Euros, the change will be in Swiss francs and the exchange rate is usually not in your favor.

You're in watch country

I have the wind-up watch I bought in Lucerne at age 16 and it still works. Popular brands like Tag Heuer and Rolex are made here, as well as less expensive brands like Tissot. Simple, elegant and dependable, Swiss watches are legendary. 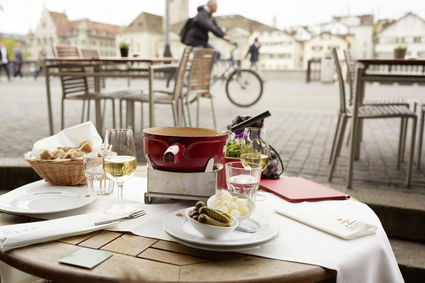 Fondue, that signature Swiss dish of popular ingredients of wine and Kirsch, a clear, colorless fruit brandy made from double distillation of dark-colored Morello cherries.

Lucerne is one of the major marketplaces for Swiss watches, and you can browse through the more than two dozen boutiques, most of them located around Schwanenplatz - a four-minute walk over the Chapel Bridge. Schwanenplatz translates as "swan place," and yes, there are swans in the river.

A bridge with a history

Kapellbrücke or Castle Bridge is a 14th century wooden bridge and perhaps the oldest wooden bridge in the country. The bridge and its water tower mark where the waters of Lake Lucerne flow into the River Reuss. Once part of the ramparts of Lucerne, its northern section originally led into St. Peter's Chapel.

All along the bridge there were once 158 paintings near the ceiling until 1993 when just 47 escaped a fire and only 30 others were successfully restored.

Lucerne's Water Tower also served as a dungeon, an archive and a treasury vault until the 19th century. The tower is not open to the public and is only used by a traditional organization. It is lovely to stroll along this bridge and when it's lit up at night it glows.