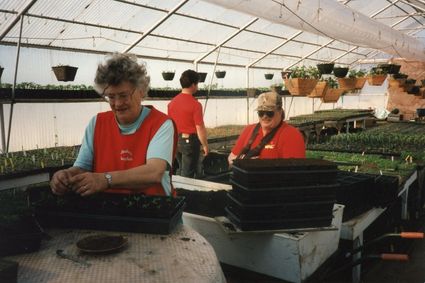 Evelyn Bush and her son Bob work inside a Bushes Bunches greenhouse in April 1995.

"If you have room, would you like to take a petunia wave basket?" asked Evelyn Bush, a former employer of mine.

"You can't just give away baskets for free," I replied. But when her granddaughter, Michelle, said Evelyn could very well do whatever she pleased, I accepted.

Of course I could find room in our truck camper for a free flower basket, even if it was already full. Bushes Bunches Greenhouses and Garden, just outside Palmer on the Old Glenn Highway, was my husband Gary's and my last stop on our way home to Slana that day in May 2004. We were returning from Homer after celebrating my dad's 90th birthday.

I had already gathered pots of sugar lump tomatoes and six-packs of blue and lilac wave petunias, parsley, lobelia and marigolds and we were ready to check out. It felt natural to write up my own sales ticket, because I had previously worked at Bushes Bunches for six seasons.

Evelyn and Michelle introduced me to two new employees who were taking their lunch break and the new handyman who was sewing a patch on the ground cover in the perennial display area. I commented on flats of vegetable starts waiting to be transplanted and was invited to stay and work. They said Gary could come back in a week and pick me up! That was oh so tempting. Transplanting was probably my favorite part of the job duties.

I worked at Bushes Bunches from 1994 through 1999 for three months each spring – mid-March until mid-June. The greenhouses were open all summer, but by the time everyone had their gardens planted, most of the bedding plants were gone and Evelyn could handle the bush and shrub sales by herself.

Filling flats containing six packs or other size cells with soil and potting mix, transplanting, watering, weeding, potting up to the next size, and helping customers were the main duties. I started at the bottom of the heap and gradually worked up to being allowed to seed many flowers and vegetables in the later years.

Most of April, three of us stood around a tall round table transplanting whatever was on the list for the day-perhaps snapdragons, pansies, marigolds or any one of a number of other flowers. On the days we worked with tomatoes, the assembly line process went much better with at least four people. Two planted in the soil bin, two watered, staked, and dry dirted, and one hauled the pots to the shelves at the side of the greenhouse. Someone had to write labels with a wax marker, too. On those days, I went home exhausted from simply moving that much soil in one day.

It was important to put the little starts in the correct size containers when transplanting – six packs, deep six packs, eighteens, regular and tall three-inch pots, cross bands, etc. One day during my third year, I was boss for the afternoon. Michelle had the day off and Evelyn had gone upstairs for a while. We were to work on marigolds and I knew what size containers and what color plastic markers to write labels on. I selected a flat labeled yellow, orange and mixed. What I didn't see was that it was also marked "tall". Three of us spent the next two hours putting "tall" marigolds in the wrong pots.

Of course it was not economical to redo the whole thing. By June 1, those marigolds that hadn't yet sold, had to be watered twice a day because they dried out so fast with not enough soil.

Periodically flats of plants had to be shuffled from one greenhouse to another, mostly after we had used up every square inch in the main one. That biggest greenhouse had a wood-burning barrel stove, which felt great during those early March days, as well as propane heat. Besides the greenhouse attached to Evelyn's home, there were two others.

During the shuffling and moving of flats, we often carried two at a time of the lighter plants. If anyone ever dropped a flat and had a mess of soil and starts, we salvaged what we could and said that the flat had been "invigorated". No one wanted to be responsible for "invigorating" a flat on purpose. The same held true when big cartloads of flats were transported from one area to another, or to a customer's car. If we didn't set the brake, the whole thing could tip in the unloading process.

There were no weekends off during May when customers were so thick they sometimes backed up six cars deep even with a circular driveway. Most of the transplanting was finished by mid-May and the greenhouses were really too hot to stay in very long while wearing our red aprons. The aprons identified us as employees to the customers and we needed the pockets for our tools – markers, sales ticket pad and pen, twist ties, etc.

There were perks working at Bushes Bunches. If a few little starts were left over from a transplanting session, Evelyn didn't mind if we took them home. Of course we all knew they would be happier and grow better at her place. We got paid every two weeks on Friday afternoons. Even though we received an employee discount, by the time Michelle subtracted our personal purchases, some of us didn't have much of a paycheck left during the month of May.

Many fond memories flashed through my mind, but Gary said we needed to hit the road. I gave Evelyn, who was then over 80 years, a hug and said, "My most favorite work experience was here with you." 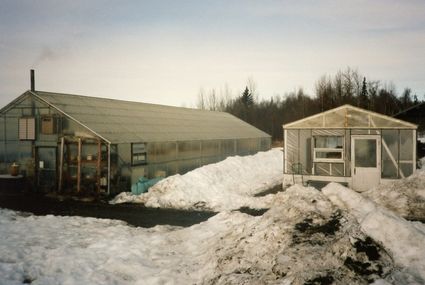 Two greenhouses at Bushes Bunches Greenhouses and Gardens, April 1995. Don't let the still setting fool you: the workload was intense during the spring season.