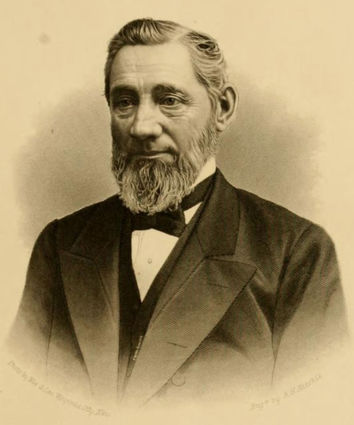 The first appointed governor of the District of Alaska, John Henry Kinkead, served less than a year due to a scandal involving renowned missionary Sheldon Jackson.

After Alaska became part of the United States in 1867, the U.S. military ruled America's newest possession for about 17 years. Then on July 4, 1884, U.S. President Chester A. Arthur appointed Republican John Henry Kinkead of Nevada as the District of Alaska's first governor.

And Kinkead has the distinction of serving as the district's governor for the shortest amount of time – less than a year – as he resigned in May 1885.

Kinkead, who served as Nevada's governor from 1879 to 1883, knew quite a bit about the Great Land. He journeyed to Alaska with the "Occupancy" Commission in 1867 and had witnessed the transfer of Alaska from Russian to American possession that October. He then became the first U.S. official to hold office in Alaska when President Andrew Johnson appointed him postmaster. Kinkead, who had much experience in milling, mining, mercantile and building smelters in Nevada, also operated a trading post and served as Sitka's unofficial mayor until 1872.

Along with the rest of his personal possessions, the new appointee arrived in Sitka to take the job of Alaska's governor with a large supply of cases labeled "canned tomatoes." But it turns out that the contents of those cans tasted exactly like Scotch whiskey and produced the same effect, according to a noted Presbyterian minister of the time.

Kinkead, and other early governors, had little to do in their official capacities as Alaska's first governors. They were instructed to inspect, report and enforce a handful of contradictory laws with no enforcement powers.

His only gubernatorial report, submitted in October, requested the establishment of new mail services, a legal code, creation of a tax collection agency for the district, a boat to allow the governor to travel within Alaska and expanded financial aid.

During his short tenure as Alaska's main man, Kinkead broke his arm, had a stroke and managed to get into heated disagreements with renowned Presbyterian missionary Sheldon Jackson, who thought Kinkead was too close to those with mining interests.

It was rumored that Kinkead had a hand in getting Jackson arrested on trumped up charges to shut him up. Jackson was put in jail for obstructing a public highway with a fence and building used for a school that he'd built to educate Native children. Sources say Kinkead and other officials did not want the Natives to be educated.

The resulting scandal gained national attention and many blamed Alaska's new governor for the incident.

After the false charges against Jackson were dismissed, Kinkead was politely asked by President Cleveland to return to Nevada. Kinkead submitted his letter of resignation on May 9, 1885, less than a year after taking office.

He returned to Carson City, Nevada, and resumed his mining and mercantile efforts. He died there on Aug. 15, 1904.