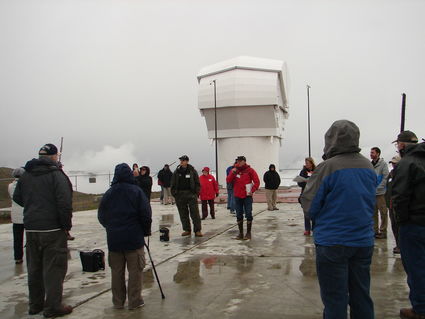 Visitors learn about the Nike Site Summit, outside of Anchorage, during an August 2017 tour.

Friends of Nike Site Summit and the Alaska Association for Historic Preservation invite the public to their tenth annual open house Thursday, May 9, from 5:30 to 7:30 p.m. in Anchorage at the Atwood Building, 550 West 7th Ave. The evening will include information about the restoration of Site Summit, the former Nike Hercules missile battery atop Mount Gordon Lyon in Arctic Valley. Participants will obtain information about tours and volunteer opportunities and view a slide show about restoration efforts.

A safety brief, mandatory for all volunteers, will begin promptly at 5:45 p.m. Volunteers who miss this briefing will have another opportunity to take the training later in May, or they will need to attend training at Range Control on Fort Richardson, conducted at 10 a.m. on the first and third Wednesdays. Snacks and refreshments will be served.

Friends of Nike Site Summit was formed by local volunteers in 2007 to advocate for the preservation of Nike Site Summit. In 2009, it partnered with the U.S. Army (now Joint Base Elmendorf-Richardson), the National Park Service and State Historic Preservation Officer to preserve the historic mountaintop fortress overlooking Arctic Valley. The group's mission is to preserve and interpret the site for the education of current and future generations about the Cold War, and by doing this memorialize the millions of veterans who served during the Cold War.

After stabilizing three sentry buildings in 2009 and 2010, the group began stabilization work on two larger, more damaged buildings, the Missile Maintenance and Launch Control buildings. The group subsequently rebuilt the facility's dog kennels, which had been scheduled for demolition. There is still much work to be done, and Friends of Nike Site Summit is raising funds for more extensive work, acquisition of a decommissioned missile and its permanent endowment fund.

Call (907) 694-3570, email fonss2007@gmail.com or visit http://www.nikesitesummit.net for more information about the open house and the organization. The group is on Facebook at Friends of Nike Site Summit, and on Twitter, @_FONSS.