Fishing for lures leads to a scary swim 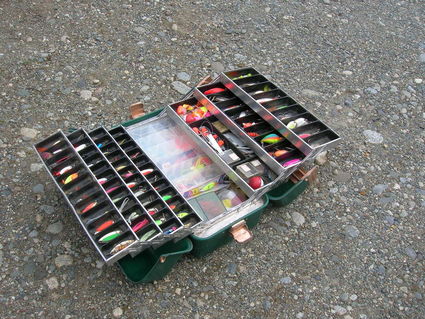 Gary's tackle box with lures from the snag in the Chena River. He has given some away over the years, so it isn't as full as it used to be.

To get to his construction job site those early summer mornings in 1974, my husband, Gary, could either drive 24 miles into Fairbanks and then another 25 miles to Eielson Air Force Base, or drive 4 miles down Chena Hot Springs road, park the car, take the canoe across the Chena River and get a ride with a co-worker who was camped there in the campground.

The shortest route usually won out, and so a lot of river crossings took place - to work in the morning and from work in the evenings, six days a week. While paddling across, Gary spotted a large tree trunk underwater that was covered with shiny fishing lures. Apparently the Air Force guys spent a great deal of time fishing at this spot and had lost many lures to the snag.

Soon Gary and Steve, his co-worker, were figuring a way to retrieve this underwater gold mine. A special pole with a hook at the end to snag the lures was rigged up. About a half hour after work was set aside for this pastime each day. The lures were divided between the two guys.

One evening Gary brought the canoe over to get me while I was parked in the car waiting on my side of the river. We went back over to have dinner with Steve's wife and family. After our visit and on the return crossing, Gary decided he wanted to get a few more lures. I protested but Gary was confident that we could manage. He said to me, "All you have to do is keep the bow pointed upstream. Simple."

I paddled hard, but my muscles certainly couldn't compete with Gary's, and I weighed only half as much as he did. It wasn't long before I felt like I couldn't keep it up. It sure seemed like it was taking Gary a long time to connect with this lure. I hollered, "I'm losing it. We're starting to

He was leaning over the side of the canoe, eyes staring intently into the water and he hollered back, "I've almost got it." With that perfect timing, Gary leaned over more, tipping the canoe, and at the same time the canoe swung around crossways with the current.

I screamed and Gary tried to sit upright, but realized it was too late as we rolled backwards into the river. The next thing I knew, I was going down surrounded by very cold, dark water. It happened so fast that I didn't have much air. I thought about Gary, but I knew he could swim, so I decided to look after myself. This would take some doing, as I didn't know how to swim and had never been in water over my head. This particular hole was probably about eight feet deep.

My first priority was to get to the surface for air. I couldn't find anything to push myself off from, so I just started paddling with my arms and legs in the direction I thought was up. Sure enough, after a short while I surfaced and found air, taking in a giant gasp. I heard another gasp nearby, before the current took me back under, and I figured it must be Gary. Hearing his gasp made me feel discouraged, though, because I felt he must not be doing any better than I was, and I shouldn't expect much help from him.

Once again my head surfaced and I sucked in the air. I heard Gary's gasp. There was no time to talk, but I tried to look around for shore. I tried not to go under again, but didn't seem to have much control. The third time I came up for air, Gary was nearby and grabbed my arm. Safe at last!

Gary got us to shore without much help from me. He then rescued the canoe and oars, which were downstream just a ways at a bend in the river. Of course we were still on the wrong side of the river, so he had to persuade me to get back into the canoe to cross over to the car. We were dripping wet and shivering as we tied the canoe to the top-carrier and drove the four miles home.

We had just recently purchased 10 acres of raw land, and moved a 10' by 60' foot mobile home onto it. We had no electricity yet to run the furnace, or even a wood stove hooked up for heat since it was summer. We changed into dry clothes, turned on the propane oven, opened the door, and stood in front of that for a few minutes. It didn't seem to help much, so we just got into bed and snuggled into the quilts. 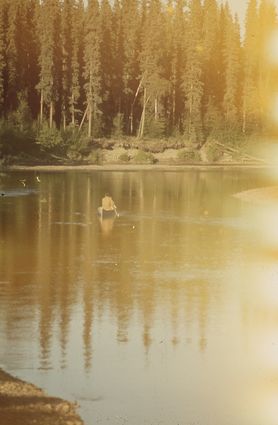 Getting dunked into the Chena River had been a very serious situation as far as I was concerned. I had been terrified! But, in bed we started talking and even laughing at the irony of not even having a place to get warm. The next project was to get the Franklin fireplace hooked up before winter.

Gary never asked me to fish for lures with him again. He and Steve continued to recover them. Many times the GIs were fishing on shore watching. They would frequently buy back lures from Gary and Steve. In fact, one GI twice bought his own special homemade lure back for $2 each time. By the end of the job, they felt they had the best stocked tackle boxes in the state. Gary estimated just his half to be about 200 lures from homemade to the most expensive store-bought.