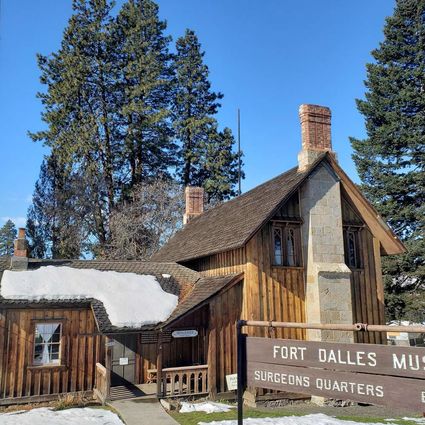 Most Alaskans who hop on an airplane and fly south aren't typically looking to land in Oregon for a dose of sunshine and dry heat. After all, the beaver state is among the rainiest on the west coast, right? Well, yes and no.

Oregon does have rainforests, lush greenery and access to the Pacific Ocean within a few hours of hub city Portland. But also in reach is the vast Columbia River Gorge, a natural wonder to the east boasting fantastic scenery and a wealth of outdoor recreation. The river itself is a massive flow of fresh water with 14 dams providing hydroelectricity to businesses and households across the Pacific Northwest. 'The Gorge,' as it is known, is a string of communities and cultures supporting themselves among the rocky reaches of this river for centuries, and today represent a growing segment of Oregon's tourism industry. One city, The Dalles, is particularly interested in positioning itself for visitors interested in a wide range of activities in and around this city of nearly 16,000.

Many people arrive in The Dalles via boat thanks to the popularity of small ship cruising. Reaching the over-55 market, such cruise lines on the Columbia and nearby Snake River combine a multitude of soft adventure activities like hiking, biking and kayaking with more serene opportunities to become acquainted with the community.

But for independent travelers, one of the best ways to reach The Dalles is via the Historic Columbia River Scenic Byway, America's first designated scenic highway, and a National Historic Landmark. This 70-mile route winds through some of the most breathtaking scenery in and around the Columbia Gorge, with high desert, lush forests and tumbling waterfalls along the way. Long before drivers reach The Dalles, they'll be caught up in the cultural and historical hallmarks of the Pacific Northwest's trade and wagon train routes. ( https://traveloregon.com/things-to-do/trip-ideas/scenic-drives/the-historic-columbia-river-highway/ )

For Alaskans looking for something outside the boundaries of bustling Portland or Seattle (four hours to the north), The Dalles presents a nice option for great weather (300+ days of sunshine) and unique scenery.

The Dalles plays a major role in Oregon history as one of the oldest permanently-occupied places in the state, and an end point for pioneers traversing the notorious Oregon Trail. Diving in to that history is very easy, since many structures in The Dalles have been or are in the process of being renovated to pristine condition. The Dalles Chamber of Commerce building, in fact, is one such place, so stop there for maps and information, including a brochure for a walking tour of downtown. ( http://www.thedalleschamber.com ) The Dalles Chamber also provides a basic itinerary for those interested in a historical tour of the community. Called "The Oregon Trail, The Pioneers, & The Oregon Story," this self-guided tour is an easy weekend or two-night weekday exploration of The Dalles' efforts for historic preservation. From 15 historic murals and billboards scattered throughout town to a pioneer cemetery along East Scenic Drive, visitors can wind their way around town, becoming a part of the community tapestry.

The Fort Dalles Museum is one of Oregon's oldest, and is located in a neighborhood just above town. Featuring an abundance of artifacts and buildings, vehicles and the completely-restored Anderson homestead, the property is a must for anyone looking to understand the community's backstory. ( http://www.fortdallesmuseum.org )

To capture a sense of Columbia Gorge geology, topography and ancient history, including that of the many indigenous groups that settled in the area so long ago, take a trip a few miles out of town to the Columbia Gorge Discovery Center and Museum. With comprehensive exhibits explaining everything from the Ice Age to Lewis and Clark and the Gorge's position in the hydroelectric industry, the center truly does offer an opportunity to "be present...in the past." ( http://www.gorgediscovery.org )

The Dalles has its share of kitsch, too, and my favorite stop was at the National Neon Sign Museum, located on 3rd Street downtown. Housed in the historic Elks building, a treasure in itself, this museum showcases our country's pop-culture history and industry through the lens of something most Americans tend to take for granted: signs and advertising.

Boasting both familiar (and unfamiliar) glittering signboards, marquees and blinking, buzzing neon tubes of light, the Neon Sign Museum is a step back in time, and founder David Benko has created a 501(c) 3 organization to ensure this classic characteristic of American life is never forgotten. ( http://www.nationalneonsignmuseum.org ) 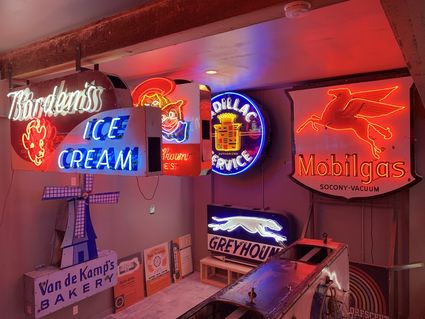 In downtown The Dalles, the National Neon Sign Museum is a trove of treasures from the past.

The Dalles also excels in the art of combining dining with history as well. Freebridge Brewing is located in the historic Mint Building on 2nd Street, and the Historic Sunshine Hill Winery was constructed in an enormous mill building easily seen from Highway 84 and most of downtown. For a sweet tooth, visit the SweetHeart Bake Shop on Lincoln Street inside the Edward French House. This small-batch bakery is made complete by its cozy nooks and crannies that all but beg one to sit down and stay a while (tip: try the macarons - you'll thank me later).

I'm not completely sure of what attracted me so to The Dalles. Perhaps it's the influence of businesses and energetic people committed to restoring the city's valuable past, or the character in the city's "Hometown USA" atmosphere. Whatever the case, I was charmed, and can't wait to return.

For more information about The Dalles and the historic Columbia River Gorge, including options for lodging, dining, and activities, visit The Dalles Area Chamber of Commerce, http://www.thedalleschamber.com.

Erin Kirkland is an Alaska-based freelance writer and author.