Head out across Alaska for summer fun

Festivals, derbies and a Woodstock flashback 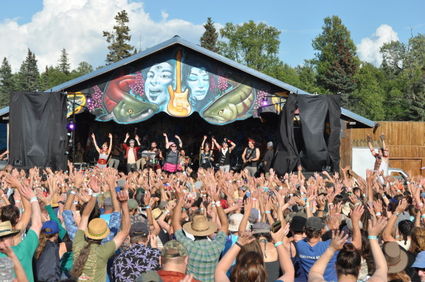 The crowd rocks out at Salmon Fest in Ninilchik. You can too! This year's fest takes place Aug. 2-4

From north to south, Alaska has some great festivals for you to attend, so get out and meet the rest of your state.

The 38th Midnight Sun festival in downtown Fairbanks brings you the best of Alaska -with food trucks from across the state, Made in Alaska crafts such as pottery, jewelry, art and clothing.

Along with the car smash, an Alaska-style junker derby, events include pony rides, a gold panning booth, a skate park and a midway on 4th Avenue.

Just Google 2019 Midnight Sun Festival for further details as they are still in the planning stage.

I had a ride all set for Woodstock 50 years ago, but someone said "pig farm and rain," and that's all I needed to hear to bail. I grew up in the country and I know what pigs smell like.

Salmonfest 2019 happens August 2-4 in Ninilchik on the Kenai Peninsula.

Amazingly, singer/songwriter Ani DiFranco, who has been performing since the age of nine, is the headliner at Ninilchik. Having released more than 20 albums, her music has influences of folk-rock and alternative rock with additional influences from punk, funk, hip hop and jazz.

Jason Mraz is an American singer-songwriter who first came to prominence in the San Diego coffee shop scene and his debut album "Waiting for My Rocket to Come" included the hit single "The Remedy."

There's food and beer brewers, of course, along with craftspeople and artists. There is camping so haul your tent or drive down your RV.

Tickets are on sale now at https://salmonfestalaska.org.

Oh, and Ray Troll will be there with his band, because it's all about salmon, that's why!

Then go out and catch a fish

The Seward Halibut Tournament runs from June 1 to June 30, giving you plenty of time to sink that big hook. And the prizes are especially appealing: Heaviest fish takes $5,000, second place, $2,500, and third place, $1,500. Heaviest fish caught by a woman or a youth (16 years and younger) also win $500 cash each. Tagged fish earn from $250 to $1,000 per tag in gear or cash and the heaviest fish turned in daily wins a tournament hat and a three-day 2019 entry ticket.

All prizes will be finalized and awarded within three days of the close of the tournament, so be patient. Prizes are based on the weight of the fish a the time it is weighed on the official weigh-in scale at the designated weigh-in station.

Winners need not be present to win.

There is also a Stay & Play Package at Seward Military Resort, for active military.

Go to http://halibut.seward.com for more information.

From Saturday, Aug. 17 to Sunday, Aug. 18, The Hotel Alyeska Pond Courtyard opens its doors for free to the annual Blueberry Festival.

This is a great chance to see this spectacular resort and hear live music, including headliners Good Time Travelers. There'll be berry picking, local arts and crafts booths, tasty blueberry treats, a beer and wine garden, hiking and biking, blueberry creations and more.

Of course there will be a pie-eating contest, for both kids and adults. For an entry fee of $5, on Saturday and Sunday, from 1:15 to 2 p.m., you can make yourself sick but be a hero to your family at the same time.

There's free chairlift rides on Bear Cub Quad, noon to 6 p.m., and Chair 7, 3 to 6 p.m., to reach the best blueberry picking sites. Bear Cub Quad will be open for foot traffic starting at noon. Park at the Daylodge and take the chairlift to the festival. Chair 7 will open at 3 p.m. for picking.  Minimum height restrictions apply and a person must be 40" or taller, and no infants or strollers.

Drop off your blueberry specialty for the Blueberry Creations Contest on Sunday at the info booth by 1 p.m. for prizes and bragging rights.

On Sunday, lace up your sneakers for the Blueberry 5K Fun Run doing whatever you can - walking or running.

Please, leave your dogs at home.

Go to https://www.alyeskaresort.com/events/festivals/blueberry-festival-1 for a lineup of musical acts.

On Friday, June 14, from 6 to 9 p.m., and Saturday, June 15 from 1 to 6 p.m., Alaskan African Americans will celebrate Juneteenth in Anchorage, including a parade on Saturday June 15 at noon. The celebration takes place on the Delaney Park Strip, with food, merchandise, vendors, entertainment and more.

Juneteenth commemorates the end of slavery in the United States that dates back to June of 1865 when Union soldiers led by Major General Gordon Granger landed at Galveston, Texas, and announced that the war had ended and all slaves were now free.

But they had been freed two and a half years before on Jan. 1, 1863, when President Abraham Lincoln signed the Emancipation Proclamation. 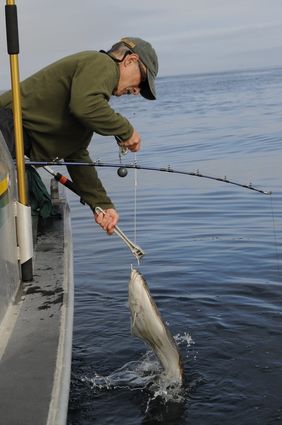 Jim Lavrakas eases a halibut into his boat, "Skookum". Fishing derbies abound throughout Alaska during the summer.

Texas hadn't heard about it because there were not many Union troops to enforce the Executive Order, but with the surrender of General Robert E. Lee in 1865, Granger's forces were enough.

In 2001, the Alaska State Legislature passed a bill establishing "the third Saturday in June each year to commemorate the abolition of slavery...and to reflect on the suffering and sacrifice endured by millions of early African-Americans and to appreciate the unique freedom and equality enjoyed by all state citizens."

As well, the Anchorage Assembly recognizes June 17 as "Juneteenth Day," and encourages the Anchorage community to participate in local events to celebrate African-American freedom, heritage and contributions to our American Culture.