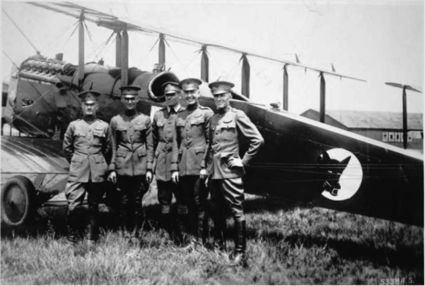 These four aviators were part of Brig. Gen. William "Billy" Mitchell's effort to show that airplanes could play an integral part in the nation's defense by flying four De Havilland DH-4B aircraft from New York to Nome in 1920.

The U.S. Army Service's famed "Black Wolf Squadron" planted its mark on Alaska history in 1920, when four biplanes flew across our northern skies in an attempt to prove the feasibility of long-distance air travel. The New York-to-Nome Alaskan Flying Expedition, as it was known, was comprised of a squad of four airmen with crewmembers flying wheeled DH-4 De Havilland biplanes.

The crew left Fort Mitchell in New York bound for Fort Davis in Nome on July 15, to demonstrate that the United States could establish an airway to Alaska and Asia. Due to a multitude of stops, inclement weather and a few mechanical problems, it took a month for the planes to fly across America and Canada. The squadron landed in Wrangell on Aug. 14.

The pilots then had a couple more stops on their way to Nome, including layovers in Fairbanks and Ruby. One pilot, Lt. Ross C. Kirkpatrick, flew over Juneau en route to Whitehorse on August 16 and made history for Alaska's capital city.

He airdropped a copy of the New York Times out of the plane for Territorial Gov. Thomas J. Riggs, Jr. It was the first mail to arrive in Alaska via air. The newspaper had to be collected from the roof of the Brunswick Hotel, and Gov. Riggs later sent a letter of thanks to Kirkpatrick.

The De Havilland DH-4, which had been used during daytime bombing raids during World War I, actually began flying mail beginning in 1918. According to the Smithsonian, where a DH-4 is on display, it was a rugged plane, "ideally suited for the task of delivering mail throughout the United States."

But dropping mail to our territorial governor was not the main mission of the Black Wolf Squadron. The transcontinental flight was conceived by Brig. Gen. William "Billy" Mitchell, who whole-heartedly supported air travel in the Far North. He called Alaska the "Air Crossroads of the World," and even predicted that Japan would bomb Alaska one day.

He wanted to prove that Alaska truly was accessible by air – by friends and enemies alike. The Black Wolf Squadron flight marked the starting point for further aviation development, and

soon aviators like Carl Ben Eielson and Noel Wien were soaring in the skies over Alaska.

The planes touched down on the old parade ground at abandoned Fort Davis, three miles east of Nome at the mouth of the Nome River, at 5:30 p.m. on Aug. 23. The citizens of Nome had readied a strip 400 yards long and 100 yards wide for the event.

It took the airmen 55 hours of flying time to travel 4,500 miles, thus proving that air travel to the northwest corner of America was possible – and that air transportation could become more than a dream.

It took the Black Wolf Squadron a little more than three months to fly the entire route. They arrived back in New York on Oct. 20, with a total flying time of 112 air hours for the 9,000-mile journey.

In 1929, the men of the Black Wolf Squadron were awarded the Distinguished Flying Cross for their historic flight.