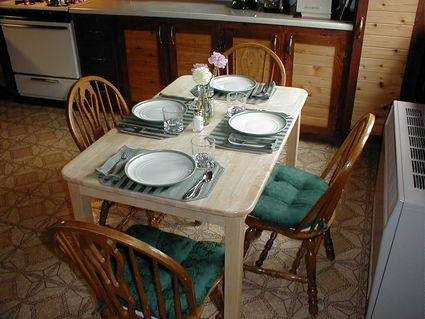 Many diverse conversations took place around this kitchen table at the Nabesna House Bed and Breakfast.

Many diverse conversations took place at our kitchen table when my husband Gary and I lived in Slana, partly because we ran a bed and breakfast in an area of Alaska that is off the beaten trail, but also because we lived next to the largest National Park in the United States – Wrangell-St. Elias. One Sunday in June 2006 stands out in particular.

We had fixed our specialty breakfast of blueberry pancakes, scrambled eggs and reindeer sausage and sat down to eat with our father-son guests. We didn't always eat with our guests, but this morning we did. The father had a strong Russian accent, even though he had immigrated to the United States in 1989 with his wife and children. The son, who was 14 when they immigrated, was almost 30 now. A military doctor, the son had recently been assigned to Elmendorf Air Force Base and the father was along for the drive to Alaska.

We talked about world situations, especially since the son had spent much time at Walter Reed Hospital treating causalities from Iraq -- young men with missing arms and legs from fighting what he felt was a pointless war.

The father inquired about our local school because his wife was a special-ed teacher in the field of reading. Since I had worked as a teacher aide at Slana School, I could answer his questions. He specifically asked if we had any problems with Fetal Alcohol Syndrome and said that was a big problem with the Native people in Russia, and that vodka was the most common alcohol. I responded that, yes, it was a very big problem in Alaska, but more so in the nearby villages of Mentasta and Chistochina than at Slana.

The father also commented that our Alaskan blueberries have the same wild taste as those in Russia and that Moscow was located at a similar latitude to us. We eventually agreed that the different cultures of the world have similar problems, but that we wouldn't solve them with further discussion. Soon they left for Anchorage, the last leg of their journey.

After church, we "spur-of-the-moment" invited another couple to our home for a Sunday dinner of Copper River Red salmon. They were teachers from southcentral California who had owned a cabin in Slana for 20 years and spend time in the area every other summer. Hispanic rallies concerning immigration problems were in recent news reports and we discussed all the pros and cons of that situation without coming up with a good solution.

Gary and I had no B & B reservations for that evening, but we never knew when travelers might drop in. After our lunch guests left and I cleaned up the kitchen, I sat down to read the Sunday newspaper comics before going upstairs to clean rooms. It was only a minute before a

their baggage and drove out the Nabesna Road to explore, giving me time to do the cleaning.

About an hour later, our "dog barking" alarm went off, alerting us to another vehicle driving in to the yard. This time it was Inge, a family friend originally from Germany, but now a U.S. citizen of 50 years, and her friend from Germany. They were returning to Homer from Juneau via the ferry and wondered if we had room for them overnight.

After a short visit around the kitchen table, and with a promise of fresh grilled salmon for dinner, Inge and Horace went upstairs to rest while Gary and I started processing some fishwheel salmon for the freezer.

Our B & B consisted of two official bedrooms and one overflow storage room (with a twin size bed), all sharing a single bathroom. When the couple from Switzerland returned, I took them upstairs and showed them their room, hoping that sharing a bathroom wouldn't make them change their minds. I introduced them to Inge and Horace, mostly by saying, "You both speak German", since I couldn't pronounce the names of the couple from Switzerland. In a second, the German was flowing hot and heavy. I recognized only two words, "Denali" and "Whitehorse".

When the salmon was almost ready to eat, I informed Inge and she, speaking in German, invited the other couple to join them. Between Inge's bread and cheese and the salmon, there was enough food for all four of them. Gary and I went back outside and continued our fish processing. My brain was tired from the two-hour lunch conversation and, after salmon for lunch, I didn't want it for dinner, too.

But, I was quite curious about the very animated German conversation I could hear around the kitchen table, especially between the two men. When I asked Inge about it later, she explained that it was a lot of "war" talk. Horace was a young German soldier during World War II and the other gentleman was a young child who remembered running to the cellar while the U.S. and Allies bombed the German occupied town he grew up in. They had exchanged personal war experiences over salmon at our kitchen table.

As I lay down to sleep that night and ran the day through my mind, I was amazed to think of the breadth of the conversations concerning wars, politics and social problems – from Russia and Iraq to California and World War II Europe – that took place in just one day.

We hadn't solved any world problems, but had certainly had civilized discussions. Could these "kitchen table" conversations be a missing ingredient in a recipe for a more peaceful world?