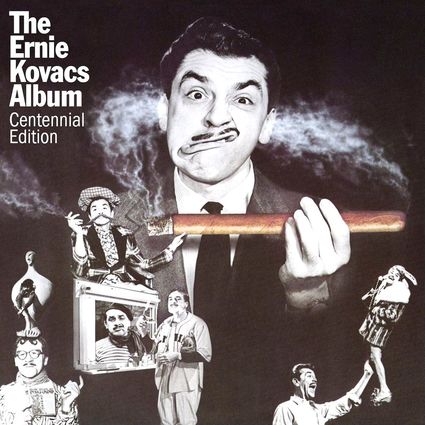 A new CD, "The Ernie Kovacs Album: Centennial Edition," was released in July.

"It's the centennial of Ernie's birth this year, so a great time to recognize this influential comedian," said Laura LaPlaca, the Center's Director of Archives. "The Kovacs' exhibit will remain until summer 2020."

Though he died tragically in a single car accident at just 42, Kovacs would leave his mark on comedy for decades. Like other pioneers of early television in the 50s who were exploring its boundaries such as Milton Berle, Sid Caesar and Steve Allen, Kovacs pressed it further by satirizing and lampooning the new medium.

"Unlike other comedians of the day who started on radio and basically put three walls up and created a TV show, Ernie did something different," said Josh Mills, whose mother (Edie Adams) was married to Kovacs at the time of his death. "Ernie had a cockeyed perspective of the world that few comedians have matched, a very surreal and offbeat way of looking at comedy."

This was most evident in Kovacs' TV shows which were broadcast on several networks throughout the 50s and early 60s in various versions and formats. They often featured innovative skits written by Kovacs which inspired later TV comedy formats.

"I've had conversations with Monty Python's Terry Gilliam who grew up in Minneapolis and he said that in Eisenhower's 1950s America you just didn't see anything like Ernie Kovacs," recalled Mills. "You see Ernie's influence on that show."

"Ernie influenced many entertainers including my husband (George Schlatter) when he produced Laugh-In," explained Brand. "When I worked on Ernie's show he began writing little scripts just for me which were really nice moments."

In one memorable 1961 skit introduced by the cigar smoking Kovacs, Brand played a weather girl seductively reading the forecast.

"Yeah, that one was famous," she said, laughing. "I watched it a while back on YouTube and wondered how it got by the censors!"

She says Kovacs worked himself and the crew hard, beginning at 6 a.m. on Sundays and working through the next day until 1 a.m.

"It was just cheaper to keep us going into overtime rather than coming back another day for a new set up," she said. "And Ernie would do everything – setting up the camera shots and working out technical problems. But he had a joy about his work and his creativity. He was a delightful and really sweet man to work with." 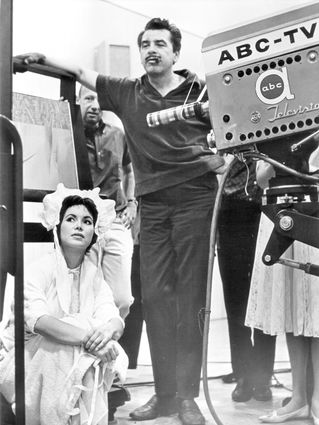 Ernie Kovacs and Jolene Brand on the set.

In addition to the exhibit, which contains Kovacs memorabilia provided by Mills who is the executive for the Kovacs estate, a new CD – "The Ernie Kovacs Album: Centennial Edition" – was released in July for the centennial (see http://www.erniekovacs.com).

"His work still resonates 60 years later because it's not topical," added LaPlaca. "It's experimental and still innovative. The National Comedy Center's museum environment is an excellent way to highlight his contributions to the history of comedy."