The discovery day that started the Klondike Gold Rush 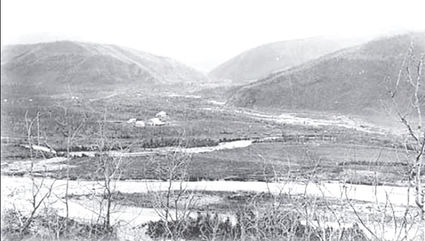 The Natives and Carmack found what they thought might be a good fishing spot and set their nets. They hauled in a few king salmon, but the fishing was poor so they gave up and cut timber instead. The sawmill at Fortymile paid $25 per 1,000 board feet – about $750 today – and the men saw it as a chance to make a few dollars before winter.

Skookum Jim, whose sister Kate had married Carmack, followed Rabbit Creek looking for good trees. That's when he noticed many flecks of gold in the water. After Carmack and Charlie caught up to him, the men decided to stake the Discovery Claim, which is the first claim in a region and becomes the center point of a mining district. Claims upstream from the Discovery Claim were numbered "One Above," and the claims downstream were called "One Below" and so on.

Skookum thought it should be his by right of discovery. But Carmack said a Native would not be allowed to record it. The men finally settled the issue by having Carmack stake the Discovery Claim and then assign a half interest in it to Jim. Since the discoverer was allowed a second claim, Carmack staked number One Below and then Two Below for Charlie. Skookum Jim staked One Above. The men then renamed the creek Bonanza.

The group sailed to Seattle and stayed at the Butler, one of the best hotels in town. But the hotel had so many halls and stairways that Carmack's wife used her skinning knife to slash a series of blaze marks on doors and mahogany banisters to keep from getting lost on the trail from their suite to the dining room.

Kate, Jim and Charlie acquired a taste for champagne while staying at the hotel and amused themselves by flinging bills and gold nuggets into the street. They watched gleefully as crowds pushed and shoved to get to the riches, which brought Seattle traffic to a standstill.

Those good times did not last, however. Carmack divorced Kate and remarried soon thereafter. He invested in Seattle real estate and operated a mine in California until his death from pneumonia in 1922 at the age of 62. He left a hefty estate to his second wife.

Kate returned to Caribou Crossing, later renamed Carcross, in the Yukon Territory and lived with brother Jim, who also supported her. Kate died in 1920.

Charlie sold his mining properties in 1901. He then bought the Carcross Hotel and spent the next seven years living lavishly. But during a drinking spree in December 1908, he fell off a bridge and drowned at the age of 42.

Skookum Jim sold his Klondike mines in 1904 and spent the next 12 years traveling the north vainly seeking another gold claim. Even though he received royalties of $90,000 a year – about $2.5 million today – he just could not stop looking for another big strike. He died in 1916.

Canadians keep their memories alive every year, though, as they celebrate all three men as co-discovers on August 17, Klondike Discovery Day.