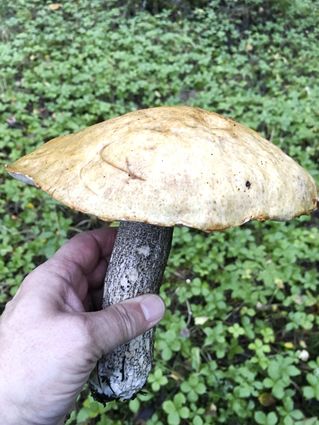 Alaska pops with mushrooms in August and September. Learn about hunting and identifying these wild (and sometimes edible) treasures at fairs and workshops. Experts strongly advise foraging with someone with experience, to become familiar with the many mushroom varieties.

Late summer and early fall mean mushrooms abound across Alaska. With over 97,000 identified species, mushrooms are second to insects in species diversity. From science and discovery to crafting and photography, mushroom hunting in National Forests, state parks and even your own backyard allows anyone to foster a greater appreciation for Alaska's natural fungi.

To become a seasoned mushroom hunter, one must first do their research, says Kate Mohatt, an ecologist for the Forest Service based in Girdwood and coordinator and keynote speaker for both the Cordova Fungus Festival and Girdwood Fungus Fair.

"It's good to start by learning the basics, knowing the characteristics of each genus and the major species found in Alaska," said Mohatt. "I recommend 'Alaska's Mushrooms: A Wide-Ranging Guide' by Dr. Gary Laursen of UAF, or 'Mushrooms of the Pacific Northwest' by Steve Trudell to start with."

With species being a subset of genus, the most common genera found in Alaska include Amanita, Boletus and Cortinarius, encompassing around 60% of mushroom species found in the state. Amanita muscaria, otherwise known as the fly agaric or fly amanita, is easy to identify for its white stem and red cap with white warts.

"The fly agaric is found statewide and across a variety of habitats," said Mohatt. "Alaska doesn't have a state mushroom, but I think it should be our state mushroom! It looks very charismatic and cartoonish, although it is toxic."

Another important aspect of mushroom hunting includes reaching out to others when venturing into the forest for the first time, shared Laurel Troudt, mushroom enthusiast and volunteer for the Cordova Fungus Fest.

"You definitely should start by going with someone that is familiar with mushrooms," Troudt said. "When you're out in groups together you can bounce knowledge off each other. The Forest Service also offers many great brochures."

In terms of the best time to hunt, the time varies greatly across the state. "The bulk of fruiting is August, September and October, but areas like Fairbanks will see fruiting earlier in the year like late July and August," said Mohatt. "They will come out earlier in the north because of how the ground freezes, and as you move farther south, they'll emerge later in the season - you could find mushrooms in the southeast in January."

Troudt notes that making small changes in the way you gather while foraging can go a long way for preserving the ecosystems you're exploring.

"When harvesting, it's also good to have a netted bag to spread the spores as you walk through the forest," Troudt said.

Reaching out, getting creative

Hands down, Mohatt and Troudt agree that the best way to receive a mushroom hunting education is to attend a mushroom festival or workshop, as false information abounds on the internet and ensuring proper identification is crucial when cooking or eating harvested mushrooms.

"Mushrooms have certain colors that can be really useful for dyeing," said Widmann. "You can use them to dye wool felt, wool yarn or silk. Other years, we've led crafts where we paint mushrooms onto picnic baskets or make dioramas with mushrooms made of needle felting techniques. Crafting lets you use mushrooms that are toxic and is another expansion of hunting." 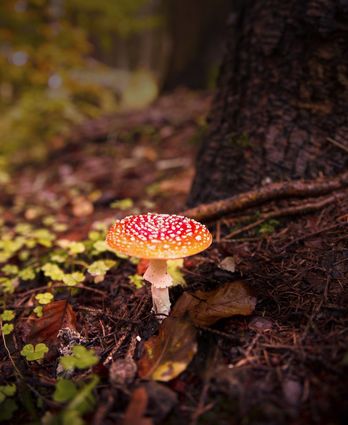 The iconic (and toxic) fly agaric is so abundant throughout Alaska, it should be designated the state's official mushroom, says Kate Mohatt, an ecologist for the Forest Service based in Girdwood and coordinator and keynote speaker for both the Cordova Fungus Festival and Girdwood Fungus Fair.

The Girdwood Fungus Fair is Sept. 7 & 8 at the Girdwood Community Room and is sponsored by the Turnagain Arm Mycological Society. Guided mushroom walks with mycologists leave every half hour and cost $10 per foray. Presenters have touched on medicinal uses of fungi and northern cultivation of far north fungi in the past.

In Anchorage, Campbell Creek Science Center is hosting Midsummer Night's Science Series: Mushroom Fair on Aug. 21 from 7 to 8:30 p.m., where local mushroom enthusiasts will foster discussion and share specimens from all over Southcentral Alaska.

Can't make it to a festival? Once you've learned the basics and started exploring, contributing to http://www.iNaturalist.org or http://www.Alaskamycoflora.org databases bolsters the online mycological community, said Mohatt.

"You need to post really high quality photos to have someone else identify them online," said Mohatt. "Make sure to include the cap, the underside and the substrate the fungi is growing on. Otherwise, no one will waste their time identifying without that."