On the trail of Japanese snow monkeys

Watch primates and warm your bones at the same time 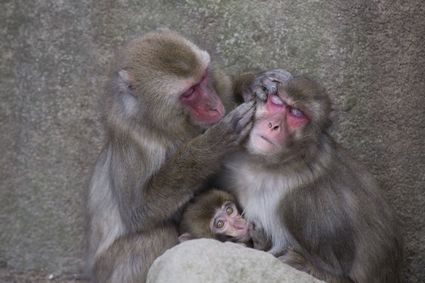 Japanese macaque snow monkeys are highly intelligent. Group grooming is a form of comfort and socialization.

We've all seen people who remind us of animals, like turtles or owls, but I once saw an elderly lady in a bank and she looked just like a snow monkey. I couldn't stop staring and decided that some day I'd go to Japan to see them.

Snow monkeys live in Jigokudani, which means "Hell's Valley" in Japanese, in Yamanouchi, Nagano Prefecture along the Yokoyu River, downstream from Shiga Kogen. Shiga Kogen is a ski resort and hiking spot, located in the Jōshin'etsu-kōgen National Park in the highlands of Yamanouchi, Nagano. See http://www.snowmonkeyresorts.com/2018/07/shiga-kogen-the-best-powder-in-nagano.

More than 160 Japanese Macaque monkeys live here in harsh climactic conditions in an area that is snow-covered for one-third of the year, scampering over the rough cliffs to take a bath and warm up at the hot springs.

The snow monkey is an Old World monkey species native to Japan that live in the areas where snow covers the ground for months each year and no other nonhuman primate is more northern-living, or lives in a colder climate. They have short tails, brown-grey fur and sport striking red faces.

They are a very intelligent species. According to a report, researchers left sweet potatoes out on the beach for them to eat, then witnessed one female, named Imo (Japanese for yam or potato), washing the food off with river water rather than brushing it off as the others were doing, and later even dipping her clean food into salty sea water. After a while, others started to copy her behavior, which was seen passed on from generation to generation. She was similarly the first observed balling up wheat with air pockets, throwing it into the water, and waiting for it to float back up before picking it up and eating it free from soil.

They've been seen to roll snowballs for fun. Also, in recent studies, the Japanese macaque has been found to develop different accents, like humans. Macaques in areas separated by only a few hundred miles can have very different pitches in their calls, their form of communication. The Japanese macaque has been involved in many studies concerning neuroscience and also is used in drug testing.

The Japanese macaque is also an important figure in Japan's religion, folklore, and art. In Shinto belief, mythical beasts known as raijū sometimes appeared as monkeys and kept Raijin, the god of lightning, company. The "three wise monkeys," which warn people to "see no evil, hear no evil, and speak no evil," are carved in relief over the door of the famous Tōshō-gū shrine in Nikkō.

The Japanese macaque is a feature of several fairy tales, such as the tale of Momotarō and the fable about The Crab and the Monkey, and the monkey is also part of the Chinese zodiac.

Across the Yokoyu River is Korakukan Ryokan where visitors can also enjoy an onsen bath. An onsen is a Japanese hot spring. As a volcanically active country and in the same Ring of Fire as Alaska, Japan has thousands of onsens scattered throughout all of its major islands.

You can bathe in the hot springs too by booking a stay at any of the local simple inns called ryokans that offer fine dining, hot springs bathing, sleeping on Japanese futons, and wearing a Japanese yukata (cotton robe). The inns can be as luxurious or as rustic as you want - there's 500 to choose from.

Contact https://www.japaneseguesthouses.com/ryokan-single/?ryokan=korakukan+jigokudani to book a stay at one of the 500 inns throughout Japan. Prices range from $138 to $184.

Some have monkeys nearby and it is not necessary to go to the park to see the monkeys, but if you wish to do so, visit http://www.snowmonkeyresorts.com.

The trip to the area is not a straight line, but the chance to see the countryside and people-watch more than make up for the travel time. 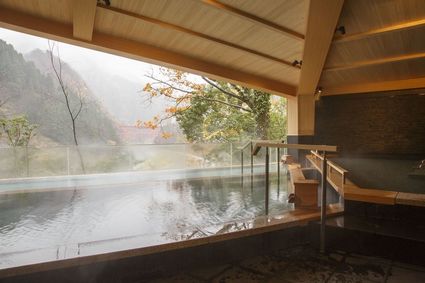 An onsen (hot spring) welcomes weary travelers. Inns can be as luxurious or as rustic as you want - there's 500 to choose from.

Both United and Delta fly to Japan and the round-trip is around $1,000, although you can find better deals on the discount sites online. Japan Airlines also has flights out of Los Angeles, and Alaska Airlines or American Air fills in the stops between, but there's a lengthy layover in LA (six hours), and it is a 10-hour flight from LA to Japan.