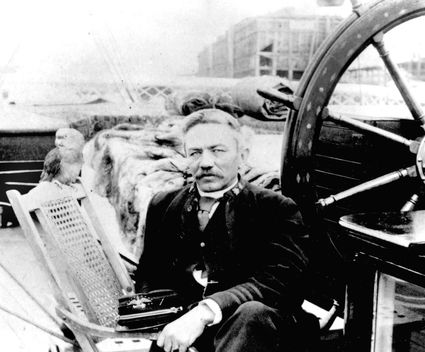 U.S. Revenue Marine Capt. Michael A. Healy provided law and order while sailing the seas of Alaska for more than 20 years.

A "floating court" of sorts evolved when justice was meted out from the decks of revenue cutters beginning in the late 1880s. And a commander in the U.S. Revenue Marine, precursor to the U.S. Coast Guard, was the first revenue cutter commander to make regular patrols into the harsh Arctic waters.

Captain Michael A. Healy was about the only source of law in a lawless land, and he transported criminals onboard the cutter Bear from remote Alaska communities to Sitka for trial.

Healy began his 49-year sea career in 1854 at age 15 when he signed on as a cabin boy aboard the American East Indian Clipper Jumna bound for Asia. The son of a Georgia plantation owner and an African slave from Mali, Healy quickly became an expert seaman. During the Civil War, he requested and was granted a commission as a third lieutenant in the U. S. Revenue Marine from President Abraham Lincoln.

After serving successfully on several cutters in the East, Healy began his lengthy service in Alaska waters in 1875 as the second officer on the cutter Rush. He was given command of the revenue cutter Chandler in 1877. Promoted to captain in March 1883, he then was given command of the cutter Thomas Corwin in 1884. Finally, in 1886, he became commanding officer of the cutter Bear, taking her into Alaska waters for the first time.

He became a legend enforcing federal law along Alaska's 20,000-mile coastline. In addition to befriending missionaries and scientists, he rescued whalers, Natives, shipwrecked sailors and destitute miners, according to the U.S. Coast Guard.

The captain often drove himself and his crew beyond the call of duty, as in 1888, when the Alaska whaling fleet was anchored behind the bar at Point Barrow to ride out a southwest gale. Four ships broke apart and sank, tossing the ships' crews into the icy waters. Healy and the Bear's crew saved 160 whalers.

Healy also assisted in serving the humanitarian needs and welfare of Native Alaskans through the introduction of reindeer to Alaska in order to replace the declining whale and seal populations, which were among the Natives' primary food sources.

While serving as second-in-command of the Thomas Corwin as it searched for the lost exploration ship Jeanette along the Siberian Coast in 1881, he noticed that the Chukchi people were able to sustain themselves by raising reindeer. In 1890, Healy used that knowledge to work with the Rev. Dr. Sheldon Jackson and famous naturalist John Muir to import reindeer to Alaska.

At his own expense, Healy transported 16 reindeer from the Natives of the Siberian Coast to the Seward Peninsula. In 1892, another 171 reindeer were added to the herd and Teller Reindeer Station was established. More reindeer followed. These selfless acts and humanitarian efforts helped Natives continue their subsistence ways and probably saved many lives.

Although he later was court marshaled for drunkenness and harsh treatment of his crew, he was called back into service following the Klondike Gold Rush and spent his last two years of service on Alaska waters aboard the cutter Thetis. He was forced to retire in 1904 at the mandatory retirement age of 64 and died the next year.

The 420-foot U.S. Coast Guard Cutter Healy, the largest cutter and polar icebreaker in the Coast Guard fleet, was named in his honor and put into service in November 1999. In September 2015, it became the first unaccompanied U.S. surface vessel to reach the North Pole.