Tales of The Beast and its admirers 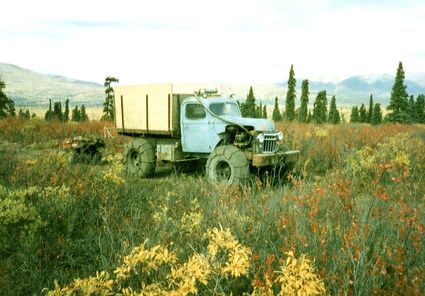 The Beast in hunting country in 1987.

While looking through a box of artwork a while back, I came across an 11-inch by 14-inch pencil drawing of "The Beast." At the bottom right corner were the words: "To Pop... Christmas 1990...love, Patrick." Back then our son was 14 and called his dad "Pop".

The drawing was framed in black construction paper and covered in plastic wrap secured with Scotch tape. Picture frame wire poked through the cardboard backing to form a crude hanger. This needs to be up on a wall, I thought, not buried in a box. There was a time when The Beast – a custom-made swamp buggy – was a very important part of our lives.

During the summer of 1978, while we were living in Glennallen for a year, my husband Gary bought the swamp buggy from a neighbor. A late 1940s two-ton Ford truck with a Marmon-Harrington all-wheel drive, it had big DC3 aircraft tires, but no engine, hood, radiator or grill. However, the potential was there for a superb hunting rig.

At that time, 2-year-old Patrick was beside himself with excitement the day this new purchase was towed from the neighbor's yard to my dad and mom's place with the help of Dad's backhoe. There in the neighbor's yard, Patrick not only saw the monstrous looking swamp buggy, which would later be dubbed The Beast, but he saw farm critters. Dad and Mom had a solitary goose named Gertrude. In the neighbor's yard, a whole gaggle of white geese appeared and Patrick pointed excitedly, telling his grandma, "more Gertrudes!"

When everything was ready for travel, Grandpa drove his backhoe, towing the swamp buggy, which Gary steered while Patrick and Grandma rode along as passengers in The Beast's cab.

Soon, Gary bought a Ford 302 engine locally and then a 1955 Willy's jeep, which he scavenged for parts. After hours and hours of work and help from his friend, Roy, Gary got the swamp buggy running.

Gary and Roy were the first to use it for hunting moose in the Nelchina area and later on the Paxton trail. Then for a few years, it sat idle during hunting season. Grandpa generously let it take up space on the back part of his property.

We were living in Palmer in the early 1980s, when Gary's friend, Larry, from his Atlantic Richfield job, wanted to combine The Beast with his two four-wheelers for a moose hunting trip. A new tradition was born and when word got out, more friends were included in the annual expedition.

For the next several years, The Beast was the workhorse of the hunting trips, hauling in hundreds of pounds of gear and hauling out hundreds of pounds of meat. Gary always drove, but the other guys took turns helping him steer over the hummocks. Finally, one of the hunting partners took it to Anchorage long enough to have power steering installed.

On what turned out to be the last trip in the fall of 1987, Gary drove it through a bog near Nelchina, which he thought was OK, only to have the fully loaded buggy break through the crust of ground and settle down into the muck up to its chassis. The 20,000 pound PTO winch mounted on the front wasn't enough to pull it out. After much work and the better part of a day, they were successful using two handy man jacks and small trees which they cut down and placed under the tires.

In the process of gaining freedom from the mud, a u-joint was damaged and once they got going again, it broke just a couple of miles down the trail. Lonnie, the guy who had the power steering installed, drove to Anchorage and bought a u-joint. He then flew it out to the swamp buggy, dropped it out of the plane and flew back to Anchorage. By the time Lonnie drove back out to the hunting ground, Gary had replaced the u-joint. In the meantime, all the moose meat was ferried out to the road with the four-wheelers. 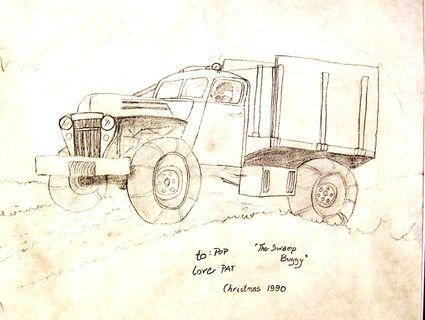 Getting stuck so bad took some of the fun out of the annual expedition. Not long after, the group of hunters began to disperse. Larry and his family were transferred to Singapore and Gary bought Larry's two four-wheelers. Patrick wasn't happy about talk of selling The Beast, but the excitement of having our own four-wheelers almost made up for it.

Through Gary's "horse trading" conversations, he eventually found an interested party for the swamp buggy and, sure enough, it went to a new home. In return, he received a dune buggy as part of the trade deal -- another irresistible machine for a young boy.

Now, all we have left of The Beast are special memories, a few photos and a pencil portrait drawn by a 14-year-old boy, which has been reframed and hangs in a special space of its own.