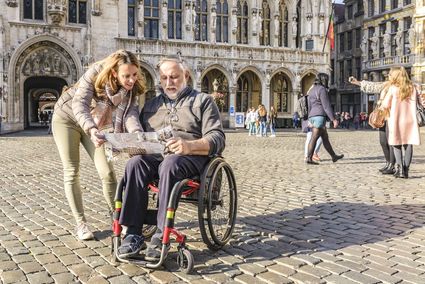 Belgium is a flat country, hence the name the "Low Countries," the collective name for The Netherlands, Belgium and Luxembourg because much of their land surface is at or below sea level. It is a perfect setting for traveling if you have a physical disability.

Coming in the year of the 100th anniversary of World War I, the "War to End All Wars," it is only fitting to consider a trip to this often overlooked European country.

For those of us of a certain age who learned to recite poetry at school, cemented in our memory is the haunting "In Flanders Field," by Canadian physician Lieutenant-Colonel John McCrae, who wrote it after the Second Battle of Ypres and which was the inspiration for the remembrance red poppies sold to this day on Veterans Day.

Belgium has many such surprises.

Originally showcased in 1958 at Expo 58 in Brussels, Belgian waffles were introduced to North America by a Belgian named Walter Cleyman at the Century 21 Exposition in Seattle in 1962. The waffles were further popularized in the United States during the 1964 New York World's Fair, introduced by Maurice Vermersch of Brussels. He decided to change the name to the Bel-Gem waffle upon observing that many Americans could not correctly identify Brussels as the capital of Belgium.

Served not only in restaurants, they are also a popular street food.

But my favorite in-the-hand food in Belgium is Pommes Frites.

Legend has it that during WWI, U.S. soldiers thought they were in France because everyone was speaking French and so when the Belgian locals served the frites they were considered French fries.

But these fries are so much better.

For one thing they're thick cut and fried twice in oil, occasionally with beef or duck fat added. Best of all, they're served with mayonnaise, but the good rich European kind from grass-fed European cows. There are other kinds of sauces served but I believe the mayo is the best.

So here are two dishes that have become American dietary mainstays and we owe that to the Belgians.

Perhaps the best-known fountain figure is the 15th century Mannekin-Pis. That naughty little boy nakedly relieving himself played an essential role in the distribution, oddly enough, of drinking water. Toward the end of the 17th century, the statue became more and more important in the life of the city as a water source and a symbol, surviving the bombardment of Brussels in 1695.

The bombardment of Brussels by troops of Louis XIV of France and the resulting fire were the most destructive event in the entire history of Brussels. The Grand Palace was destroyed, along with a third of the buildings in the city.

In the 18th century, Manneken-Pis was dressed

up in clothing at least four times a year and today, during big events, he is adorned with spiffy clothes. After losing his main function as water conveyance in the 19th century, Manneken-Pis became an image and symbol of Brussels folklore, the joy of its inhabitants and their capacity of self-mockery. It may be the most-photographed statue in Belgium.

The statue of Pieter Bruegel the Elder in Brussels celebrates Belgium's artistic heritage. In fact he turns 450 this year. He is considered the most important artist of the Dutch and Flemish Renaissance for his landscapes and peasant scenes.

The Art and History Museum is one of the largest in Europe. It has a room full of Haida art.

Belgium has many parts

As tribal as people want to be these days, some countries have pasts where they have regions that have distinct people and history. Belgium is one.

The Kingdom of Belgium is made up of three different linguistic regions: Flanders, Brussels Capital Region, and Walloon.

Bruges is a major city in the Flanders Region in Belgium. And Brussels is basically the capital of the European Union.

Namur is the capital of the Walloon Region, which is the largest of the three regions of Belgium. This German-speaking region has autonomy in foreign policies and is capable of executing treaties and pursuing its own foreign policies.

I remember a visit when there were still telephone booths in Belgium that had all three languages in the directions - German, Dutch and French. I spoke German at the time and was able to decipher the text.

While Europe has had its share of wars, battles and feuds, Belgium boasts some of the most significant.

Waterloo, a town nine miles south of Brussels, is the site of the final defeat of Emperor Napoleon I in 1815.

According to Wellington, the battle was "the nearest-run thing you ever saw in your life." Napoleon abdicated four days later, and coalition forces entered Paris on July 7th. The defeat at Waterloo ended Napoleon's rule as Emperor of the French and marked the end of his hundred days return from exile. With the end of the First French Empire it also ended serial European wars and established decades of relative peace.

South of town, overlooking the battlefield, the Lion's Mound is an artificial hill topped by a cast-iron lion and at its foot is a rotunda housing a panorama of the battle, essentially a panoramic painting. Nearby, the Memorial 1815 is an underground center illustrating the battle's historic importance. 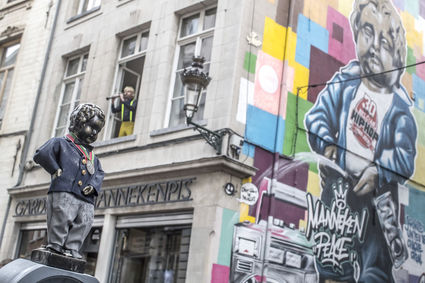 The Manneken-Pis statue of a little boy relieving himself is one of the most recognizable works of Brussels. Residents have fun sneaking costumes on it.

Slow and easy, scenic and flat, hiking the Sonian Forest is like a stroll.

The woods are a10,920-acre forest at the southeast edge of Brussels filled with ancient beech and oak trees, it teems with local wildlife. It was formally made a UNESCO World Heritage site in 2017.

The forest is an excellent place to hike to see much of Belgium's native plants and animals. Passing through well-maintained trails, along lake shores and through thick green foliage, you might see some of the forest's 40 species of mammals.

Visit http://www.sonianforest.be/see-and-experience/walking/ for a map and directions of how to get there, or take a walking tour, see https://www.explore-share.com/trip/1-day-guided-hiking-in-the-sonian-forest-foret-de-soignes-in-brussels/ for more information.