A working adventure in King Salmon 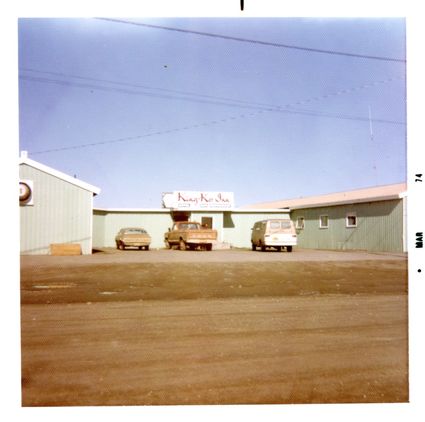 During my senior year at Glennallen High School, my husband-to-be, Gary, was hired by Woodruff Construction, who had the contract to build an addition to the high school end of the K-12 building. After our wedding the end of the school year in May, 1973, we moved to Anchorage where Gary continued to work for Woodruff. Through Woodruff, he was hired by Mercer Construction to be part of the crew which would do remodel work at the King Salmon Air Force Base.

Gary was excited at the opportunity to travel to a new area of Alaska and earn $10 per hour plus room and board. I, on the other hand, was not happy about the prospect of being apart for three months.

When the crew flew to the new job site mid-August, Gary planned to check out the situation to see if I could join him. I was so happy to receive the phone call telling me to buy a ticket to King Salmon. We would be staying at the King Ko Inn. There would be no place to cook, so I didn't need to bring kitchen stuff. I immediately decided to take my sewing machine, some materials and patterns and looked forward to being able to sew during the hours he was at work.

Gary met me at the airport one afternoon in late August and showed me the town and our new living quarters. He had moved out of the trailer occupied by the crew and rented us a room in the King Ko Inn for $28 a day. For that price, I imagined a nice spacious room. I was a little disappointed to open the door and find just enough space to hold two double beds with a two-foot aisle down the middle. A lamp table separated the beds at the head and at the foot of each bed was a shelf supporting a clothing rod. The bathroom and showers were down the hall.

The next morning it didn't take me long to settle in, using that extra bed to help arrange our belongings. Around noon I went down to the restaurant for some lunch. Not having even a refrigerator was going to be tough and I didn't want to spend a lot of money eating out. At lunch I met the two motel maids and told them they didn't need to clean room #10 as I had already made the bed and was planning to stay a while.

As I talked with them, I learned that one of the ladies, an Air Force wife, would be leaving the next week. Her husband was being transferred. Did I want the job? $2 an hour and one free meal a day! I discussed it with Gary that evening. The next morning, I worked up my courage and went into the bar to tell Wilkie, the manager, that I was interested in the motel maid job. He asked me a few questions and then said okay.

So, for the next two and a half months I cleaned rooms and sewed seven days a week. On the days we finished early because the King Ko Inn was not full, I didn't even earn enough to pay for my half of our room. Other days every room was booked with hunters.

One time a party had checked out late and another party came in on the evening flight. I was summoned to go clean the three-man trailer while they waited in the bar. The King Ko Inn included 10 regular rooms, four large rooms with two shared baths, a six-man trailer, and a three-man trailer.

Each evening the construction crew and I would go to the King Ko restaurant or the only other restaurant in town, Arne's, for dinner. Gary always paid for my dinner on a separate ticket. Sometimes when they all just wanted to sit around and talk in the evening, I would go back to our room and sew and listen to the radio.

I always wore my long robe if I had to walk down the hall to use the restroom in the middle of the night.

Most trips I was happy not to run into anyone. One night, though, I was surprised to have to walk through a group of five or six young men just hanging around. I could tell they weren't hunters. The mystery was explained when we went to clean the two large rooms the next morning. Apparently two women had flown in from Anchorage on the evening flight, "worked" all night, and left on the morning flight. I never met them, but certainly heard about them.

In the meantime, the construction crew worked hard seven days a week from 8 a.m. to 6 p.m. out on the base. The first two weeks they replaced all the floor joists under one long barracks building. Then they re-did two large showers and two large dressing rooms, stripping out the old tile, reframing and then retiling. It was all very physical.

About two months into the job, the boss, Jerry Mercer, declared a one-day holiday, the first and only day off. One of the crew, Vern, had his Piper Cub and Jerry rented a Piper Cherokee. We left early in the morning, landed on the beach near Egegik, and spent the day duck and geese hunting. Taking off from the beach that afternoon was questionable since the warm sun had dried out the sand and we had a heavy load of birds and Japanese float balls. I didn't realize how concerned the pilots were until I heard them talking later when we were safely back home.

One of the crew had a pressure cooker and a Coleman stove. The bird's breasts were floured, fried and then pressure-cooked. Delicious!

Wilkie called me into the bar one lunchtime. "I heard you had a birthday yesterday," he announced. "Yes," I replied. "So how old are you?" he asked. "18," I answered. "I didn't know you weren't 18 when I hired you. I shouldn't have hired you," he scowled.

I didn't know what to say. He hadn't asked and I hadn't thought to tell.

Gary's job ended two weeks later. We packed up, flew home, and wondered where the next job location might take us. 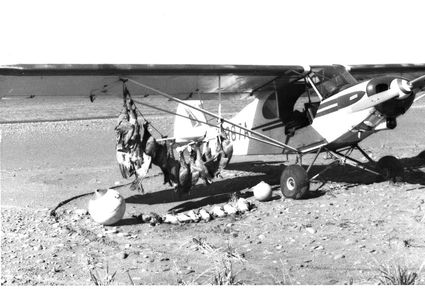