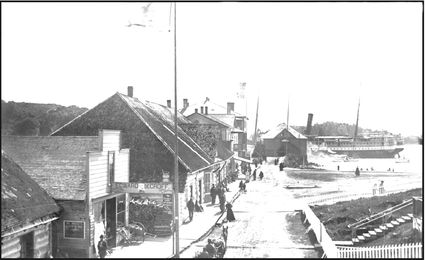 Shortly after Russia transferred Alaska to the United States on Oct. 18, 1867, in Sitka, pictured here, questions arose about the $7.2 million purchase price.

One hundred and fifty-two years ago, a ceremony held in Sitka transferred Alaska from Russia to the United States. The agreed-upon purchase price of $7.2 million had been paid earlier in the year.

It didn't take long after the American flag replaced the Russian flag on Oct. 18 for conspiracy theorists to start speculating that America had not paid that full amount for what some called "Seward's Icebox." Many people thought that the United States government was involved in a cover-up that involved a political payoff to the Russians.

The amount of money paid to Russia by America was not in dispute. The check was indeed issued for $7.2 million. But some people thought that the actual purchase price of Alaska was much less and that the check issued included a payment to Russia for sending its naval fleet to the East and West coasts during the American Civil War.

In 1939, historian Marriette Shaw Pilgrim wrote that during the Civil War, Great Britain and France threatened to recognize the Southern Confederacy and disregard the blockade imposed by the North. So the Czar of Russia sent the Russian navy to put on a friendly demonstration in both New York and San Francisco ports in 1863. Pilgrim concluded that Alaska only cost around $1.4 million and the balance of that big check was a payoff to the Russians for their show of support for the Union.

Research into this matter found that this was a widely held conspiracy theory at the time. But the truth is that America wanted to buy Alaska well before the Civil War.

Secretary of State William Marcy and Democratic Congressman William Gwin from Mississippi inquired in 1843 whether the Russian colony was for sale. The Russians did not want to sell at that time, but the two expansionists made their interest in the colony known.

Then-Senator Gwin again approached Russian officials with an offer of $5 million in December 1859.

A few months later, Russian officials replied that the offer was too low but an inventory of assets in their northern colony was underway and once they had an idea of its value they would be in "a condition to treat."

The Russian-American Company's capital, mostly consisting of furs, goods, real estate and sea-going vessels, tallied up to $4.4 as of early 1860. So had America again offered the Russians $5 million, it is possible they would have accepted the deal.

But the American Civil war broke out so negotiations were put on hold until 1867.

Later research into Russian archives revealed that European powers were edging closer to war over Polish independence and Czar Alexander II, knowing that his meager naval fleet was weak, decided to send it to America to prey on British and French commerce to keep it safe from attack.

The unintended consequence of the fleet coming to America is that it boosted Union morale and made the British and French think twice about openly recognizing the Confederacy.

So it appears that the legend of America hiding a payment to Russia in the check paid for Alaska for services rendered during the Civil War is a myth.

In defense of Ms. Pilgrim, however, it must be noted that she published her book in 1939 and based it on written accounts of opinions at the time – before researchers were allowed to examine Russian records and learn Alexander's true reasons for sending his fleet to America.