A heartfelt thank you from Cooper Landing seniors 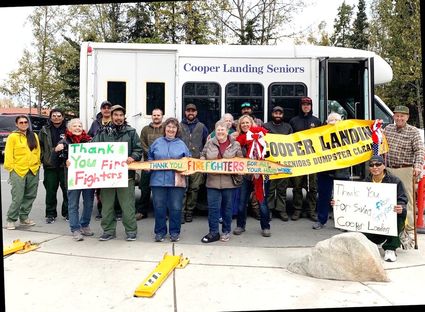 Cooper Landing seniors pose with firefighters during a special First Responder BBQ celebration at Soldotna Creek Park, organized by Sen. Peter Micciche on Sept. 9. The seniors filled a bus and others went in private cars to the event, said Mona Painter, of Cooper Landing Senior Citizens Center, Inc. The BBQ coincided with the turnover of firefighting crews, she said in an email to Senior Voice. "People cheered and clapped whenever a group arrived at the BBQ, many right from the fire lines in their blackened clothes and with soot-streaked faces," she wrote. "[I] just can't imagine working as they did when the temperature was in the 80s so many days and them carrying heavy packs and swinging pulaskis while the underbrush and ground burned and trees fell." The community was on the evacuation scale "Ready, Set, Go" for almost a month this summer, with eight of those days being in the "Set" position, Painter said. Some residents were forced to leave due to smoke from the Swan Lake Fire. Among the many groups of firefighters were the Great Basin Incident Management Team 1 and the Canadair CL-215 Super Scooper air tankers, which flew down and scooped water out of Kenai Lake to take up to the Trout Lake-Shaft Creek area, where fire burned within two miles of Cooper Landing homes. In late September, the community was in the good hands of Type 2 Northern Rockies Incident Management Team 4, who continued with fire suppression, cleanup and rehabbing, Painter said. She added that the seniors appreciated the online updates available through Kenai Peninsula Borough Office of Emergency Management and the weeks of their daily visits to Snug Harbor Senior Haven, where fire personnel left maps and other information at both of the commons.