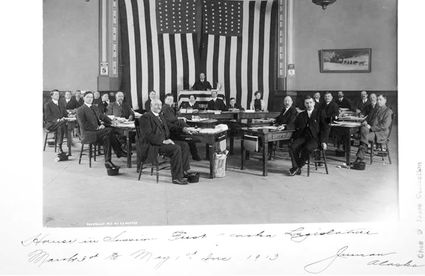 The first Alaska Territorial House of Representatives meeting in Juneau on March 3, 1913.

Americans have been casting ballots on the first Tuesday in November since the mid-1840s. Why November and why Tuesdays?

The answer goes back to our founding fathers when agriculture was prominent. Congress used to meet in December and adjourn in March every year because that's when farmers could get away from their land. A 1792 law established that elections should be held some time in November to give time to count the votes before the new congressional session started.

Americans also began officially voting on the first Tuesday following the first Monday in November in the mid-1840s to accommodate farmers. Since most citizens worked as farmers and lived in rural areas about a day's travel from polling places, that gave them Monday to travel, Tuesday to vote and Wednesday to participate in market day.

Alaskans held their first election for their first legislature after becoming a territory of the United States. As a possession, the people of the Last Frontier did not have much voice in their governance after Russia turned Alaska over to the Americans in 1867. But when Alaska became a territory in August 1912, the people at last were allowed to establish their own legislature – although the U.S. President still appointed Alaska's governor.

On Nov. 5, 1912, Alaskans went to the polls to select eight senators and 16 representatives to fill the seats of their first Territorial Legislature. Four months later, those elected lawmakers – the majority of which had campaigned as nonpartisans without any party affiliation – assembled in the newly proclaimed capital of Juneau to represent their constituents.

A few of them went above and beyond to make sure they were in attendance at that historic gathering. In fact, four successful candidates from Nome – Conrad Freeding, Frank Aldrich, J.C. Kennedy and Tom Gaffney – packed supplies in sleds, hitched up their dog teams and left Nome on January 7. They mushed about 300 miles, and then stopped for a rest at Ruby, where Ruby's new legislator, Dan Sutherland, joined them.

The five men mushed on to Fairbanks, approximately 230 miles, where they again rested before pushing on to Valdez, more than 360 miles away. The last musher pulled into Valdez on February 13. The men then boarded the steamship Northwestern and traveled south to Juneau.

Two other men on that first ballot in November 1912, also from Nome, were so confident they would win that they headed south before the election was held. Charles D. Jones and Elwood Bruner left Nome for Juneau on the last southbound steamship of the season at the end of October. And they were right – they both won their bids to serve.

Eight senators and 15 of the 16 elected representatives from Nome, Ruby, Fairbanks, Seward, Valdez, Skagway, Douglas, Juneau, Sitka, Wrangell, Ketchikan, Fox, Knik, Iditarod, Candle and Katella made it to the newly proclaimed Alaska capital in time for the opening session. The missing sixteenth was a Fairbanks man, J.J. Mullaly, who had left Alaska before the November election returns were in; he failed to return to the territory to claim his seat.

There was grumbling, then as now, about the difficulties of getting to Juneau. Although those grumblers complained of late-winter trips by dog team to an ice-free seaport to catch a ship south instead of via airplanes through inclement weather.

The first law that our first legislature passed? A bill that enfranchised women. It took another six years before the nation adopted women's right to vote.

This column features stories from late Alaska historian Phyllis Downing Carlson and her niece, Laurel Downing Bill. Many of these stories fill the pages of "Aunt Phil's Trunk," a five-book Alaska history series available at bookstores and gift shops throughout Alaska, as well as online at http://www.auntphilstrunk.com and Amazon.com in both print and eBooks. Volume One also is available on Audible.com.